Mirrodin Besieged’s Mirromancy was in some ways the most intriguing Intro Pack release of the block. Since the transition from the Theme Deck to the Intro Pack which begun with Shards of Alara, set-released precons have tended to follow a rather simplistic strategy: load up with creatures, and use noncreature spells as support. Although a viable strategy, like anything else it can grow stale with overuse. The Theme Decks had a long tradition of variety, with a number of decks leaning more heavily on spells rather than creatures (most famously The Sparkler from Stronghold, which had only three creatures- and two of them Walls!). In many cases, like the decks of Magic 2011 or even Conflux’s Naya Domain, even a relatively high noncreature content didn’t necessarily mean that they were going to take anything other than a back seat to your beaters.

Mirromancy for the first time in the modern Intro Pack era turned this formula on its head. Your spells weren’t there to support your creatures- they were legitimate and consistent win conditions of their own. Indeed, the deck’s foil premium rare- which usually gives good insight into the deck’s aims and means- itself was designed to support a spell-heavy deck. Sure Galvanoth was a 4/4 body, but his free-cast ability thrived on a spell-rich (and by necessity somewhat creature-poor) environment. Blisterstick Shaman was a ping-on-a-stick, and Fire Servant was there to support your burn cards. In that light, Eldtritch Onslaught is Mirromancy’s successor, right down to the Izzet colour scheme of Blue and Red.

Moreso than Mirromancy, Eldritch Onslaught is heavily skewed away from creatures, and their subordinate role is even more pronounced. The deck looks to capitalise on the flashback mechanic, a returning ability taken from 2001’s Odyssey, which lets you replay a spell card from your graveyard (usually for an increased cost). A full 13 (ha!) of the deck’s 21 noncreature spells are armed with this mechanic, and the deck’s engine in part consists of ways to fill your graveyard at an artificially fast rate. In that sense, it encourages you to regard your graveyard as a ‘second hand of cards,’ a resource to expand the options available to you in the course of the game.

So what are these options? With spells being the primary focus of the deck, we’ll begin our analysis there- a welcome break from the norm.

The Fury of the Dead

In contrast to the removal-poor decks we’ve covered thus far (Carnival of Blood, Repel the Dark), Eldritch Onslaught happily lives up to its name. Your opponent’s creatures shouldn’t give you a ton of trouble with the burn and bounce packages you have at your disposal. First, the burn. The suite of cards here is a little awkward and inconsistent, which is reminiscent of New Phyrexia’s Feast of Flesh. There as here, the removal is wildly disparate, and you can’t cound on anything showing up consistently. For instance, Geistflame deals a single, lowly point of damage at instant speed. Useful sure, but it’s no Lightning Bolt (or even Shock). However, it offers some flexibility with flashback, letting it be cast later from your graveyard for an additional four mana.

Next up is your X-spell of sorts, Harvest Pyre. The Pyre can do a tremendous amount of damage to a creature very cheaply, provided you’ve managed to stock your graveyard well enough. It’s a clever trick, though it does suffer from an inability to give you reach across the table to your opponent. The same goes for Into the Maw of Hell, the evocatively-named land destruction spell that also blasts a creature for 13 damage in the process. We’ve noted before how R&D has transitioned land destruction into a “package deal” with other effects, justifying the necessity to raise its cost past Stone Rain. For instance in Standard alone, Demolish can take out an artifact or a land, Desecrated Earth forces discard, and Melt Terrain adds a Shock’s worth of damage to your opponent. Into the Maw of Hell slots in perfectly with these effects, effectively killing nearly any creature it targets.

Then there’s Rolling Temblor, a spell you’ll have to be careful to play around since- like most any sweeper- it can clear your board just as easily as your opponent’s. Still, the deck is insulated against some of the worst of it by the fact that most of the creatures in Eldritch Assault have a toughness of three or more. Finally, you have a pair of Burning Vengeances to even everything out. Innistrad’s version of Rage Extractor or Rumbling Aftershocks, there usually seems to be an enchantment in Red that deals damage based on a set’s mechanics firing off, and the Vengeance will give you plenty of extra burn once your deck starts to get going.

Adding to your arsenal is a playset of bounce, though it should be noted that all four cards in this category are sorceries. Bounce is typically found at instant speed, so some of the versatility it allows you (saving a creature from death, or preventing an opponent from enchanting one of their own) is hindered somewhat. You still have the ability to remove a defender from the combat equation, and enchanted or equipped creatures will still make tempting targets. Silent Departure is Innistrad’s version of Unsummon, trading in its speed for flashback. Meanwhile, Grasp of Phantoms is a pricier version of Excommunicate, in a colour we don’t see a lot of such effects fall into. Although it isn’t cheap, it does deprive your opponent of a draw step (they’re effectively drawing the same card twice). Two copies of each are in the deck.

Our next suite of cards is card drawing. Spell-heavy decks, like aggro decks, have a tendency to run out of cards as the game goes on, and keeping your hand full is imperative. Towards that end, you have two each of Desperate Ravings and Think Twice. As each of these can be rebought for only two mana, you should manage to get two cards apiece from them over the course of the game.

Finally we arrive at the deck’s milling package. These are cards which help transit your library into your graveyard. Ordinarily this is something you might prefer to do to your opponent, but the high number of flashback spells and cards that benefit from a well-stocked larder offer you a compelling reason to dump as many cards as you can. First you have a pair of Curses of the Bloody Tome, which allow automatic mill at every upkeep. There aren’t a lot of curses you’ll want to play on yourself, but this one’s baneful effect can be a blessing if built around. But you needn’t worry about relying solely on the slow trickle of cards it affords you each turn to stock your graveyard, you have a few other effects to help you along.

The Ghoulcaller’s Bell has a simple, steady effect- each player mills a single card upon activation. It’s a cheap trinket, and one as like to help your opponent just as much as it helps you should they also be using flashback cards, but it also combines well with Grasp of Phantoms should the creature you’ve banished to the top of their library be something you’d prefer not to see again. A trio of Dream Twists provide a healthy dose of mill, and can flashback for another go. And then there’s the Cellar Door, which not only gives you a small dose of mill, but also offers the opportunity to squeeze out a few 2/2 Zombie tokens onto the battlefield in the process. 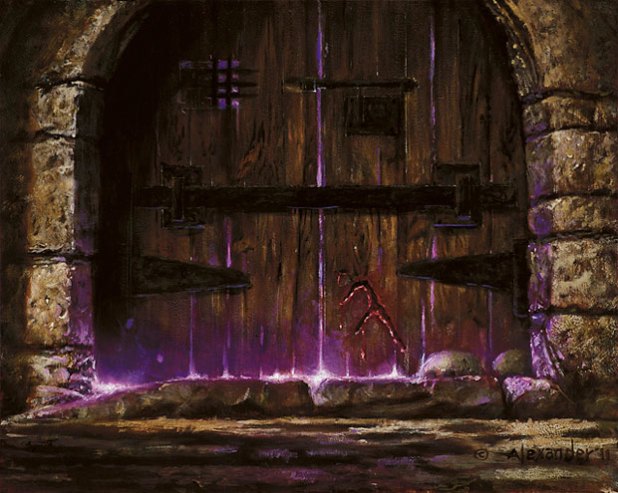 Last Words of the Dying

If we’re serious about milling ourselves to open up extra flashback options, we can’t limit ourselves to just the handful of parlor tricks discussed above. No, it’s going to take some real dedication to the cause, and that’s where your creatures come in. From top to bottom, you have a number of mill engine enablers amongst the ranks of your beaters to ensure you consistently gain virtual card advantage over your opponent. First up we have a trio of Deranged Assistants, which mill you for a card even as they provide you with an extra dose of mana. Twin Merfolk Mesmerists mill for a pair of cards, while the Armored Skaab gives you a one-time chunk of four. The Skaab is a highly useful creature here, given his four toughness. You can be certain that your opponent won’t be sitting back watching you scour your graveyard for more spells, so Eldritch Onslaught gives you some defensive tools to keep your opponent’s beaters in check. In addition to the Skaabs, there are a pair of Fortress Crabs custom-tailored to this very purpose, and can stop nearly anything thrown at them.

Beyond that, your remaining creatures give your deck some real muscle. You won’t be flooding the red zone with weenies to overwhelm your opponent, but rather bottling them up with your spells and effects, then leaning on a beater or two to work down their life total. The Pitchburn Devils are only 3/3’s, but they come equipped with a Lightning Bolt that triggers when they die. The Scourge of Geier Reach begins life at the same size, but gets larger depending on how many creatures your opponent is playing. It doesn’t take much for that five-mana pricetag to start to seem like a real bargain. The Murder of Crows is a strictly better Air Elemental in that it also allows you to loot whenever another creature dies, yours or otherwise.

Finally, we arrive at the deck’s two rares. The Charmbreaker Devils exist somewhere at the intersection of Surreal Memoir and Kiln Fiend. Returning a sorcery or instant card at random from your graveyard to hand each turn, they give you the potential for an extra use for almost any of your spells. They also gain a substantial power bonus each time you cast an instant or sorcery. The deck’s foil premium rare is the Sturmgeist, an aerial beater whose power and toughness are determined by the number of cards in your hand, and which has a built-in Curiosity.

Before we finish our review, let’s take a look at the deck’s mana curves.

Here’s a third curve, which includes spells at their flashback costs as well as their normal casting costs.

Our next task will be to take Eldritch Onslaught into battle, and report on how it fares. Will it manage to congest the red zone long enough to crank up its self-milling engine? Will it consistently gain advantage from this engine in excess of the resources and effort needed to establish it? Only the battlefield will tell…