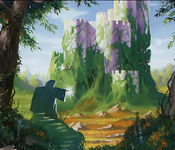 We’re now officially halfway through our 7th Edition coverage as we head back through time to the advent of the Core Set precon deck. To mark the occasion, I’ll be giving Way Wild a spin- a mono-Green stompy construction with a touch of ramp to help smooth out the curve. Playing against me is Jimi, piloting (fittingly enough) Bomber, the mono-Blue counterpart. With a few fat beaters of her own (and some countermagic to back it up), we sat down to see how the decks would fare against one another. Here are our notes from the match!

Although Jimi’s on the play, I land the game’s first play with a turn-2 Grizzly Bears, though Jimi’s not far behind next turn with a Wind Drake. After swinging with the Bears for an opening 2, I then summon some acceleration in the form of a Fyndhorn Elder.

It’s now turn 4 and we’re only just getting started. Jimi sends in the Drake for 2 of her own, then shores up her ground defenses with a Horned Turtle. This leaves her incapable of a counter, so I take the opportunity to play a Rod of Ruin. It’s not the most impressive card- frankly, part of me really wanted to add a creature- but I know that her deck has a number of 1-toughness utility creatures, and this will keep them from seeing play. If Jimi’s concerned, she doesn’t show it as she untaps and lays down a Wall of Air after attacking for 2 more in the sky. Back to me, I go big with a Gorilla Chieftain and Trained Armodon, figuring with her defensive position solidly in place my only out now lies in numbers.

Jimi sits back on turn 6, content to just send the Drake sailing above my beaters and leave me at 14. Back to me, I go on the offensive, swinging with the Bears, Armodon, and Gorilla. Jimi blocks with the Wall and Turtle, taking 3. I then brave her open mana to deploy a Redwood Treefolk. Once it resolves, I add a Llanowar Elves and pass. Next turn Jimi adds some muscle of her own in the form of an Air Elemental, attacking again for 2. I send in the zoo again, same as before but with the Treefolk in the hunt as well. The blocking doesn’t change, but the extra body means I’m hitting in for 6. Jimi’s now down to 9. With two Islands up I crush one of them with a Creeping Mold and pass.

Now turn 8, Jimi decides to try and race me and she attacks with both Elemental and Drake. That puts me at 6, one turn away from lethal. She plays a Thieving Magpie and passes. Not surprisingly, I throw everything at her, and four points of damage manages to get through. Perfect- I drop a Giant Growth on the Llanowar Elves for three more damage, and put the game away with the Rod of Ruin for the death. A close one! 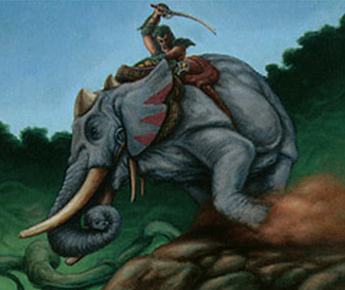 Another slow start sees Jimi with a Merfolk of the Pearl Trident and Prodigal Sorcerer and me with a Trained Armodon by the end of turn 3. The shoe’s on the other foot this turn, with Jimi’s pinger ensuring all of my 1-toughness rampers won’t see play. Jimi’s turn 4 is a blank, while I send the Armodon in for first blood after smashing one of her Islands with a Creeping Mold.

Now turn 5, Jimi does a little restructuring thanks to a Sage Owl after attacking with the Merfolk for 1. I attack again for 3 then add a Giant Spider. Pinged by the Sorcerer at the end of my turn, I’m now at 18 life, Jimi at 14. Next turn sees Jimi add a Fighting Drake, while I send in the Spider and Armodon for another 5 points of damage. Jimi blocks the Armodon with the Drake, so I throw out a Giant Growth to finish the job. I then play Grizzly Bears and pass, after another ping.

A turn-7 Wind Drake replaces the fallen Fighting one, then Jimi attacks with the Sage Owl for 1. I swing back for 7 with the Spider, Armodon, and Bears. Jimi blocks the Bears with her Merfolk, using the Sorcerer to force the trade, but the other two get in for 5, leaving Jimi at 7. I tap out to play a Spined Wurm, but Jimi shows the Force Spike to counter it. Next turn she finds some salvation in the form of an Air Elemental after sending in her Owl and Drake for 3. I play a Pride of Lions and pass, get pinged at the end of it for my troubles.

Jimi sends the Air Elemental in on turn 9, and I’m down to 8 life. I swing back for 9, though, with my Armodon, Spoder, and Lions. While she kills the Armodon by blocking with the Drake and pinging with her Sorcerer to finish it off, the Lions get through for 4 and it’s then that Jimi realises her mistake. With their special ability, the Lions will kill her next turn whether blocked or unblocked- her best play would have been to kill them off with the Air Elemental on the block. She buys the luxury of a turn with a Boomerang and digs for an answer with Ancestral Memories, but comes up with nothing. In the end, the Lions are resummoned, and they do her in the next turn.

Jimi leads with an Island while I manage a Llanowar Elves off of my opening Forest. Next turn Jimi lands a Coral Merfolk, but sadly I have nothing with which I can take advantage of my fast start, and simply play another Forest. Jimi siezes the opportunity to play a Daring Apprentice, then I Creeping Mold away one of her Islands.

Now turn 4, Jimi replaces the lost Island and plays a Horned Turtle after attacking with the Merfolk, while I go for the Spined Wurm, a fat beater which gets countered by Jimi’s Apprentice. Next turn Jimi presses her unexpected creature advantage with a 3-point attack, while I attack back with the Elves before playing a Pride of Lions. Jimi casts Inspiration at the end of my turn to refill her hand.

The Lions forestall another attack, but Jimi instead plays a Sage Owl and rearranges the top of her library. Back to me, I enchant my Lions with Regeneration and attack in with them for 4, taking Jimi to 15. Next turn Jimi adds a Prodigal Sorcerer and attacks with the Owl for 1. I chip away with the Lions again, then add an Ancient Silverback, pleasantly surprised when it resolves.

The Owl comes in for another peck on turn 8, but Jimi has no other play. With the tide turning, I attack with the Lions and Silverback. The Merfolk are shoved in front of the Silverback and explode, but the Lions get in for another 4. At the end of my turn, Jimi snipes the Llanowar Elves with the pinger. Next turn Jimi goes for the Thieving Magpie in what smells of desperation while I attack with both beaters again. The Turtle chumps the Silverback while the Pride of Lions gets through, and without a counter Jimi is helpless as I add in a Giant Growth for lethal.

I’ve stated before that I’m not the biggest fan of Green, particularly mono-Green stompy archetypes, but I do have to admit that the simplicity bound up in these 7th Edition decks made it rather fun (not that mono-Green is ordinarily mind-bogglingly complex, that’s one of it’s charms). It played out very simply- ramp if you can, and dump your hand of creatures onto the board. Find the right mix of numerical and qualitative superiority and smash face, turn after turn, until the desired outcome is achieved (or put beyond reach). As you can see, Way Wild did this quite well here.

To be fair, Bomber certainly held its own- both the first and second games were fairly close affairs, and Jimi just had too little disruption in the third. There wasn’t a lot of complexity to my gameplay, though some of the variety kept it interesting, in particular the Pride of Lions and the Creeping Mold. The Mold is a very solid inclusion for spot removal in a colour that typically has the least amount available, and Bomber’s lack of enchantments and artifacts meant that it was effectively landkill all the way through, but it certainly helped.

I couldn’t see playing a dozen or so games with Way Wild and have it maintain this level of interest as it is something of a one-note song, but for what it does it did it well, and in life you can’t ask for much more than that.