Our final match of the set, as we prepare to take our (very temporary) leave of Mirrodin, at least until the release of New Phyrexia right around the corner. For our final showdown, I’ve got Sam and Sacrificial Bam to look forward to, while I pilot the fun-with-affinity deck Bait & Bludgeon. One of our readers recently commented that the thing they enjoyed most about this series of reviews is that it has permitted those of us who weren’t active players during this release to see what Mirrodin was like before the Phyrexian plans started to hatch. It might well be so that Wizards had the Scars of Mirrodin-block sequel in mind when they said goodbye to this metallic world neatly seven years ago, but for many of us this is a first-time exploration of a world grown only recently familiar.

With that sentiment in mind we squared off for the customary three games, and here are our notes.

Sam starts strong with a turn-1 Disciple of the Vault, exactly what her deck wants to see each game. I play a Swamp, then she follows up with a Pyrite Spellbomb and a 1-point attack. I manage an Aether Spellbomb followed by a reduced-cost Tooth of Chiss-Goria. The flash of the Tooth is a nifty trick, but early in the game it’s put to better service by upping my artifact count.

Another 1-point nick greets me on Sam’s turn 3, after which she deploys a Talisman of Indulgence. I look to stop the attacks with a Bottle Gnomes, not the fiercest of defenders but suitable for the task at present. Next turn, Sam wheels out the Nuisance Engine, while I tap out to play an Aether Spellbomb followed by a deeply-discounted Myr Enforcer. With a proper defender for the moment, I bloody the Gnomes in the red zone, adding a point of damage with the Tooth. We’re now even at 18 apiece.

Now turn 5, Sam makes a Pest token and adds a Necrogen Spellbomb. I send in the Myr Enforcer- Sam chumps it with the Pest and I lose 1 life from the Disciple. Still, my Gnomes get through and hit for 2. I follow up with a second Myr Enforcer, and my board position is looking good. Next turn, Sam adds a Cathodion and stays put. This has been a terrible game for the both of us with our mana bases- I’ve been stuck at three land, Sam at two plus the Talisman. The Cathodion tapped Sam out, so her Pyrite Spellbomb is no threat this time and I swing with the team. Sam lets it pass and drops to 6 life.

Sam makes another Pest to start turn 7 and follows up with an Atog. I play a Serum Tank, then send in the troops. It doesn’t go quite as hoped- Sam makes a Pest (which at least adds a counter to my Serum Tank), uses the Pest to block one of my Enforcers, blocks my second Enforcer with the Atog and blocks the Gnomes with the Cathodion. She then pops the Pest and her Necrogen Spellbomb to make the Atog a 5/6, killing my Myr. I pop the Gnomes as well, but with all this sacrificing and dying I still come out behind, losing 1 net life. I’d forgotten how explosive Sacrificial Bam can be, as Sam goes for the throat the very next turn. With me defenseless, she plays a second Disciple of the Vault. She then sends in the Atog and sacs every artifact she has- a total of seven of them after making a Pest. I lose 14 life from the twin Disciples alone- the 15/16 Atog lumbering through the red zone delivers the coup de grace.

We both lead off with Vaults of Whispers this game. I use mine to land an Aether Spellbomb, while Sam uses hers to deliver one of those vile Disciples of the Vault. next turn I add the Tooth of Chiss-Goria, while Sam assembles her combo with an Atog after attacking for 1 with the Disciple.

It feels like deja vu all over again as I land a turn-3 Bottle Gnomes before Sam lands her Nuisance Engine, followed by my turn-4 Serum Tank. back to Sam, she plays a second Disciple of the Vault and I know I’m in for it as she’s already added two Great Furnaces to her board. She attacks with the Atog and makes/eats a Pest token, so down go the valiant Bottle Gnomes. I just need to stall for a little more time as I’ve some solid options in hand.

My turn 5 is a lamentable blank, but at least it leaves me free to Assert Authority when Sam attempts a third Disciple of the Vault. She adds a Leaden Myr, makes a Pest and offers it to the Atog to smack me for 3 (and an additional 2 from the Disciples). Back to me, I finally draw my fourth land, which means my Irradiate has come on-line. Rather than let Sam play around it at her leisure, I hit the Atog with it to force some sacrifices now when it counts (her being tapped out means no free outs with a Pest token). She pitches a Great Furnace and the Leaden Myr to keep the Atog alive.

It ends up not mattering a jot. In comes the Atog, and again she sacs her board to kill me.

I draw into about as good a start as Bait & Bludgeon can get. I play a first-turn Swamp and pass, while Sam uses a Mountain to fuel a turn-1 Pyrite Spellbomb. Next turn it’s an Island and a Talisman of Dominance for me, an Atog for Sam.

Turn 3 is where my deck hits the turbo boost, playing two more Talismans and an Aether Spellbomb before passing. Sam drops a Vault of Whispers and a Nuisance Engine, attacking for 1 with the Atog. Now turn 4, I reap the fruits of my artifact garden. The free Frogmite is nice, but the 5/5 flying Broodstar leaves Sam uncharacteristically speechless. Back to Sam, she creates a Pest, attacks with the Atog (sacrificing the Pest to it), then pops the Pyrite Spellbomb to kill off the Frogmite, reducing my artifact count by 1 (making the Broodstar a 4/4).

A minor setback- my turn-5 Seat of the Synod and Bottle Gnomes pump the Broodstar up to 6/6, and it flies over Sam’s fortifications without worry. Sam follows with a Vault of Whispers and a Skeleton Shard, repeating her Atog/Pest trick to leave me at 13 life. Obviously without a couple of Disciples it’s lost some of its teeth. Back to me, I play a Serum Tank and now empty-handed I immediately activate it to draw another card. The Broodstar lumbers in for another 7 damage, cutting Sam in half. Sam draws, fiddles with the Atog a bit and ultimately scoops. A six-turn kill gives me some redemption of ego as we call it a day. 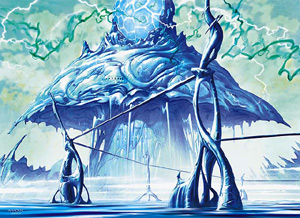 The deck generally works, though I’m not sure I can hold it too sternly against it that Sam’s deck simply worked better. Although the first two clashes were no great showing from Bait & Bludgeon, I had the singular pleasure of keeping a one-land hand on our opening friendly, then having no cards in hand by around turn 4 as I stormed and overwhelmed with cheap affinity effects. The problem is simply getting that initial push, because so much of the deck is overpriced until the affinity starts to kick in.

The problem the deck has is in some of the less solid card choices, which tend to dilute it down a bit and make for some awkward openings. Assert Authority is a perfect example- it’s a nice live-the-dream card in theory (a better Counterspell at the classic Counterspell cost!), but in practice its clunky and awkward, and there are much better options for threat management. The Tooth and Scale of Chiss-Goria are similarly meh options, but at least have the virtue of being affinity bridge-gaps in the low mana cost range that help up your artifact count.

Irradiate- the deck’s only real removal- suffers from clunkiness as well. I’d much rather have had a Terror here, which was reprinted in Mirrodin- though that doesn’t have the same thematic resonance that Irradiate does. It’s hard to escape the feeling that perhaps there’s just a little too much setup, and not quite enough payoff- though that turn-4 Broodstar was a bright, shining moment.

Hits: Superb showcase for the affinity mechanic; Broodstar an excellent showpiece for the set (and certainly sexier than Lodestone Myr, the deck’s other rare)