Thus far in our tour of the various shards of Alara, we’ve found three new keywords: Bant’s exalted, Grixis’ unearth, and Jund’s devour. The designers of the set wanted to give each shard its own identity through a mechanic, but for the last two shards on our list no keyword was needed. Instead, they have a more thematic approach, and for Esper that meant a new innovation- coloured artifacts. Sure there had been a smattering of these before, but Esper was designed to be dedicated to them fully- every Esper-themed creature is an artifact.

Esper in some ways is something of a mini-Mirrodin, a land where artifacts and artifice holds sway. Visually and conceptually distinction from Mirrodin, however, was achieved through the concept of etherium, a metal infused with Magic that could be not just grafted onto, but actually replace body parts and appendages. The most notable example of this is the iconic right arm of Tezzeret, but it extends to all living things on the shard.

This gives the shard’s denizens a cohesive look and feel, and Esper Artifice takes full advantage. Many of the deck’s cards care about artifacts in some way- either through direct interaction or passive bonus. Nowhere is this more prevalent than with the deck’s creatures, and so there we’ll begin.

Masters of the Craft

At its heart, Esper Artifice is a skies deck with a mechanical twist. The general goal of the deck is to win through aerial attrition, and the great majority (67%) of them either have flying or can attain it, as in the case of the Windwright Mages. As you might expect from a skies deck, Esper Artifice makes no pretense about the early game, but rather facours a steady progression as the game develops. This is represented in the deck’s linear creature curve quite obviously:

We’ll look at the deck’s air force first. It begins at the 2-drop slot with a pair of Tidehollow Strixes, which make fine attackers but whose deathtouch also permits them to be formidable defenders should you need to stall for time against a more aggressive opponent. Note that their dedicated casting cost means you have to have a particular mana base established to bring them out. With so few other early options, you may want to deploy your early-turn lands in the hope of drawing one, as this cuts off no other avenue for development and will occasionally deliver that turn-2 Strix.

Even more difficult to cast is a turn-3 Windwright Mage, as she requires one mana of each of Esper’s colours. Her lifelink is a solid addition, but her real charm comes when she’s granted flying. As this won’t happen until you’ve dropped an artifact into your graveyard, you generally won’t need to be in such a hurry to deploy her. As the rest of your flyers are in the 4-6 mana cost range, clearly you’ll want to be sure to hit your land drops as best you can- if the land dries up early, Esper Artifice will have a hard time getting off the ground.

Next level up, we have a pair of Tower Gargoyles to start us off. Amongst your beefiest bodies in the air, they’re cheap but exacting in cost. What you see is what you get here- there’s naught aside from muscle and wing. The Sanctum Gargoyle, in addition to being considerably easier to cast, however, also comes with a trick up its sleeve. When summoned, the Gargoyle allows the return of an artifcat from your graveyard to your hand. Since this accounts for all of your creatures, and the bulk of your noncreature support, this is rather strong here. The Gargoyle’s 3 toughness puts him out of range of Shock and makes him a solid body, so you’ll have to be mindful of the natural tension present in such a card. Do you lay him now for the extra body, or later for a chance to recur a better artifact? There’s no right answer here and it varies per game, but generally speaking you’re usually better off resolving a threat rather than hedging against loss.

At the upper end of the mana curve, we find a pair of Cloudheath Drakes, 3/3 flyers with the option for vigilance. Again, nothing tricky here, but a very solid beater which will demaned to be answered by your oppoent. From there we get to the apex of your flight, the Sharding Sphinx. An expensive option, the Sphinx at least benefits from not needing any colour other than Blue to be cast, which can sometimes make him easier to summon than one of your Gargoyles. As an added benefit, the Sphinx spawns 1/1 Thopter tokens whenever one of your creatures deals combat damage to a player. If you’re able to keep the sky lanes clear, this can add up to a very solid mass of extra attackers or chump blockers almost right away. And as we’ll see, they may not stay mere 1/1’s for long.

The remaining five creatures of Esper Artifice all are enablers and buffers for your skywing. A pair of Etherium Sculptors shave a point off the casting cost of nearly everything in your deck, and can help you accelerate into your higher-end beaters. The Esper Battlemage offers a choice of abilities- use White mana to prevent damage to you, or Black to give a creature -1/-1 until end of turn. The Filigree Sages give you the ability to untap an artifact, and while the cost to do so is a bit steep, here again the abundance of artifacts in Esper Artifice gives you a ton of options.

Finally there’s the Master of Etherium, the deck’s foil premium rare, who deeply synergises with the deck. Not only is his power and toughness each equal to the number of artifacts you have in play, but he furthermore grants all of your other artifact creatures a +1/+1 bonus. In a deck as packed with artifacts as this one, he’ll almost always be a considerable bargain if not an outright threat to your opponent, making him one of the deck’s truly must-answer creatures. 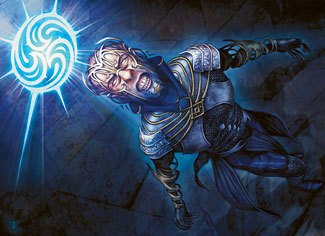 The noncreature options here tend to be something of a mixed bag. You have a passable removal suite in a pair of Oblivion Rings and Executioner’s Capsules, but the wary eye will note that both of these options require mana that is in the minority in the deck. There will be some times when you desperately need to resolve or activate one, and you simply don’t have the right mana. The good news is, the deck includes some card drawing to help even things out. A Courier’s Capsule is very strong, as it enables instant-speed card drawing, but at the expected cost of efficiency. Still, the fact that its ‘effective casting cost’ of four mana is playable in two installments (casting, and activating) gives you some much-needed flexibility. If you add in one more mana and agree to play the sum in one lump, you instead get twice as many cards from a Tidings. Don’t be too fearful of tapping out here- you have no countermagic, and just a handful of activation abilities that cost mana. Your tapping out to Tidings might give your opponent a turn to breathe, but your etherium grip will be right back around their throat with a newly full hand of cards.

There’s a matched pair of artifacts in the Onyx Goblet and Marble Chalice. Negative images of one another in both effect and cost, neither one of them are particularly exciting options and the Chalice easily the worse of the two. It suffers from all the usual problems of lifegain in that it does nothing to advance you towards victory on its own, and will be a dead draw in many games when what you really needed was to either solve or resolve a threat. The Goblet shouldn’t chuckle too loudly at it’s own “good twin’s” dressing-down, for it is only marginally better, but does at least provide you with some reach in the event that the red zone is stalled out.

Finally there’s a spot of mana fixing in the Obelisk of Esper occupying its spot in the intro deck cycle. The set’s other cycles are represented here with two each of the Arcane Sanctum and Esper Panorama to round out the lot.

The strategy, then, is a relatviely stragithforward one- build up your artifact air force, and take to the skies. As your removal is limited and you do have some lifelink creatures here, you may wish to soak up some early damage if it means having a cleaner shot at your opponent later in the game. Unless a grounded creature is a serious threat, it’s generally best to save the removal for things that might impede your air assault. We’ll put this strategy to the test, and report back in two days!