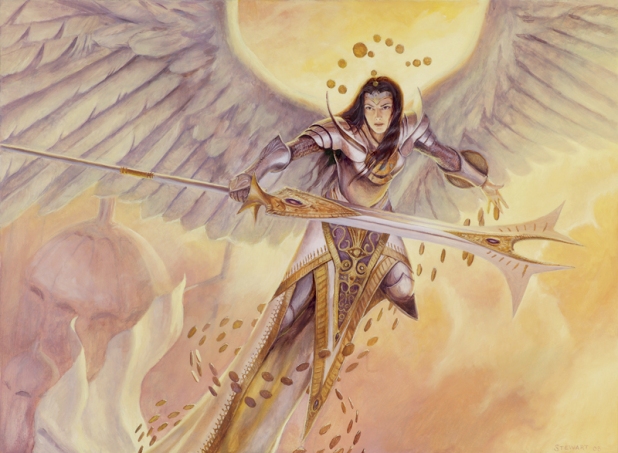 Although in the lore the shards of Bant and Esper weren’t directly inimical to one another, they might as well have been tonight as Jimi and I sat down to do battle with both. Jimi selected the synergistic and artifact-heavy Esper Artifice, and we lined them up for the customary three games. Would exalted have what it takes to take down the etherium-addicts? Here are our notes from the match.

Jimi’s on the play, and she opens up with an Esper Panorama, while I play a Suntail Hawk off of my opening Plains. Lacking a turn 2 play, she opts to sac the Panorama to fetch a Plains of her own, and I swing in for first blood with the Hawk.

Things begin to open up for Esper on turn 3, with an Executioner’s Capsule and Etherium Sculptor hitting the table. I nick in again with the Hawk and follow up with a Wild Griffin. Next turn sees Jimi refill her hand with a Courier’s Capsule, while I bolster my forces with an Akrasan Squire. Swinging in with the Griffin alone, the Squire’s exalted triggers and the Griffin hits for three. Jimi’s now down to 15 life.

Now turn 5, Jimi begins to broaden her board presence with a Windwright Mage after sending the Sculptor into the red zone for 1, then on whim caps the Griffin with the Executioner’s Capsule. Bad timing- next turn after I declare it as an attacker would essentially Fog me, but Jimi doesn’t see it. That leaves me free to send in my Hawk for 2, the Squire’s exalted ability doubling its power. It’s not much, but every bit helps. Thanks to the Etherium Sculptor, Jimi’s turn-6 Sharding Sphinx is just cheap enough to cast after tapping out, but I follow up with an Excommunicate to stall her a bit. Taking advantage of the open red zone, I swing in for 2 more with the Hawk, then play another Wild Griffin. It’s now an 11-19 game in my favour.

Unsurprisingly, the Sharding Sphinx touches down next turn, and Jimi passes. I resolve a Pacifism and put it out of reach, then swing with the Griffin for 3. I follow it up with a Knight of the Skyward Eye, and pass back. Feeling the pressure, Jimi’s next play is an Esper Battlemage and an Oblivion Ring, the latter knocking out my newly-summoned Knight. For my part, I play a Waveskimmer Aven and attack with the Griffin for 4. Jimi pushes the Windwright Mage in front of it, chumping its damage and yielding a 2-point bump from its lifelink. She’s now at 10 life.

It’s now turn 9 and the game shows little sign of ending, and if nothing else it’s a good sign of balance between the two decks. Jimi snipes my Akrasan Squire with her Battlemage’s -1/-1 ability, then drops a Cloudheath Drake for a more offensive threat. I attack with the Aven for 3, then play a Steward of Valeron. Next turn Jimi drops a Tidehollow Strix onto the table followed by an Executioner’s Capsule. I continue the build-up with a Sigiled Paladin, then send in the Wild Griffin on the attack. She blocks it with the Strix, trading them out.

A few extra trinkets for Jimi on turn 11 with a Marble Chalice and another blasted Executioner’s Capsule coming into play, and she uses both right away. She’s now at 8 life, and my last useful aerial attacker- the Waveskimmer Aven- is sent to the graveyard. Frustratingly, my turn 11 is a blank, as I draw a land and pass. Next turn sees Jimi add to her forces with an Etherium Sculptor. She then taps the Chalice for +1 life, kills off my Hawk with her Battlemage as expected, and swings for 3 with the Drake. She activates its vigilance ability, and gains a 1/1 Thopter token from the Pacified Sphinx after dealing combat damage to me. I’m down to 16 life, Jimi at 9. Back to me, I play an Angelic Benediction, then swing for 4 with the Sigiled Paladin, tapping down her Drake with the Benediction. She chumps with the 1/1 token.

A turn-13 Master of Etherium threatens to move us to the endgame, and hitting the board as an 8/8 its not one in my favour. She repeats her Drake trick, and picks up another Thopter token. I spring into action on my turn, though, playing both an Akrasan Squire as well as my Battlegrace Angel. The Paladin gets sent over as a 6/6 with lifelink and first strike, and naturally Jimi chumps it again. Still, the 6 life swing is welcome, putting me back at a comfortable 19.

The game doesn’t resolve itself for another six turns. The Master of Etherium- Jimi’s last real threat- gets solved by a Pacifism, but only towards the end of the game. She’s able to solve my Angel by hitting it with an Executioner’s Capsule salvaged from her graveyard by a Sanctum Gargoyle, and it’s a loss from which I never recover. 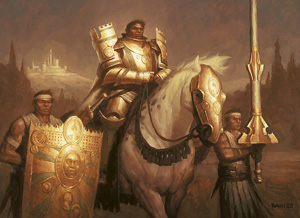 My turn to be on the play, I lead off with a Seaside Citadel, while Jimi matches with an Arcane Sanctum. Our turn 2 goes in similar fashion, with each of us cracking Panoramas. Things truly begin on turn 3, when I land a Wild Griffin, and a turn-4 Angelic Benediction begins the beat patrol early. Her first body doesn’t appear until the turn-4 Filigree Sages.

I swing for 3 more on turn 5, taking her to 14, but have no other play. She resolves a Cloudheath Drake, but the Benediction ensures its little impediment. I come in for 3 more on turn 6, then play a Knight-Captain of Eos before passing. Jimi lands a Tower Gargoyle and passes.

The Gargoyle is little worry- it draws the Pacifism I’ve been saving for just such a special occasion. Another 3 from the Griffin, and Jimi’s at 8 life. For her part, Jimi swings for 3 with the vigilant Drake. Next turn I up the stakes with the Battlegrace Angel, sending in the Griffin for 4. Jimi uses the Filigree Sages to untap the Drake, allowing it to chump. I’m now up to 21 life from the Angel. Jimi looks to stabilise with an Ehterium Sculptor and Sanctum Gargoyle, returning the Drake to her hand.

Now turn 9, I swing for 6 with the Angel, taking me to 27 life. I tap down her Gargoyle on the way in, but she again uses the Sages to untap it and chump. After adding a Rhox War Monk, I pass. Jimi plays Tidings, and it gets her an Executioner’s Capsule, but she can’t trigger it until next turn. She gets the Angel, but can’t stop my attacks, and soon falls. 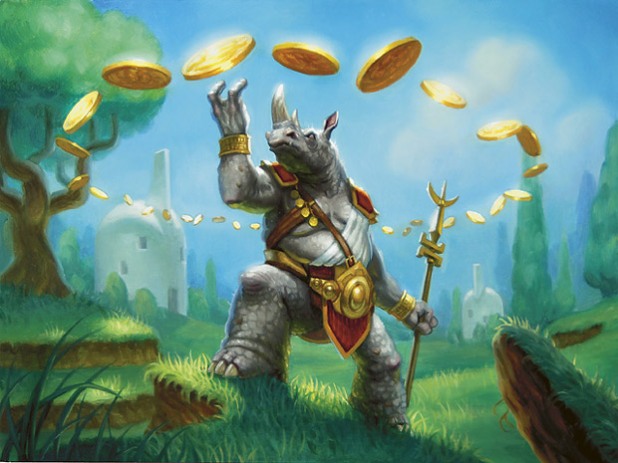 Jimi gets an early, solid start- a turn-2 Etherium Sculptor followed by a turn-3 Tidehollow Strix. My first play is a turn-3 Wild Griffin. A turn-4 Tower Gargoyle and Executioner’s Capsule only make matters worse. I manage to resolve a Pacifism to eliminate the Gargoyle as a threat, but I still don’t have much on the board. After attacking for 2 with the Griffin, I play a Steward of Valeron and pass. I’ve been lucky with the Angel, as she’s in my hand once again, but is out of the question with that nuisance Capsule.

Jimi swings in on turn 5 with the Strix, then follows up with a Cloudheath Drake. I Pacify the Drake, play a Sigiled Paladin then swing for 3 with the Steward. At the end of 5, we’re tied at 15-all.

Jimi’s turn-6 Sharding Sphinx makes me wish I had my Pacifism back. She attacks with the Strix, but I take the trade with my Griffin. Over to me, I play an Angelic Benediction, swinging in for 4 with the Paladin and tapping the Sphinx. The Sphinx doesn’t stay down long, coming back the next round to hit me for 4 and create a 1/1 Thopter token. She follows up with a Tidings to refill her hand and passes. It’s this moment that the game gets away from me.

My turn-8 Knight-Captain of Eos givies me temporary relief against the Sphinx and it’s generation of 1/1 Thopters, but it only lasts two rounds. Over the next few turns, Jimi adds to her forces like a relentless tide: Etherium Sculptor, Sanctum Gargoyle (recovering the Tidehollow Strix I traded a Suntail Hawk for), Filigree Sages, and finally a Master of Etherium. In a retreating action, I’m able to hold out until turn 10, but the Master of Etherium is too much. I die on turn 10. 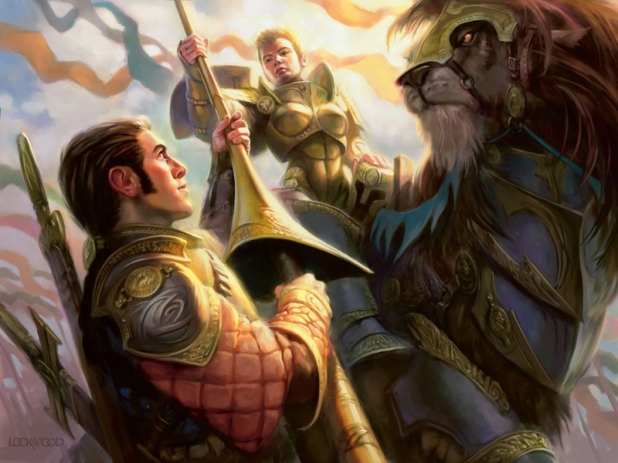 This one was a miss for me. Although I love the thematic feel of exalted, it seemed to have something of an inherent tension in a deck so filled with weenies: namely, I instinctively want to swarm, but the deck is optimised to go in one beater at a time. There are times this works- exalted certainly can inflate your lone champion to ridiculous proportion- but it doesn’t change the fact that you’re still left with a mass of dorks and bears on defense, and that you can easily fall behind on the board when your opponent is landing 3/3 and 4/4 flyers, not even counting the 8/8 Master of Etherium. It also empowers your opponent’s instant-speed removal, making it not only kill one of your creatures but essentially blank your attack for an entire round. Exalted is just not a consistent enough mechanic for the deck, though cards like Angelic Benediction certainly give it some teeth. It also can give your opponent the luxury of time- witness how long these three games went.

That might be somewhat papered over if the deck was capable of removing threats on the far side of the table, but there it simply falls down flat. The two Pacifisms are very solid- not nearly as good as a killspell when you’ve got creatures with obnoxious special abilities like the Sharding Sphinx, but certainly better than the rather temporary Excommunicate. This leaves Bant Exalted very much at the mercy of its matchup.

Perhaps with better constructed support there will be additional spells that give you solid rewards for throttling back on the attack, but this deck just doesn’t have enough such effects to consistently sustain itself. With creatures that can quickly become outclassed, it’s a bit hard to see this strategy as the equal of others. Primordial Jund’s mechanic of devour knew it was giving you a drawback (potential card disadvantage), and was well-built to compensate. Unfortunately, that’s just not the case here. It looks good (in our analysis we said, “With eight cards bearing the exalted keyword, you’ll have little problem solving conflict in Bant’s honourable single-combat style, and quite possibly prevailing”), but doesn’t quite live up to its potential.

Pros: Distinctive keyword ties together mechanics and flavour, always a plus

Cons: Exalted puts the brakes on attacking in a deck that’s essentially White Weenie, and can give too much time to your opponent; weenie creatures outclassed quickly in slower deck strategy; removal suite is poor