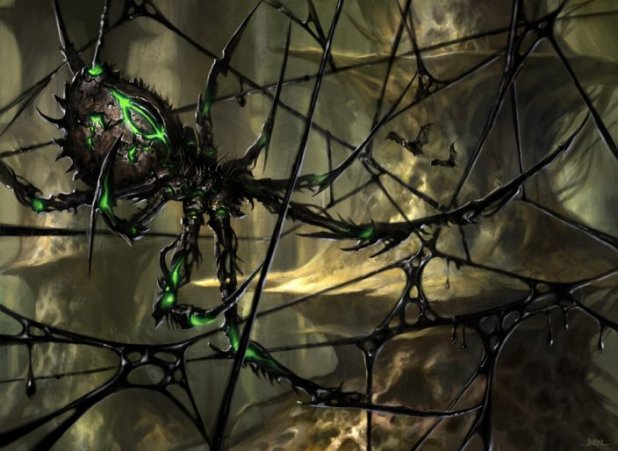 Coming full circle, we sat down tonight to put Path of Blight to the test against the deck that we kicked off the set’s reviews with, Mirromancy. While the end of the cycle, this was also something of a foreshadowing, as the mothership officially announced the decklists of the upcoming Event Decks today, one of which is an infect build. We’d be back with the poison counters before long, but this was a great chance to see how the set’s progressed since Scars of Mirrodin’s Phyrexian Poison’s overcosted weenie swarm.

Jimi opted to squeeze in behind Mirromancy, the spell-heavy Blue-Red Mirran deck, and here are our notes from the three matches.

After early land drops, Jimi lands a turn 2 Iron Myr to get things started properly. On the draw, I have no response other than a Plains and a pass. First blood and the early momentum go to Mirromancy, as Jimi sends in the Myr to chisel me for 1 and follows it up with a Blisterstick Shaman for some early beats. The Shaman’s ping goes to the face as well, and I end the turn at 18. For my part, I once again play a land and pass.

Jimi swings for 3 on turn 4 with both her bodies, but I show the Choking Fumes and clear the board. Not having learned her lesson, she summons a second Blisterstick Shaman, and I’m pinged for 1. Hitting my fourth land drop in four turns, though, allows me to finally deploy some retaliation in the form of a Tine Shrike.

Next turn, Jimi rebuilds her numeric superiority with a Peace Strider, gaining 3 meaningless life after clocking me with the Shaman for 2. Back to me, I send in the Shrike for the first poison counters of the game, then trot out the Tangle Angler, a robust defensive body. Jimi’s having nothing to do with it- she casts Sleep, and taps me down. This lets her swing for 5 on turn 6, and another 5 on turn 7. In between her strikes I do mitigate some of the incoming damage with a Hunters’ Feast, but that still leaves me at 11 by the time I can untap my creatures again. Opting for the conservative play, I send the Shrike in alone, but Jimi bounces both critters back to my hand with a well-timed Quicksilver Geyser. I recast the Angler and pass.

Now turn 8, Jimi leads off with a Preordain, then swings with the team. I block the Strider with the Angler, but still take 2 from the Shaman. She ends with her marquee card, Galvanoth, and passes turn. Looking to stabilise, I replay the Tine Shrike and pass.

The Galvanoth pays for himself the very next turn, giving Jimi a free Turn the Tide. She swings with the team, and I play my second Choking Fumes to lessen the blow. It hardly matters- she shows the Lava Axe and Lightning Bolt to finish me off. 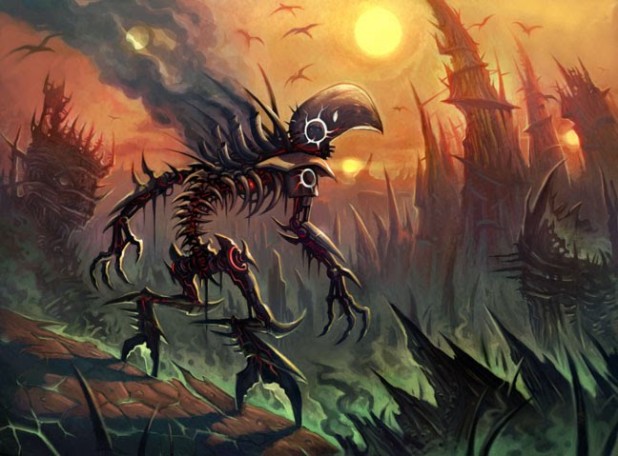 In a perfect repeat of the last game, we drop land until Jimi’s turn 2 Iron Myr, but this time I have a response in the form of a turn 3 Viridian Corrupter. With her Myr sent to the scrapheap, Jimi fishes with a Preordain and passes. Next turn, I send in the Corrupter only to see it lain low with Burn the Impure. Down to 17 life, I play a Tangle Angler and pass. Jimi fishes some more with a Foresee and ends her turn.

Now turn 5, I get a Myr of my own, the Plague Myr, after sending in the Angler to land a poison counter on Jimi. Her turn 5 is a blank, and it looks like I’m gaining momentum. I go in again with the Angler on turn 6 (+1 poison counter), but hold the Myr back to help land a Phyrexian Hydra. Back to Jimi, she whittles the Hydra down to size with a topdecked Lightning Bolt followed by a Blisterstick Shaman. The Shaman’s picked off by the Angler next turn, though, which allows my other bodies to get in for 4 more poison counters (she’s now at 6). Before passing, I drop a Rot Wolf, and it’s back to Jimi. All she can manage is a Melt Terrain on a Plains for spite, then she scoops. 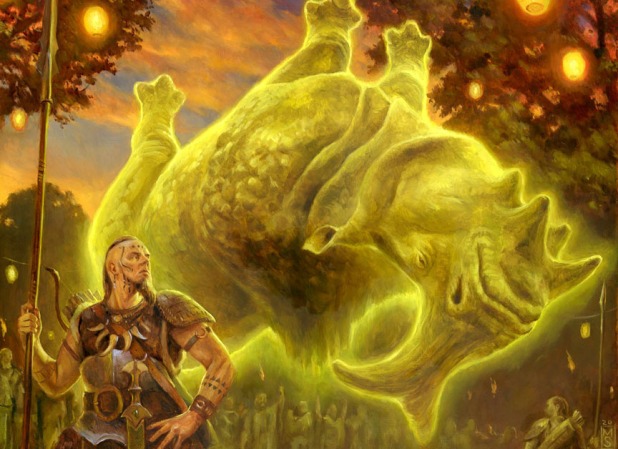 Going for the trifecta we have a leadoff Iron Myr from Jimi on turn 2, which I meet with my Plague Myr. Next turn a real threat lands in the form of a Koth’s Courier, and I’ve lain nothing but Forests. My next turn is a blank, while Jimi follows up the Myr-and-Courier’s attack with a second Courier. Things are not looking good. I play a Tine Shrike and pass.

Now turn 5, Jimi clears my board with an Arc Trail before swinging in with the team for 5. Down to 13, I can do nothing but play a Forest. Jimi sends in both Couriers again next turn, but sadly leaves the Myr behind. I don’t have a choice, though, but to pop Choking Fumes and blunt some of the incoming damage. My turn is once again a blank.

She sends all three in on turn 7, and I show the second Choking Fumes. The Couriers are now derelict husks, and the Myr doesn’t make it through the cloud. Jimi plays another Iron Myr and follows it with a Lumengrid Gargoyle. The end is drawing close. I draw a Pistus Strike, and pass turn, dismayed that I’ve got nothing on the board but land, but relieved all the same at topdecking the removal for the Gargoyle.

Although I manage a Core Prowler, the end comes when Jimi lands a Fire Servant. I take one more from the Myr when I go to block the Servant, and she finishes me off with a Burn the Impure. 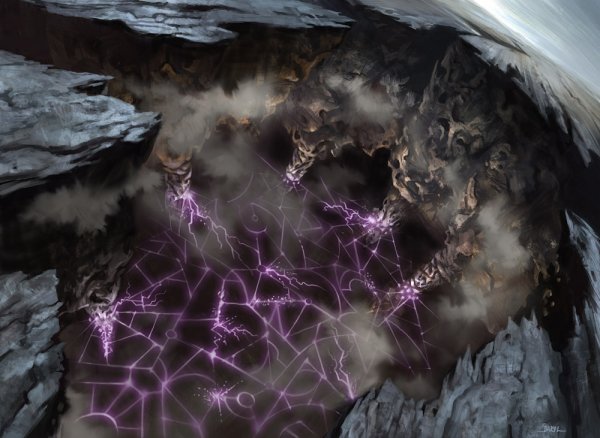 The third game was just bad beats, and I can’t fairly hold it against Path of Blight. Despite being 2/3 creatures, sometimes you just don’t draw what you need. The first two were more representative of what the deck is able to do. And when it works, it does it quite well.

Overall, the deck feels like a modest upgrade in many ways over its predecessor, Phyrexian Poison. Poison’s removal suite was admittedly weak- two Assassinates, with a couple of Slice in Twains in reserve. Although less outright lethal, Blight has a few more options here in its removal package: Banishment Decrees, Choking Fumes, and the Pistus Strike. It also dropped some of the clunky equipment cards in favour of more outright combat tricks, which can be hit or miss. The Mighty Leap is actually decent here, but I found that despite the granting of trample, I really didn’t care for the Unnatural Predations. I would have preferred the versatility of Giant Growth, as it can be used in a pinch to save one of my vectors from Burn the Impure. Of course, facing a deck with less burn I might well have a different opinion.

As you might expect, the deck has its jank- the two Hunters’ Feasts are easy cuts for improvements to the deck, and sadly the deck’s second rare, Decimator Web, is not really at home here. As mentioned in our initial analysis, you need to pay eight mana to get your first poison counter up and that’s just entirely too much to justify the slot.

It certainly does feel like the deck has more to show for its creatures, too. Gone are suboptimal options like Blackcleave Goblin and Contagious Nim, and instead we get some very sexy bodies in Rot Wolf and Blightwidow. Again, there are some easy cuts that can be made here- Phyrexian Digester is vastly inferior to a Cystbearer, so this deck has grounds for improvement. But overall, it effectively conveys what Infect 2.0 should feel like.

Hits: Some clear upgrades in removal and creature package from its predecessor; infect strategy now has the tools to compete in the longer game

Misses: A number of suboptimal card selections for their slots; Decimator Web as one of the deck’s two rares is a real disappointment; mana curve heavilty congested in 3-4 drop slots