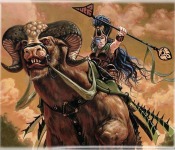 With two great deck experiences behind us, we sat down to begin the second half of playtest games for Planeshift. The set had already produced some pleasant measure of surprise- would the next two decks be of comparable quality? As expressed in the deck analysis of Scout, we had some misgivings with the deck which seemed to have a less-cohesive central theme.

Still, you can’t always tell how a deck will play out without playing it, so with Jimi piloting Domain, I sat down to put it through its paces.

BONUS: Because we forgot to include this in the deck analysis, here is the combined mana curve for the deck:

And now… the matches!

Jimi’s on the play, and leads off with a Forest. I take advantage of a useless first turn to get the Elfhame Palace’s enters-the-battlefield-tapped clause out of the way. Next turn, Jimi plays a Quirion Explorer, while I keep building my mana base with a Fertile Ground for the Palace.

After swinging in for 1, Jimi plays a Kavu Recluse before passing. I next drop a Geothermal Crevice, playing a second Fertile Ground (onto my turn-2 Plains) followed by a Thornscape Familiar. Jimi swings in and connects for 3 next turn, but I get it all back when I lay an Armadillo Cloak onto my Familiar and swing back for 4. It’s now 16-20.

Catastrophe strikes on turn 5, when Jimi sweeps the board with a kicked Breath of Darigaaz, wisely getting rid of the otherwise unanswerable Armadillo Cloak early. Back to square one, I play a Quirion Explorer and a Rith’s Grove.

Jimi hits domain on turn 6, when she plays a Terminal Moraine, then pops it to a Harrow. She’s now firing on all cylinders, and that spells trouble. I swing with my Explorer for 1, then gate it back to my hand in exchange for a Steel Leaf Paladin. Finally, a decent threat!

Not willing to let me untap for any shenanigans, Jimi takes advantage of my tapped board to Tribal Flames the Paladin, then deploys a Kavu Scout. Seven turns in, I have virtually no momentum, no board position, and Jimi’s deck is fully on-line. I trot out the Quirion Explorer, then follow up with a Stone Kavu. Back to Jimi for turn 8, she swings in with the Scout for 5, taking me to 11. Seeing a small window of opportunity with the Stone Kavu, I use a Harrow to turn a Forest into a pair of Mountains, then slam back for 10 (nine of it from the pumped Kavu). Undaunted, Jimi deflects the lion’s share of the damage with a Rith’s Charm, taking just the 1 from the Explorer and leaving her at 10.

The Stone Kavu exits stage right after a backbreaking Exotic Curse, and the Kavu Scout comes right back in for another 5. I push my Explorer into the red zone to nick Jimi for 1, then drop a Nomadic Elf destined for chump-blocker status.

Now on turn 10, Jimi wheels out a closer- Magnigoth Treefolk– putting me on a three-turn clock. I play a Horned Kavu, gating the Explorer back to hand. After recasting the explorer, I pass the turn. Jimi swings in with the Treefolk for 2, leaving me at 4. A five-card Allied Strategies nets her a Tribal Flames, which she sends to the face for the win.

On the play now myself, I lay down an Irrigation Ditch and pass, then it’s back to me after Jimi plays a Forest. I begin the ramping game with a Fertile Ground on my turn-2 Plains. For her part, Jimi only manages a Mountain.

My first creature emerges on turn 3, a Rampant Elephant. Jimi returns with a Harrow, working on her domain situation. She then plays a Quirion Explorer. Next turn, after attacking with my Elephant for 2, I bring out an early Stone Kavu with the help of a timely Rith’s Grove. Jimi does one better with a Stratadon.

Unfortunately for Jimi, Scout loves its Battlemages, and I have a Thornscape in hand with the mana to max it out. It’s damage kicker kills her Explorer, while its artifact kicker Disenchants the Stratadon. I then roll in my critters for 5, leaving her at 13. Dealt a massive setback, she squeezes out a Wayfaring Giant and passes.

On turn 6 I play a Harrow of my own, fetching both Mountains, and swing in for 11 after using the Elephant’s Lure ability to pull the Giant away from my Stone Kavu. The Elephant dies, but its sacrifice was not in vain- Jimi’s now at 4 life. After hitting domain by playing a Swamp, Jimi swings back for 6 with the Giant, counting on an Exotic Disease to pull her out of harm’s way. She follows up the Disease with a Tribal Flames, and it’s a 9-4 game.

Unfortunately, Jimi’s miscalculated, as I’m just able to get across the board for exactly lethal with my pumpable Kavu. A fatal and unfortunate miscalculation. 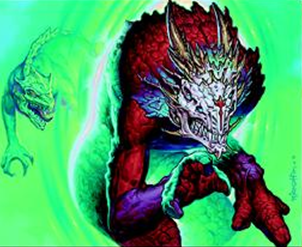 A pair of Forests make up turn 1, then back to Jimi for a Terminal Moraine and a Quirion Explorer. I play a Mountain. Jimi uses turn 3 to mana fix, playing a Plains and using the Moraine to fetch a Mountain. For my part, I’m compelled to play an unkicked Thunderscape Battlemage.  My hand has some rather restrictive options- for instance, I can’t play the Rith’s Grove until I’ve cast a spell, otherwise I’ll be compelled to discard down to 7. I don’t mind ‘wasting’ a Battlemage early, because I have a Horned Kavu in hand and he’ll be coming back before long to be recast later.

The pesky Magnigoth Treefolk touch down on turn 4, then Jimi passes. Springing into action, I lay down the Rith’s Grove to help cast the Horned Kavu (returning the Battlemage) and a Nomadic Elf. Jimi hits domain on turn 5 with a Primal Growth (unkicked), then swings in for 2 with the unblockable Treefolk. Looking to even the odds, I swing back for 5 with the team, then add to it with the Rampant Elephant.

Busted! Jimi lashes out and three-for-ones me with a kicked Breath of Darigaaz, which leaves her Treefolk singed but alive. The Treefolk then attack for 2, and she follows up with a Tribal Flames to the face for 5. By the end of this miserable turn, it’s an 11-7 game. I cast the pricey but reliable Stone Kavu and pass.

Now turn 7, Jimi attacks again with the Treefolk, then gets lethal on the back of an Exotic Disease. Yum!

I was very disappointed with Scout’s performance, particularly against a relatively slow deck like Domain. Both Domain and Comeback were very fun, innovative precons that tread some very underutilised ground. Scout feels like Planeshift’s version of a ‘normal’ deck, one that relies on creatures in the conventional way, with a few bonuses in the form of kickers.

Unfortunately, it doesn’t really seem to come together- Scout seems to have something of a hodge-podge, cobbled-together feel. When it goes off- like it did in Game Two with the Thornscape Battlemage, it works splendidly. But with only six in the deck, and two of them with off-colour abilities which are hit or miss, you’ll not reliably get a lot of mileage out of them. Repeatedly, I would look at a hand of different shenanigans and try and find something that would actually be a threat.

Comeback showed the potential for abusing the gating mechanic with enters-the-battlefield critters. I just didn’t get the sense that a small cadre of Battlemages without that sort of combo support (see: Cavern Harpy) could be as effective, and in that (at least) it didn’t disappoint.

Hits: Multi-tool Battlemage theme a hit when it works; solid colour fixing ensures you’ll generally have what you need

Misses: Deck is too inconsistent; a half-dozen Battlemages does not a ‘theme’ make; a gaggle of head-scratching creature inclusions that seem overreliant on your opponent playing the ‘right’ colours (see: Slingshot Goblin, Amphibious Kavu); singleton “combo” of Amphibious Kavu/Singe too gimmicky; poor burn suite