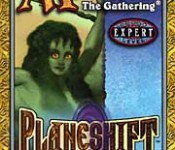 One of the most common design tropes in Magic: the Gathering is what you might call “the fixed versus the variable.” In this dynamic, design space on a card is opened up by presenting multiple versions of the same effect. Generally, there will be one ‘fixed’ effect, then versions of it that are more scale-based, so that under the right circumstances it will be more effective than its ‘fixed’ version, but otherwise somewhat less so. Examples abound, but for ease of reference we’ll use relatively modern ones. Giant Growth is as simple as simple gets, and much like a coelocanth can be called a “living fossil.” It’s simple exhange- +3/+3 at instant speed to a single creature in return for a single Green mana and a card- has remained unchanged since the very dawn of the game some seventeen years ago. Nevertheless, variable versions appear with stalwart regularity. Some recent versions include:

Untamed Might (SOM): This card pins its variation on a very simple scale: how much mana you have available. You’d have to spend four mana to equal a Giant Growth, but the tradeoff is that the only limit on how big your critter can get is your ability to pay.

Might of the Masses (ROE): Unlike Untamed Might, this spell has the same cost as Giant Growth, but its effect is variable based on the number of creatures you have in play. The risk is that you’ll have too few in play when you need it, the reward is when you’ll have many.

Groundswell (WWK): A simple binary operation here. Did you play a land this round? If yes, it’s better than Giant Growth. If no, it’s worse. Note that because of the relative infrequency of playing land on your opponent’s turn, this spell can be a little harder to pull off defensively.

Primal Bellow (ZEN): Although bumped up to uncommon rarity, this spell is still obviously in the Giant Growth family. In this case, the variable is set by the number of Forests you have in play, obviously rewarding a mono-Green deck over any mixed-colour combination.

And now one from today’s deck, Domain:

Gaea’s Might (PLS): Hardly a new phenomenon, Gaea’s Might gives its target +1/+1 for each basic land type you’re playing. Worthless in a mono- to two-colour deck, it achieves parity with Giant Growth in a three-colour deck, and can outshine in four- and five-colour ones.

All of these are, essentially, the same spell: Giant Growth. But let it not be thought that we’re complaining about the lack of creativity amongst Wizards R&D- quite the opposite! Finding those little pockets of open design space that surround most every card is a large part of the fun of the game. It was once overheard, “I hate playing Red, every burn spell is the same!” We could only shake our head with pity- there was a mage who had no appreciation for the vast subtleties of Red!

Planeshift’s Domain is a deck built almost entirely on the variable-value card, and that variable is universally this: how many types of basic land do you have in play? That is the essence of the domain mechanic, which is loaded with creatures and effects that range from overcosted to downright steals, depending on when you cast them.

It’s the Lament convention to break down a deck analysis into two parts- creatures and noncreatures- because most decks tend towards that design. Not to be bound by convention, we’ll be looking at this one a bit differently, seeing what each colour brings to the table. Two things to bear in mind as we begin. First, Domain is a five-colour deck, and second- the only nonbasic lands in the deck are a pair of fixers (Terminal Moraines). That tells you volumes about the deck before we’ve barely scratched the surface.*

Green: The Backbone of the Deck (12 cards)

As it is with most any five-colour deck, every colour provides splashes while Green does most of the heavy lifting (for instance, see the Coalition deck from this year’s Duel Deck release). This is because mana-fixing is part of Green’s purview far more than any other colour. Domain does not disappoint. You have a trio of Harrows and a Primal Growth for raw land fetching, a pair of Quirion Trailblazers for land fetching attached to a body, and finally twin Quirion Explorers for both mana-fixing as well as ramp.

Green also provides a couple of potential beaters in the deck’s two rares, Quirion Dryad and Magnigoth Treefolk. Finally, an odd bit of lifegain (Wandering Stream) and the aforementioned Gaea’s Might round out the colour’s contributions to the cause.

The deck’s main helper colour, this one’s easy. Three Tribal Flames and a Breath of Darigaaz provide some direct damage and burn, and a pair of Kavu Scouts lend some muscle in the red zone (up to a 5/2 for three mana). The Kavu Recluse is a bit of an odd inclusion here- a 2/2 for three mana is typical Red but still a poor deal, but since most of the land in the deck are Forests already, its ability seems a bit of a misfit.

There are only five Blue cards in the deck, but they are very characteristically Blue. Allied Strategies is perhaps the best of the bunch, netting you up to five cards for only five mana. Worldly Counsel also relies on domain to drill down into your library to get you the card you need at any given moment. As with all Domain spells, your results will vary, and that’s the dynamic tension of the deck. Not entirely unlike a catch-22, you need to cast spells to advance your deck, but your spells get better the longer you wait to cast them!

The last Blue option doesn’t care what lands you have in play. Confound is a simple, limited counterspell that cantrips. As a singleton, you can’t rely on it appearing, but its low cost makes it a welcome draw at most any point in the game.

White: An Ounce of Prevention (5 cards)

Three Samite Pilgrims lead off White’s contribution to the deck, and they’re not terrible choices. With fewer than average creatures in Domain, you’ll want to take some pains to preserve them so they can stick around to whittle down your opponant. The Pilgrims can prevent a ton of damage once you’ve established yourself on the board.

Like Red, there are few surprises here as well. Two Exotic Curses act as removal (Invasion didn’t have a lot of tidy, cheap Black kill spells), while the twin Exotic Diseases can pull off a strong Syphon Soul effect.

There’s not a lot of content here, but what you have is quite versatile. Between Treva’s Charm and Rith’s Charm, you have answers to all manner of situations, and the single Ordered Migration– although expensive- can grant you a hand’s worth of fingers in 1/1 flying Birds. Nothing great, but against an opponent with little aerial defense this card may steal the occasional game or two.

The Stratadons are your closers, twin 5/5 Tramplers for five mana (or a little more, depending on your land situation). Not a lot of subtlety here, and even less needed. 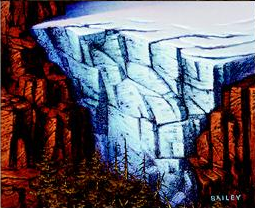 So… a nice beat, but can you dance to it?

The short answer is, it depends. There is so much variance in this deck that it is going to me more heavilty draw-dependant than most, and it’s likely going to need a strong nerve when it comes to mulliganing to stay competitive. Like any other deck that peaks in the mid- to late-game, it is vulnerable to the early rush and gives you only average answers to those problems.

The most important thing you can do when piloting this deck is to stall for time until you have at least three different land types out, and preferably four. In the four to five mark, the deck really comes online, and you’ll be seeing some very strong effects at relatively little expense. Drawing five cards for five mana? Yes please!

You aren’t gifted with a lot of cannon fodder with which to stall out your opponent as you develop, so use your creatures wisely. Although the strategy insert exhorts you to trade life for time, we wouldn’t recommend being too liberal with this strategy as there are only three ways to recover life (Exotice Diseases and a Wandering Stream). It’s not that it’s unsound, it’s just that we’re not as sold on a strat that relies drawing one of only three cards as the author of the insert was. For the record, here is the creature and overall curves for the deck:

Ealry impressions count for much, and halfway through the set we’re quite impressed with the innovations and chances taken by the Planeshift design team. Both Comeback and Domain explore uncommon approaches to the game, in contrast to the modern-day nearly universal “cast critters, back ’em up with spells and beat on your opponent until dead” approach. If for nothing else, these decks are worth a look to see what precons are capable of.

* for those newer to the game, it means you can expect a lot of focus on mana-fixing in the deck itself, usually through Green spells and effects. Knowing that the deck pulls in every colour, the question that must be answered is this: how does it expect you to actually cast all your spells?