Continuing the years-long epic story of the crew of the Weatherlight, 2001’s Planeshift was the second set in the Invasion Block. The Phyrexians had begun their invasion of Dominaria (the plane where much of early Magic’s worlds were set on), overlaying it with the plane of Rath to use as a staging ground. Gerrard and the surviving Weatherlight crew were in the thick of it, trying to battle back this most corrupting of evils, while Urza led a band of planeswalkers to confront Yawgmoth- leader of Phyrexia himself.

Today we wade into the midst of this titanic clash to take a look at the four preconstructed decks from Planeshift, beginning with the Black/Blue/White Comeback. Filled with the sorts of shenanigans and trickeries that are the hallmark of Blue, with some Black and White support thrown in, it is the subtlest of the four. It also requires a certain familiarity with what it’s trying to do in order to maximise its effectiveness- pilot Comeback without an understanding of its intricacies and nuances and you’re liable to fail. Indeed, Comeback doesn’t take sides, drawing resources both from the Phyrexians as well as the Coalition- whatever works to best effect.

The themes and mechanics introduced in Planeshift are all on offer here. In addition to Invasion’s reintroduction of the gold-bordered card (last seen three blocks prior in Stronghold), Kicker was also introduced in the block (a mechanic very familiar to today’s modern player during Zendikar block). Planeshift added to these Gating and Familiars. Gating creatures are critters that are typically undercosted for what you get, but have a drawback of recalling a creature back to your hand when cast (of course like most drawbacks, the right deck can turn it into advantage). Familiars are creatures that reduce the cost of allied-colour spells while they are in play. Let’s look now at the ones included in Comeback. 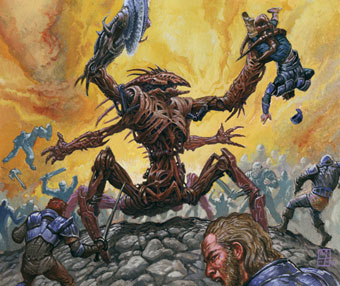 We’ll start with an examination of the deck’s mana curve:

On first blush, the deck appears reasonably-costed, a bit congested in the early game but early options are fine. Of course, that doesn’t fully account for the three creatures with Kicker present- a Stormscape Battlemage may cost only three mana to play, but he’ll be seven mana all told if you want to maximise his utility.

Still, there should be few worries about the mana cost of the cards, and less worry still when you consider that it packs in four Familiars (three Stormscape and a Nightscape) to reduce costs. The greater worry is that this is a three-colour deck, so it’s not amount but rather type of mana that will be most worriesome, but more on this in the next section.

From there, we have an additional utility creature in the versatile Stormscape Apprentice, and a few healthy bodies in singletons Arctic Merfolk, Faerie Squadron, and Galina’s Knight. Now that we’ve taken care of the odds-and-ends, we’ll move to the rest of the creature cards which lay at the heart of the deck’s interactions.

At its core, Comeback is about using gating creatures to bounce critters with enters-the-battlefield (ETB) abilities back to your hand, ready to be recast and reused over and over. Cycle, rinse, repeat. For this to work, you need two things. First, a decent supply of Gating creatures, and second a solid array of ETB-creatures to gate back to hand. Comeback provides plenty of both, and even a few that satisfy both conditions in one!

Gating: Your options for pure gating are a little thin, but of very high quality. You’ve got a pair of Silver Drakes, which not only aid in your strategy but also provide 3/3 flying bodies for only three mana. The stars here, though, are the three Cavern Harpies. Not only do they gate, but they can be recalled to hand for a mere 1 life to be reused for even more gating.

ETB: Pick your poison! Comeback has a wide array of abilities to choose from as circumstances on the battlefield dictate. Need to destroy an opponent’s creature? Call upon the Stormscape Battlemage or two Phyrexian Bloodstocks. Stall your opponent? Let one of the two Hunting Drakes pop a critter back on top of your opponent’s library. You also have options for forced discard (Ravenous Rats), Looting (a Vodalian Merchant), lifegain (the Honorable Scout), and board reset button (Waterspout Elemental, though at considerable cost).

Both: Three cards in the deck pull double-duty, both gating and offering you something when they resolve. Two Marsh Crocodiles act like a backup Ravenous Rats, forcing a discard from both you and your opponent for some hand disruption. A Sawtooth Loon gives you a double-loot option to improve hand quality. Remember, these creatures can actually gate themselves back to your hand if you so choose, so you can reuse them over and over as spell-like effects rather than creatures.

Now, one drawback that becomes apparent upon review of these cards is that some of them are rather colour-dependant. The Broodstock, for instance, only destroys White creatures. The good news here is that the deck is more than capable of dealing just as harshly with non-White players, as a trio of Tidal Visionaries can make any creature be just the colour you need it to be. This is highly versatile, since all of the gating effects require the return of a creature of a specific colour(s), and playing colour-go-round will be where a lot of the intricacies and tightly-managed play of the deck will come to the fore.

Last but not least, there’s a singleton Guard Dogs– a mediocre damage-prevention critter that gains some utility by hanging around with the Visionaries. With all these creatures, however, that leaves little room for noncreature support, but the deck does have a few tricks there as well.

Visions of the Possible

Although bolstered by the ETB-creatures discussed above, the removal suite is a bit scant. There’s single copies each of Slay (which needs to be colour-tricked if you’re not facing Green, but makes up for its narrowness by cantripping), Planeswalker’s Scorn, and the highly versatile Dromar’s Charm. The Charm will frequently be well worth the draw, with the ability to both kill a smaller creature or counter a spell (the lifegain hardly warrants mention, but yeah, it does that too).

There is one additional counter in the deck- Confound– and that’s all you get. Make sure to play them wisely, and you’ll really only want to counter anything that puts a severe dent in your plans.

Finally, two copies of Sisay’s Ingenuity– while subject to the inherent risks associated with auras- greatly help your colour-shifting strategy.

In any such deck, but especially the preconstructed ones, having a stable mana base can be a bit of a trick. The good news here is that Comeback not only includes a Mana Cylix for the token mana-fixing artifact, but goes much further still. Six of the deck’s lands are nonbasic. Ancient Spring, Coastal Tower, Salt Marsh, Terminal Moraine, and a pair of Dromar’s Caverns should go a long way into making the deck viable at speed.

Here’s the final mana curve for the deck:

All in all, Comeback has all the appearance of being one of the most instricately-constructed precons reviewed thus far on Lament. It has a lot of moving pieces that need to come together to work well, but the question as to how effective the deck is at handling itself should things not fall into place can only be answered on the field of battle. We’ll be taking Comeback into the arena against one of its contemporaries. Join us here in two days to see how it did!