Rise of the Eldrazi: Invading Spawn Review (Part 1 of 2) 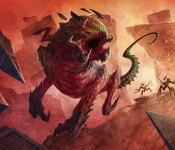 The second deck in our Rise of the Eldrazi preconstructed reviews is Invading Spawn, a Red/Black deck that uses Eldrazi Spawn tokens to power itself up. The designers at Wizards have referred to Rise as “Battlecruiser Magic,” a reference to its Godzilla-like theme of generating mana then spending it on massive creatures to hurl at your opponent. One of the ways this was thematically represented was in the Eldrazi Spawn, 0/1 token creatures that can be sacrificed at any time in return for one colourless mana.

The idea behind this deck, then, is to generate large amounts of mana in part by using Spawn to store up mana, then unleashing it in some way that will prove fatal to your opponent. Typically we tend to review decks starting with the creatures, then assessing noncreature support. With Eldrazi Spawn, however, we’ll be using a more integrated approach due to the design of the deck. First we’ll look at the ways in which Spawn are generated, then we’ll review the options the deck has for using them. Finally, supporting cards which don’t fit into this dynamic will be discussed, as well as the mana curves for the deck itself.

Wherever Something Else Dies

One thing to note is that the creation of Eldrazi Spawn is a sort of ‘rebate’ not entirely unlike the “free” mechanic from Urza Block, where after you cast a spell you were able to untap that many lands. This mechanic prevented you from getting out large effects early, because you still needed to have the initial mana investment, but then it refunded it right back to you (and in some cases, where a particular land produces more than one mana, you’d get more back than you spent on the spell).

This mechanic was largely deemed to be broken, and certainly Wizards had to tread carefully with the generation of the Spawn since they were, in essence, a refund of mana. It should come as little surprise, then, that the Spawn-generating spells and creatures are somewhat on the costly side.

For instance, take Corpsehatch, which is part of the deck’s reasonable removal suite. It has a converted mana cost of five just to do what a Doom Blade does for two, but it refunds you back two of those mana in the form of the two Eldrazi Spawn tokens it creates. In short, a Doom Blade + 2 mana ‘in the bank’ + 1 mana ‘depositor’s fee.’

Next you have the somewhat underwhelming Essence Feed, which provides a life total swing of 6 and three Spawn to boot (making the card’s net cost three mana). The life syphon isn’t bad, though for the money I’ve had preferred a second Corpsehatch.

Lastly, there are three creatures included in the deck that generate the Spawn. Easily the cheapest of these is the Pawn of Ulamog for three mana. The Pawn doesn’t itself generate a Spawn token until it is put in the graveyard, but if any other of your creatures perish while it’s out you’re given the lovely consolation prize of a Spawn.

Easily the most efficient of the cards here is the Emrakul’s Hatcher, which has a net cost of two mana for a 3/3 body. The deck wisely packs in two of them, then throws in a Rapacious One for good measure. The Rapacious One doesn’t bring any Spawn along with it, but unchecked has the ability to generate them at a speedy clip (of course, if you’re getting that many Spawn off of it, your opponent will likely die to combat damage before you find much use for them).

Excepting the Pawn, everything in this class costs ether five or six mana, so you’ll need to have answers to the early and midgame that enable you to survive that long. Once you bring your Spawn engine on-line, however, Invading Spawn gives you all sorts of outlets to make maximum use of them.

There are another eight cards in the deck that directly benefit from having loads of mana laying about in the form of Spawn tokens, so you’ll very seldom have no outlet for your hard-won Spawn. The trick, then, would be to read battlefield conditions and select which cards will best use them relative to your board state, because in all likelihood you’ll have some options here.

One route is to cheat out the Hand of Emrakul. A fairly lacklustre Eldrazi as far as Eldrazi go (it only has Annihilator 1), it’s still a 7/7 body that can be yours for as little as four Spawn tokens. It suffers from the same risk inherent in all eggs-in-one-basket strategies, but can be a real surprise for an unprepared opponent. The lack of Trample, however, in a 7/7 body makes the card less sexy than it might first appear.

The next two candidates also look at the Spawn as creatures rather than mana sources: Magmaw and the Bloodthrone Vampire. The Vampires can convert creatures into damage, and doing so at instant speed means you always have the threat of a combat trick when they go into the red zone. The deck gives you a pair of them. Magmaw is much more expensive, but can convert the Spawn (or any other nonland permanent) into direct damage- a great spot remover or finisher.

Lastly, there are the spells that benefit from having access to the mana stored in the Spawn, such as Fireball, Lavafume Invoker, and the deck’s premium rare, Drana, Kalastria Bloodchief.

Thus, the skeleton of the deck is now revealed: produce quantities of Eldrazi Spawn tokens, then use whatever outlets you have at your disposal to convert them into powerful spells and effects. The weakness in this thinking is as mentioned- that generating the Spawn is expensive, and is typically only becomes viable starting in the midgame. Until then, you’ll need to be able to defend yourself against your opponent, who is certainly not going to want to give you the time you need for an all-in kill.

Scraps of Flesh and Spirit

First, the good news: Invading Spawn doesn’t entirely neglect its removal suite, as preconstructed decks frequently do. Drawing on Red and Black, though, yields some of the best kill in the game. In addition to the aforementioned Corpsehatch and Fireball, you also have a pair of Lightning Bolts and a singleton Vendetta. This is the equivalent of having 7-8 pieces of removal in a 60-card deck, which is considered fairly robust! There’s also an Act of Treason in the deck, which synergises devilishly well with sac outlets like Magmaw and the Bloodthrone Vampire.

Lastly, you have a fairly bland crop of critters to fill in the early-to-midgame for you. Flyers such as the Dragon Whelp, Gloomhunter, and Howling Banshee give you some reach in the air, while the Ogre Sentry and rather poor Lagac Lizard give you some presence on the ground. Given the nature of the deck, cutting the Lizard for a second Sentry would not be a bad move to make- creatures with Defender naturally give you much more bang for the buck defensively, and the deck’s early strategy is to clog up the middle as much as it can to buy time to bring its engine into place. A turn-4 3/3 is going to do this far less effectively than a turn-2 3/3.

Next let’s go ahead and feed the statistics into the mana curve, and see what they reveal about the deck:

As you can see, the deck is somewhat back-heavy, which is somewhat mitigated by its strategy but still capable of producing some horrid opening hands at the same time. That is one of the fundamental weaknesses of expensive decks- they’ll need to mulligan more often on average than more reasonably-curved decks to produce a consistent level of victory. It’s always a bit of a gamble.

In theory the deck has an interesting strategy with synergies galore, but it remains to see how it will hold up in practice. Will there be enough to keep an opponent occupied while the Spawn engine fires up, or are the defences too weak and the strategy too inconsistent to be effective? In our next column, we’ll be taking the deck into the field and finding out firsthand. See you then!