And so the earth cracked and was torn asunder as the forces of Hell boiled up from the abyss to meet the legions of Heaven descending from the sky. Alternately… Sam and I sat down at the table to pit the Divine against the Demonic for a series of three games, to see how each deck would perform. The former may sound more full of Sturm und Drang, but on a lazy Sunday afternoon the latter was just what was called for. Here are our notes from the three games.

With Sam on the play, our first turn sees us do nothing more than lay our respective lands, an action which Sam repeats in her second turn. For my part, I actually manage a play, albeit not much of one (an Angel’s Feather). It would not be until the next turn that things start to move.

Sam’s Overeager Apprentice sets her moving in the right direction, while I drop a beater in the form of the Charging Paladin (+1 life from the Feather). Next turn, Sam mates the Apprentice with a second Apprentice, then Duresses my hand to claim a Serra’s Boon. Back to me, I topdeck a Serra’s Embrace and give my Paladin a hug, sending him into the red zone for 4. It’s now 16-22 favouring me.

Sam draws, but seems to have hit a stall. She passes, and I swing in again with the Paladin taking her to 12, following it up with a Sustainer of the Realm and an Icatian Priest (plus 2 more life). Another blank turn from Sam, and I’m looking to run away with it as I swing hard on turn 6, pumping my Angel twice with the Priest. Sam’s now at 4 life.

I know I’m in trouble when Sam sacrifices her Overeager Apprentice for mana (pitching a spare Swamp from her hand), which she uses to then drop a massive Consume Spirit for 6 on my Paladin. It’s overkill, but a smart play as she heals for 6 as well, putting her to 10.

Not willing to relent, I go in again for my turn 7 play, double-pumping my Angel with the Priest to take Sam down to 6. I pass back to Sam, who again cashes in an Overeager Apprentice (pitching a Breeding Pit), then adds a Dark Ritual on top of it. The benefit of all this largesse is the Reiver Demon who immediately turns the game on its head. Both my critters are off to the graveyard, and I’ve got a whole hand full of nothing.

Now it’s my turn to draw blanks, and it’s back to Sam who swings for 6 and follows up with a Daggerclaw Imp on turn 8. An Angel of Mercy in conjunction with the Feather take me back to 20 life, but I have nothing in the tank for answers. With the tables turned, Sam goes for the throat next turn, coming in for 9. I counterattack for 3, but the writing’s on the wall when on turn 10 Sam plays a Cruel Edict (claiming my Angel) then putting Unholy Strength on the Demon. She swings for lethal, but an Angelsong that’s been gathering dust in my hand is put to good use. Sam passes turn.

Now empty-handed, I topdeck a Serra Angel (+1 life, now at 13). No solution to the Demon it still could buy me some time, but Sam puts paid to that idea on turn 11 with a Corrupt. Swinging for 9 a turn I’m dead in short order. 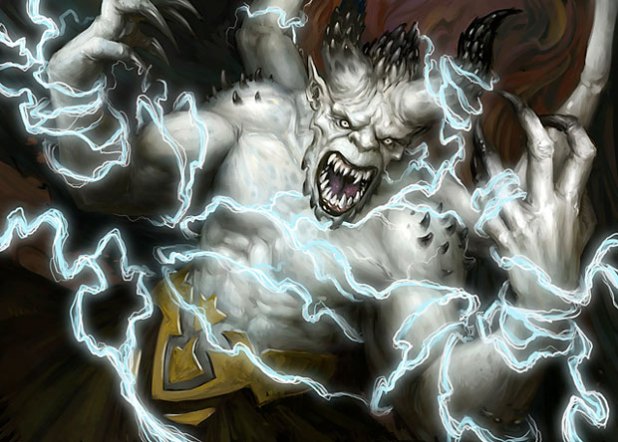 Another uneventful turn one, but on turn 2 I manage an Angelic Page. Sam replies with an Abyssal Gatekeeper, and we spend turn 3 trading nicks from our critters. I add an Angelic Protector, while Sam manages a turn 4 Cackling Imp. Next turn, I enchant my Protector with Serra’s Boon, swinging in for 4 (using the Page as a buff). Sam plays the mimic, putting Unholy Strength on her Cackling Imp and coming in for 5 with the Gatekeeper in tow. We’re now at 14-all.

Turn 6, I Pacify the Imp, swinging in again for 4. Sam can only nudge back with the Gatekeeper before passing. Feeling momentum on my side, I press the attack, but Sam has a Dark Banishing which kills the Protector. I cast a Charging Paladin to replace her and pass, and Sam uses the Cackling Imp to ping me for one. She had forgotten to do so last turn, but would not forget for the remainder of the game. Over to Sam, her turn is a blank and she passes.

Playing a Secluded Steppe, I cast nothing but still attack for 3 (the Paladin + the bump from the Page), taking Sam to 7. A turn-8 Corrupt, though, swings the game hard astern as Sam- who hasn’t missed a land drop- points it directly at me. I’m now clinging to life at 2, while Sam flush from her syphon sits contentedly at 15. With her Imp pinging me every turn, I’m on a very short clock indeed.

An Angel of Mercy’s 3-point life bump helps (I’m at 4 after her ping), then Sam casts Promise of Power (paying the Entwine). This takes her to 7 life, but refills her hand and gives her a 6/6 Demon token to boot. I’m actually grateful for the token, as it gives me a solid target to assign a Faith’s Fetters on, bumping my life total by 4. I attack with my Charging Paladin and Angel of Mercy, looking to strike a mortal blow. Sam chumps the Paladin with her Abyssal Gatekeeper, causing us each to lose an additional creature (Sam pitches her Demon token, while I bid adieu to the Angelic Page). The Angel of Mercy (buffed by the exiting Page) still gets in for 4, and Sam’s at 3 life.

Still, with a hand freshly refilled she’s sure to have some options as she untaps. First she lays out a Demon’s Horn, then puts it to good use with a Soot Imp, Demon’s Jester and Duress flying from her hand. The Duress is a whiff (I have three more Angels in hand, nothing more), but she still reaps three life off the transaction.

Keeping pressure on, I attack again on turn 11 with the Paladin and Angel tandem, and Sam chumps with both Imps to but her some time. I drop a Serra Angel and Icatian Priest, then pass at 6 life after Sam’s Imp pings me. Sam’s out of gas- a Cruel Edict is as much for consolation as anything as I offer up my Priest, and Sam scoops. 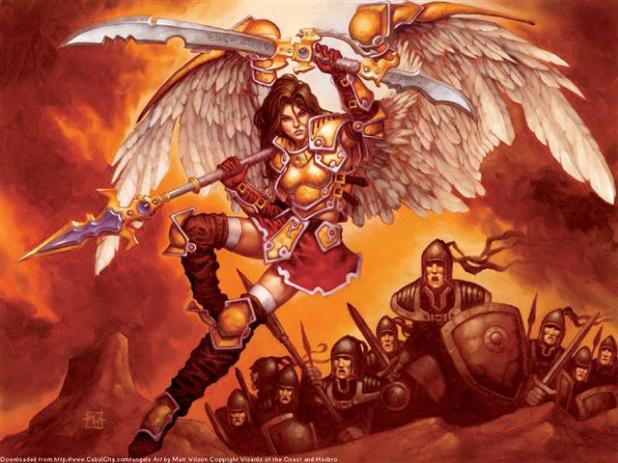 Drawing my opening grip, I’m presented with something of a dilemma. I have five Plains staring back at me, but Akroma, Angel of Wrath is as well (plus a Serra Advocate). The idea of a turn 8 Akroma stitching up the game is a powerful one, and in that context five land is a nice head start. All I have to do is stall and delay until then.

And stall I do. My first play is a turn 4 Sustainer of the Realm I’ve drawn into. Meanwhile, Sam has played a turn-2 Demon’s Horn, along with a Dusk Imp and Stinkweed Imp. By the time her turn 5 Overeager Apprentice sees play, she’s at 22 life with me at 18 and unsurprisingly little to show. The Serra Advocate comes into play on turn 5, and I decide to hold my forces back to defend.

My plans take a turn for the worse on turn 6. Sam sacs the Apprentice (pitching a Breeding Pit) and out steps Kuro, Pitlord (+1 life for Sam to boot). I get a little help in the form of a Marble Diamond, and a timely Pacifism takes care of Kuro, but ahead on life Sam trades 5 of it to kill both my critters. She’s now at 19, still one ahead.

On the upside, we’re now entering turn 7 and I’m in fairly solid shape, though the lack of any weenies to act as Akroma insurance is a little uncomfortable. Still, no guts no glory and after Sam swings in for 3, I untap and cast Akroma, who immediately swings back for 6. At 13 life, Sam’s got at most three turns to live.

Her turn 8 is a blank, and another lucky break comes my way in the form of an Angel of Mercy. The 3 life is nice (putting me to 21), but the extra body is reassuring. Passing to Sam, she lets Kuro die by not paying his upkeep, then with her mana freed up drops Barter in Blood. She loses both her Imps, but I choke back a tear as I lose both Akroma and the other Angel. Time for plan B.

Drawing a Secluded Steppe, I cycle it and groan inside as I draw another Plains. By now, Sam and I are both largely playing off of the top of our decks:

Turn 10: Sam blanks, I drop an Angel of Mercy

Turn 11: Sam blanks, I swing in with the Angel taking Sam to 5

Turn 12: Sam Dark Rituals up a 9-point Consume Spirit on the Angel, putting her at a despiriting 16 life (including the Horn bonus)

Turn 13: Sam draws and plays a Demon’s Jester, who is delighted to see that Sam has no cards in hand. I blank.

Turn 14: Sam swings for 4. I topdeck a Serra Angel and cast her.

Turn 15: Sam swings for 4. I block with the Serra and use Healing Salve to keep her alive while killing the Jester. At this point, I’m starting to think I may have the game under control again.

Turn 16: Sam plays a Foul Imp, whose 2-point life cost is partially offset by the one she gains back from the Horn. I draw a Secluded Steppe, and cycle it into a Plains for the second time. I curse inwardly, but Serra hitting Sam for 4 mollifies me somewhat. Sam’s down to 7.

Turn 17: Sam gambles hard on a Lord of the Pit. With only one critter in play to feed it and at now 8 life, she would not be the first Black mage slain by their own creations. I look down at my hand- 3 Plains- and cross my fingers

Turn 18: Sam sacs the Foul Imp to the Lord of the Pit, and comes in for 7. I’m now at 10 life. Sam follows that up with Promise of Power, paying its Entwine cost. The 5 life hurts (she’s now at 4 after the Horn), but it nets her five cards and a Demon token to satisfy her Lord of the Pit next upkeep. I draw a fourth Plains.

Turn 19: Sam gets there with a Corrupt to the face.

I personally found playing Divine neither especially fun nor rewarding, but it must be said I’m about as averse to White as I am to Green. If these three games are any indication, I can take little away from the design of the deck, which held its own relatively well against Demonic. The swinginess of the games was not at all unexpected given the construction and relative lack of removal. It did eventually feel like a “race for the bombs,” and while Divine should have had some edge in that (more bombs), the mana ramp of Black easily carried the day here.

Removal aside, it was somewhat unfulfilling to keep paying ever-increasing mana costs and still getting little more than a bear with wings and a fancy ability. Indeed, another way to look at this deck is “Bears n’ Bombs,” and despite the variety of faces in the pack, it started to feel a little monotonous by the third game.

I again have to give credit to the designers for balance between the decks (though I reserve final judgment until after I pilot Demonic), and there will be many players who will enjoy the play experience of the “Bears n’ Bombs” approach. Had the noncreature spells offered a little more consistency, I might have rated the deck higher as I could at least depend on some answers to the deck’s problems, but card choices like Angelsong and Healing Salve were hardly encouraging.