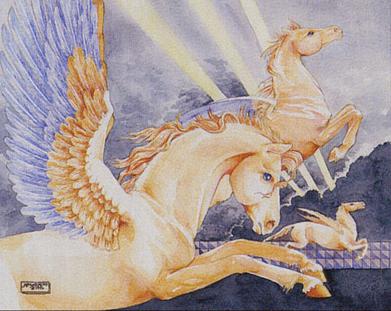 Sad to say, Anthologies had already obtained for itself quite the reputation around the house for its- diplomatically-speaking- less than extraordinary gameplay. Still, looking to keep an open mind I was able to convince Jimi to sit down behind the Red/Black deck and play a few games with the decks. Here are our notes from the matches.

On the play, Jimi starts off with a Mountain and Goblin Vandal, while I match pace with a Plains and Infantry Veteran. Jimi then swings in for 1, then following up with another Goblin- this time the Digging Team. A nice early drop follows for me, though, as I skip an attack and play a Freewind Falcon. An early prot-creature could be huge, but I’m more interested in an untouchable air presence.

Jimi begins turn 3 playing Goblin Warrens, then passes. I swing with the Falcon, using the Knight to pump it up, which I’ll continue to do almost all game. Jimi returns fire the next turn, casting Unholy Strength on her Vandal and sending it into the red zone. But as luck has it, I’m holding one of the best cards in the deck- the Benalish Knight– and I kill off her enchanted Vandal. I then retaliate for 4 with the Knight and pumped Falcon. It’s a 14-18 game, and I follow up with an Order of the White Shield.

Turn 5 arrives, and Jimi has a solid threat in the form of a Hypnotic Specter. With me wide open, she swings in for 1 with the Digging Team, then passes. I go all-in again, holding off on activating the Infantry Veteran until she’s declared no blockers, and Jimi’s down to 8 life. With the bird having served its noble purpose, I tap out for a 3-point Hurricane to blast the Specter from the sky. The score is now 5-14 with the Hurricane damage factored in.

Jimi’s back is broken and she knows it. She gamely manages a Goblin Recruiter on turn 6, and begins tutoring her deck for Goblins. While she’s searching, I look down at the three cards in my hand (Pegasus Stampede, Sacred Mesa and Armored Pegasus) and forlornly wonder whether I’m actually playing Magic or Bella Sara. Finally she’s finished, and we press on.

For me, with little else to do I play Pegasus Stampede, buy it back, and play it again, netting me a pair of 1/1 Flyers. It’s a bit prophetic as Jimi manages to clog up the ground next turn with a Goblin Mutant, and my Pegasi swoop in for the win.

A slow start for Jimi this time, as she doesn’t manage a non-Land play until turn 3’s Goblin Matron. Meanwhile, I’ve again deployed an early Infantry Veteran, and added a Samite Healer on turn 2. By turn 3 I’m using Sammy in the red zone with the Veteran’s buff, and going to work on Jimi’s life total. I add a Pegasus Charger to my army and pass.

Jimi appears to stabilise on turn 4 with the Mogg Flunkies, but not missing a land drop I cast the Serrated Arrows and kill her Matron, removing the Flunkies from defensive consideration. She’s already at 13 life, I’m still at 20.

Jimi then deploys the Goblin King, then passes. I attack with the Pegasus for 3, buffing it with the Veteran.

Turn 6, and Jimi’s looking for answers. She plays an Uthden Troll, then swings in with the King and the Flunkies. My Healer prevents 1, putting me to 16 life. After untapping, I go all in with everything- the Vet, the Healer, and the Pegasus. Jimi opts to block the Veteran with her Troll, the only untapped critter she has. I use the Serrated Arrows to give the Troll a -1/-1 counter, then cast Warrior’s Honor for extra damage and to keep the Vet alive. The score now lies at 5-16, and I play a Scavenger Folk for a defensive chump before passing.

A good thing, too, because Jimi’s on a roll. After swinging in for 6 (which I opt to take, putting me at 10) she plays Lady Orca, one of those dreadfully overcosted (by today’s standards especially) legends from, well, Legends.

Knowing I can race to victory, I go ahead and cast Armageddon on turn 7, swinging in for 3 more. Jimi’s run out of real estate (rather literally), and scoops.

This time, the shoes are on the other feet as Jimi comes out of the gate quickly while I need time to develop. She gets out an early Goblin Balloon Brigade and Goblin Hero, going to work on my life total immediately. My first play comes on turn 4, when I use the Benalish Knight to again act as removal, taking down the Hero in the red zone. Jimi ends her turn with a Goblin Matron, fetching a Goblin Tinkerer.

A timely play for her, too, as I look down at the Serrated Arrows in my hand. I go into the tank for a moment, then opt to play it anyway. Next turn Jimi comes in with her Goblins, and I snipe the Balloon Brigade with my Arrows. As expected, she then deploys the Tinkerer.

For my turn 5 play, I use the doomed Arrows to kill the Goblin Matron, then swing in for 2 with the Benalish Knight. We’re now even at 16 life apiece, and I play a White Knight before passing.

My Arrows die on turn 6 to her Tinkerer (which also dies), but they have done rather well for themselves and I don’t mind the loss of them (essentially, they were a three-for-one play). Jimi follows up with the Mogg Flunkies before passing.

On turn 6 I make a bit of a gamble, and Pacify the Flunkies. With no other Creatures in play, Jimi’s Flunkies can’t block anyway, but I’ve got some plans for the turns ahead that’s going to require a lot of mana, and I don’t want to take the chance that she’ll get some weenie critter out and enable blocking from the 3/3 Flunkies. I go in with both Knights, and Jimi’s down to 12 life.

Things turn on turn 7, though, when Jimi gets her critical sixth Land drop, allowing her to Fireball both my Knights. Once my turn arrives, I lay down Sacred Mesa and make a Pegasus token to make sure it sticks, then pass.

Continuing her momentum, Jimi lays another Land and casts Lady Orca. This makes me sit up and take notice, and am thankful for the Sacred Mesa and its promise of a stream of chump blockers. My turn arrives, I sac the Pegasus during my upkeep to keep the Mesa in play, then lay down a topdecked Carnivorous Plant. This is a dreadful card, but at least it is something of a deterrence against her Lady Orca. I follow up with another Pegasus.

Passing to Jimi, she plays a Nevinyrral’s Disk, then passes. I Disenchant the Disk, then create two Pegasus tokens (since I’m losing one per turn, I’m needing to get ahead in Pegasus tokens). A good thing, too, as Jimi Terrors the Plant and charges in with Lady Orca. I chump with a Pegasus, leaving one to pay the upkeep of the Mesa. Jimi ends with a Goblin Snowman, which she proclaims to be one of the worst Goblins she’s ever played (Goblins are her affinity tribe).

Into turn 10, I play a Llanowar Elves and make three Pegasi this time. When Lady Orca again knocks at the door, I let the Llanowar Elves answer it, and so start to get ahead in the Pegasus count. I’ve drawn into an Overrun, and just need to get enough Pegasi to close the game out for me.

On turn 11 I play a fourth source of White mana, a Brushland, and create four more Pegasus tokens, taking the total up to 6 in play. Lady Orca kills one on Jimi’s next attack, and I lose a second to paying the upkeep, but four are enough. I cast Overrun, and take the game.

I can simply say, without hyberbole, that I cannot recollect a time when I have had less fun playing Magic. It’s no surprise that I have a bit of the collector in me, and on the surface of it scoring this piece of Magic’s history was as exciting as finding a copy of Deckmasters: Garfield vs Finkel.

Anthologies was released to commemorate the first five years of the game, and each deck was required to have cards from each set from that period. Not only should this have made a couple of very fun, interesting decks, but since I was an active player during that time I was expecting to find a ton of added nostalgic value. This set was the very gravest of disappointments.

That’s not to say it was a total waste- we’re still happy to own it, and the booklet that comes with the box is a great read featuring highlights of each set. But from the outset, it became apparent that these decks were constructed with a very rudimentary sense of balance which makes them almost unplayable (but hey, if they’re both unplayable… balance, right?).

I take nothing away from the designers- consistent balance is a very hard thing to obtain, and with precons they seem to get it right most of the time. But there seems to have been a rigid formula to explain some of the ridiculous design elements of the deck, elements present in more or less equal measure in both.

Buy it if you must, play it if you like, but the best part of this deck is its historical context. Consider yourself warned.

Misses: Most everything else. We don’t like to be snarky, but put plainly the deck is very poor. It has no coherent strategy, and more negative synergy than positive.