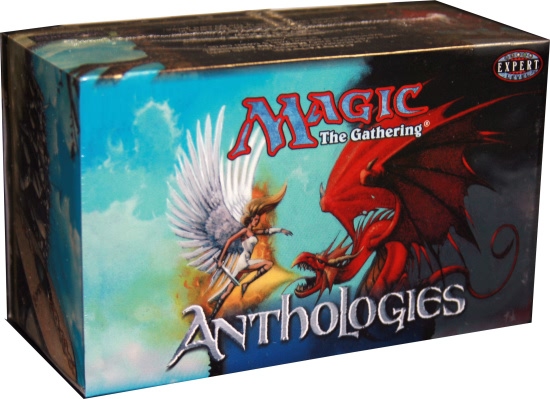 Once again we return to the set Wizards released to commemorate the 5-year anniversary of the game we all love, Magic: the Gathering. In our review of the Green/White offering, we found a core of strong cards at the heart of an excess of fluff and inefficiency, but overall a deck that seemed to lack overall direction. Today we turn our attention to that other deck in the Anthologies set: the Black/Red one.

Battle is its Own Purpose

Like its Green/White nemesis, the Black/Red builds its foundations off of a Tribal theme, but in this case it seems to be a bit more cohesive than the Knights. Of course, when you’re building around Goblins, cohesion isn’t difficult to attain.

The deck similarly features a front-loaded approach with its mana curve:

Unsurprisingly, all of the one-drops are Goblins, ranging from useful to very narrow. The Goblin Balloon Brigade, reprinted in M11, gives some unusually cheap air presence for Red, while the Mogg Fanatic (recently rated the 4th best one-drop in the game of all time by Star City Games’ Ben Bleiweiss)- although under the current rules not nearely as useful as he once was with damage put on the stack- still gives some versatility with its ability to snipe a Weenie or wounded critter. The Mogg Raider’s sacrifice ability can be used to get in the last bit of damage needed to finish off a wounded opponent (going ‘all-in’ being one of Red and Black’s specialties), while the Raging Goblin is a solid turn-1 play that gets significantly weaker with each passing turn. Note that the Mogg Raider was misprint with a casting cost of

Moving on to the half-dozen two-drops, we horrifyingly find another card optimised for Artifact removal, the Goblin Tinkerer. Admittedly Green/White’s Serrated Arrows can be a true nuisance against the deck, but the long-term win percentage of this deck would be far better served by the presence of a real threat rather than a conditional to deal with an occasional one. Fortunately, the selections improve from there.

The Goblin Recruiter, unlike most cheap Weenies, is a weclome draw at most any point in the game given its tutoring ability, though in most cases you’ll want to be sure to fetch the Goblin King assuming you’ve not drawn into him previously.

A quick aside about the Goblin King is important here. As printed in Anthologies, the subtype of the Goblin King is ‘Lord,’ and a seemingly ineligible fetch with the Recruiter. Many of you may not realise, but our friend the Goblin King has had a long and storied journey of self-identity. In the early days (Alpha-Unlimited), he was what he was. His subline read ‘Summon Goblin King.’ Simple, descriptive… and yet, somehow dissatisfying to one possessed of greater ambitions. When Revised hit, though, he’d struck out in a different direction, foresaking his heritage in an attempt to fit in. His line now read ‘Summon Lord,’ and he meant it.

From his angry youth to a very fat and lazy adulthood, he continued to put on airs of being a ‘Lord’ and avoiding excessive association with his roots. With age, though, wisdom and even perhaps some humility arrived, and our friend began to look back wistfully at remembrances of a youth spent freely in the caves and warrens. At long last, by 9th Edition, he made peace with himself and his past and was now content to be known as a “Creature – Goblin Lord.”

The story doesn’t quite end there, for as his hair greyed and teeth yellowed, after a long and fulfilling life at the apex of countless tribes of Goblins, he was at last known in the very twilight of his life… his final printing to date (Tenth Edition)… as a simply, humble “Creature – Goblin.”

Such is the curious circle we traverse over the path of years, finding our destination not really all that different from our beginning.

But back to the wider point, per Gatherer he’s officially a Goblin, and therefore legal for the Recruiter to ‘recruit.’

Mogg Flunkies mirror the Spectral Bears– a 3/3 for two mana whose drawback is fairly negligent in the pairing of the two decks. The Black Knight and Knight of Stromgald similarly mirror cards from the Green/White deck and offer Protection from White with First Strike, and the Cuombajj Witches stitch a very conditional ability onto a sturdy enough blocker.

From there we move to the three-drops, where the best of the bunch is that old scarecrow, the Hypnotic Specter. Without a Dark Ritual to power him out on turn 1, though, the “Hippie” has lost a lot of his intimidation, but he remains a very solid card for card advantage if you’re able to clear a lane through the skies. There’s also the Goblin Hero (dreadful), Goblin Matron (see: Goblin Recruiter), Goblin King (solid for the Tribal buff), and Aesthir Glider for another body in the air, albeit a relatively feeble one. Lastly, harkening back to the days when Red had a solid Regeneration option there’s the Uthden Troll, who isn’t a bad deal (but not great).

For the most part, there’s the deck’s creatures. Black/Red frontloads a lot of its activity, so expect to cast up a storm early on and then be living draw-to-draw. There’s only two cards at the four-drop slot, both of them inferior: the defensive-minded Goblin Snowman, and the conditional Goblin Mutant. Beyond that we have a very solid body in the Volcanic Dragon, an extortionately-priced Lady Orca, and the comparative bargain Ihsan’s Shade.

Fortunately, the noncreature spell selections pull the average of the deck up a little. 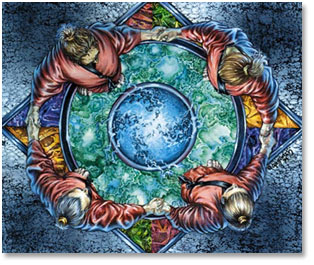 As one might expect from a Black and Red deck, there is a fair amount of burn and removal present. The staples Lightning Bolt and Fireball make an appearance, as does Terror. From later sets we see Goblin Grenade, Pyrotechnics, and Pyrokinesis (which almost makes you wish the deck was Blue so that the slot would instead contain that colour’s card from the cycle: Force of Will).

Another all-star performer included in the deck is one of the premier discard spells of all time: Hymn to Tourach. There’s also Goblin proliferations spells, Goblin Offensive (with flavour text right out of The Wizard of Id) and Goblin Warrens, included no doubt to mirror the two Pegasus generators in the Green/White deck.

Lastly, we have a pair of poor Auras (Unholy Strength and Feast of the Unicorn), and this deck’s one blow-up-the-board card, Nevinyrral’s Disk. Taken together, the combined curve is as follows:

In the Land department, the deck packs in another set of the Urza’s Saga Cycling lands (Polluted Mire and Smoldering Crater), as well as one copy of the infamous Strip Mine from Antiquities.

Overall, the deck seems to more closely follow a Weenie-based early-game strategy, where the Green/White deck tends to take over in the mid-game as its First Strikers come on-line and it hits the sweet spots in its curve. With a heavy spread in the one-to-three drops, Black/Red should have little difficulty establishing early momentum. It will only consistently win when it can maintain it.

Our hopes are no higher for this deck than for the other Anthologies deck, but at this point there will be a certain perverse joy to be found in taking these two into battle. Join us in two days’ time, when we pit them against one another to see which comes out on top!