I have to admit before writing these reviews, when I’d played the Jace/Chandra decks (usually against other Planeswalker-based Duel Decks) I’d tended to favour Chandra’s construction. Although in my heart I’m a Blue mage, it took deconstructing Jace’s composition to really get a sense of appreciation for its intricacy. Indeed, I suspect I began to second-guess Chandra’s, and so it was with a keen enthusiasm that I threw down the gauntlet to Sam, and squared off to see if a Red blitz could power through her early stalling. Here’s how it unfolded:

Sam’s on the play, laying down an Island and passing. I drop a Mountain, and turn it sideways for an early threat: the Flamekin Brawler. A perfect early card to get the beats in, I’m dismayed the next round when she plays a Wall of Deceit. I make my land drop, and add a Pyre Charger to my budding Red army.

Jace comes through for Sam again, with a turn 3 Spire Golem, and my offense remains stalled. My response- a Fireslinger– does little to help my board position.

Sam gets in first blood, sending the Golem over before playing a Morph to start turn 4. It’s just the opening I need, sending in both my Elemental Warriors. Sam blocks the Charger with the Wall, I pump it once and an Incinerate finishes it off. One roadblock down, one to go, and I pass turn to Sam.

Sam deploys a second Morphed critter, then passes back. Land’s been fickle for me, having missed two drops already, but I seem to have just enough to squeak by. The Charger heads for the red zone again, gets pumped thrice, and Sam’s at 16 life.

Sam goes back on the offensive on turn 6, deploying her Golem in to chunk me for another 2. She then puts a Riftwing Cloudskate on Suspend. I play another Mountain- my fourth- and send in both the Charger and the Brawler. I’d held one back in case she opted to trade Morphs for both my fragile Warriors, her refusal to do so gives me some reading of her disposition (and cause to risk sending in both). Sam declines to block a second time, and pays 5 life for it. She’s down to 11.

Turn 7 sees Sam play an Island and pass- not an uncommon occurrence with Jace’s deck. I go all in again with the Elementals, and this time Sam takes a trade, un-Morphing her Fathom Seer for the cards first, then blocking the Charger. Sam takes three more damage.

Again a draw-go for Sam the turn following, and I ping her at the end of it. I’d held off using the Fireslinger because of the self-burn, but now that she’s below 10 it’s time to move in for the kill. I do nothing but attack, and Sam trades out the Golem for the Brawler. I pass, and on her upkeep the Riftwing Cloudskate pops, Unsummoning my pinger. She rounds out her turn by playing another Morphed critter.

With my creatures depleted, I’d be in a bind but providence has seen me supplied with that other specialty of the Red mage. I use my turn to Incinerate and Magma Jet her, five damage bringing her to 2. She plays nothing on turn 10, I cast a Firebolt to draw out the counter, then a Fireball to seal the deal. 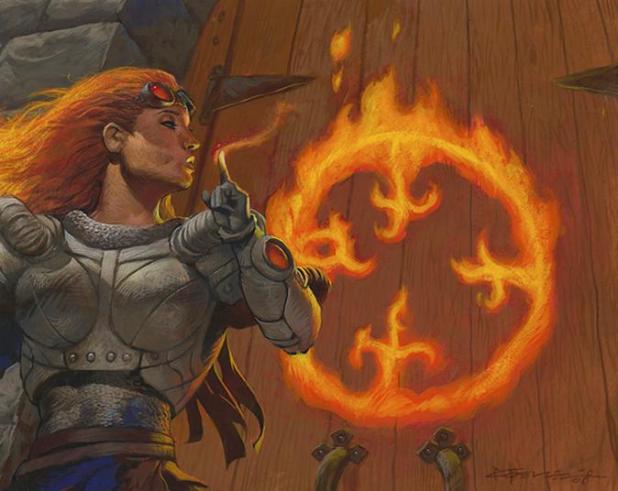 Coincidence or synchronicity? Sam and I both begin our second game with the singleton specialty lands in each deck. Her Terrain Generator starts us off, and I match it with my Keldon Megalith. Once more she gets an early Wall of Deceit out, and my early attack (a Slith Firewalker) is stymied. This is exactly the kind of start Jace’s deck wants to make.

Turn 3, Sam plays a second Island, then taps out to use the Generator to play a third Island. I play a Mountain and pass- not looking good. Sam then trots out a Martyr of Frost, and meets my replying Rakdos Pit Dragon with an end-of-turn Fact or Fiction. One of the more fun spells of the game, she reveals: Brine Elemental, Island, Island, Gush, and Aethersnipe.

The Elemental and the ‘Snipe are both expensive critters she’s getting close to being able to cast. I know as well that she values card draw, and the two Islands are a bit of an x-factor.  Not knowing her hand it’s hard to say how she’ll value them. I decide that I can’t abide giving her the opportunity to get both critters, so its one in each pile. Of the three remaining, I’ll pair the lands and put the Gush in the other, but again I have to think how to pair them. I suspect she’ll want the Gush more than the Islands, and consider the Brine Elemental the weaker of the two beasties. Sure it has a nasty un-Morph effect, but it’s rather pricey. So I pair the Gush with ol’ Briny, stack the other three and push the piles back to Sam. Sam deliberates for just a moment, then goes for the Gush pile.

Turn 5 arrives, and I still have yet to mount any kind of attack. Sam Suspends an Errant Ephemeron, then plays a Morph. Hitting my fifth land drop right on course, though, I break her back with a Cone of Flame: 3 to her, 2 to the Morph and 1 to the Martyr of Frost. Tapped out, she’s helpless to stop it (no Daze in hand), and drops to 17 life. The Rakdos Pit Dragon chews off another three after she opts to block the Firewalker with the Wall.

Digging for answers, Sam plays a Mulldrifter on turn 6 and passes. I Firebolt the fish and swing in with both beaters. With that much untapped land in front of me, Sam throws the Wall in front of the Dragon (which eats it), and takes 1 from the Firewalker (which gets a counter added to it). I follow up the attack with a Soulbright Flamekin.

Sam’s feeling the pressure. She Suspends a Riftwing Cloudskate, then plays a Man-o’-War to bounce the Dragon back to my hand. Passing back to me, I re-cast the Dragon and am pleasurably surprised when it is not countered. I Magma Jet the jellyfish to remove her blocker, then go in with the Firewalker. Sam Gushes at the end of my turn, digging for answers, but all she comes up with is an Ophidian. I untap, lay down a free Oxidda Golem and a Seal of Fire, and go all in to get there.

Two strong starts, two losses. Sam’s looking a little demoralised as we begin our final match. Nothing but land drops and draws until I lay a Soulbright Flamekin on turn 2, which seems to get things started. Sam plays a Morph on turn 3, I reply with an Inner-Flame Acolyte and a 4-point attack. She draws and passes the following turn, then spikes my Furnace Whelp with a perfectly-timed Daze. Knowing the splendid uses for the Flamekin’s mana-generating ability, I opt nto to risk it, and go in with just the Acolyte. Sam’s down to 14 as turn 5 begins, but she pulls a Spire Golem and plays it on the cheap (with five Islands in play, it’s a bargain for one mana).

I play Seal of Fire, attack for two and bring out the Rakdos Pit Dragon. Sam lays an Island and passes, so turn 6 sees the start of my assault. A timely Repulse sends the Dragon back to hand, but Sam is surprised when the Dragon stays there and a Flametongue Kavu comes down, sniping her Golem from the sky. I try to press the advantage and sacrifice the Seal to catch a Morph, but she turns it over to reveal the surprisingly robust Fathom Seer, letting her draw two cards and survive the burn.

Another draw-go from Sam, and time is running out. I attack in for 6 (putting her at 6), but Sam scores a victory when she Condescends the Dragon. Sam plays the Aethersnipe, bouncing the Acolyte, but she knows she’s doomed. I replay the Acolyte, giving itself the bump and haste, then come in with both. She trades the ‘Snipe for the Kavu, takes 4, and I show her the Fireblast in my hand. Three up, three down. 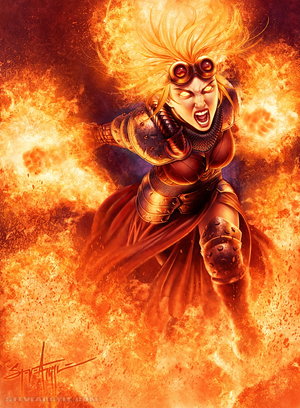 I don’t think I could have asked much more from the deck than it delivered in these three games. Although at times frustrated by Jace’s timely defenses, it consistently got out early with some aggressive beaters, then had plenty of burn for judicious pruning or direct damage. Indeed, that’s how Chandra almost has to win against Jace, for if the Blue deck is given the time and space to establish itself, the prospects of a Red victory rapidly diminish. I drew well, even in the first game operating with only four land, and the deck showed itself to be well-designed.

I tend to like decks with a lot of analogues (cards with similar functions despite slight variations). A Chandra player can rely on early Firebreathers and other pesky threats to start the pressure immediately. All in all, my initial hesitation was for naught. Sure Jace’s deck is solidly put together, but with a little momentum and steady draws Chandra has the keys to victory in grasp.

As a product overall, Jace vs Chandra is an excellent pick-up. If you can find one on the cheap, I highly recommend doing so- it’s especially useful for those who have friends who may want a game here and there but don’t have decks of their own. I’ve also run both of these against the Garruk and Liliana decks, and they’re all superbly balanced offerings. I have yet to play or review the Elves vs Goblins decks, but if the second Duel Decks offering is any indication, Wizards is doing it right.