Duels of the Planeswalkers: Hands of Flame (Part 2 of 2)

From Sligh to RDW, mono-red burn has tended to follow a similar design philosophy, and Hands of Flame is no exception. This deck is packed with small, aggressive creatures, says the strategy insert. However, before assessing this deck it might be useful to spend a moment understanding the design philosophy of these preconstructeds.

Duels of the Planeswalkers was essentially designed as an arcade game ‘version’ of Magic, and so these decks “inspired by” the arcade game, should be viewed through that prism. Intermediate and advanced Red players of the (official) game may be well acquainted with the Philosophy of Fire and what it takes for Red to ‘get there’ (hint: speed kills), but when Hands of Flame claims to be “packed with small, aggressive creatures,” it means something slightly different:

And what’s more, almost half (10/22) of these are vanilla critters. If your collection is a little short on Hill Giants, Hands of Flame packs a full playset!

It’s easy to nitpick some of the card selection, though, so let’s next take a look at where this deck works best- its rares.

Hands really delivers the goods here. The premium foil is Kamahl, Pit Fighter who is a beast in this Duels environment. His critter counterpart is the Shivan Dragon, which, while long since ecliped by better scaly flying options for his mana cost, is still a simple yet iconic beater and a well-placed power card for the newer player these decks cater to. Banefire adds a third X-mana burn to the suite, Rage Reflection acknowledges the preeminent place melee has in this deck’s strategy, and knowing how I was nostalgic for Tempest block cards, I can only gaze with an approving eye at the inclusion of Furnace of Rath.

The Uncommons are generally solid if less sexy, though two of them make me baulk. First is Dragon’s Claw– it seems to be that each of these decks will include two of these barmy life-gainer artifacts (which, to be fair, newer players often gravitate toward). The other is even less comprehensible. 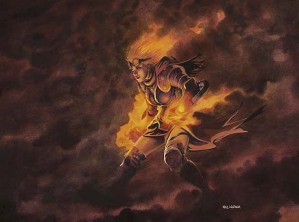 On the Other Hand…

I once bought a bulk collection from some fella in the parking lot of a grocery store, which felt about as dodgy as it sounds, and although not wanting to disappoint the little one I bought them, I was a bit underwhelmed with the cards. In particular was a Mons’s Goblin Raiders which had a gold star for an expansion symbol. Surely, I noted in horror, that card couldn’t possibly have been printed at that rarity, and I immediately gave it to Sam so that I might never have to gaze upon it again.

And while I’ve since learned that that was indeed a misprint, I get a similar queasy feeling when I regard the Earth Elemental at Uncommon. He’s a 4/5. For 3RR. That’s it. No powers or handy special abilities. Just longer-than-average flavour text. I’m not that familiar with Tenth Edition, but I can only speculate that this must have been a decision based on Limited, if they wanted to decrease the frequency with which a 4/5 body appears at the table. That’s the only reason that makes sense, otherwise it just makes my head hurt.

As for the non-creature cards, some burn and a couple of very Red tricks (the once-Black now-Red Enrage, and Act of Treason) round out the deck quite nicely for creature support.

FINAL GRADE: Like all grades for these Decks, it should be stressed that it’s relative to the Duels sets… matched against other, normal Magic preconstructed decks you’d probably drop a point from the grade, but I like what they did with Red here, and it did flow well in playtesting. 3.75/5