Duels of the Planeswalkers: Thoughts of the Wind (Part 1 of 2)

“I hate this deck,” muttered Jimi, shuffling in between games 2 and 3 yesterday. Ultimately handed three losses in a row, it wasn’t hard to understand why. Why surely Jace- the “most powerful card in Standard,” deserves a better Planeswalkers deck, and I resolved to get to the bottom of things. Was it bad draws, bad plays… or is Thoughts of the Wind just a bad deck?

I sat down and pulled the deck apart.

Thoughts runs a surprising sixteen creatures. It looks to get in some early damage with a playset of one-drop Cloud Sprites, takes the day off on two-drops (perhaps expecting you to Negate or Essence Scatter?), underwhelms on three-drops with a pair of Wall of Spears and a single, lonely Phantom Warrior, and really starts kicking in the four-to-six-drop range.

1x Mahamoti Djinn (despite being the foil rare in the set, he’s a pretty unsexy 5/6 vanilla)

1x Denizen of the Deep

So obviously, Thoughts asks you to hold down the fort a bit with some disruption while you build from gnats to beats, skipping right over the middle. I wasn’t impressed with either of the deck’s heavies- having a vanilla critter as your premium foil is a bit underwhelming (for the same cost I’d gladly trade a point of toughness for Shroud), and Blue has plenty of ways to turn the Denizen’s drawback (return each other creature you control to its owner’s hand) into a benefit with comes-into-play-effect critters. This deck runs precisely none of those, and given the presence of a Mind Control in the deck, it’s an even greater liability.

So the obvious question becomes, if Thoughts isn’t asking you to go aggressive on your second through fourth land drop, what is it expecting you to do, particularly on that creatureless second turn?

Umm, no… countering his two-drop with my own gives me nothing in the way of tempo advantage. I’d rather save these for something that hurts them to lose. Same goes for Negate and Cancel.

Again, same problem as with the counters. There are probably better uses for this one down the road a bit. 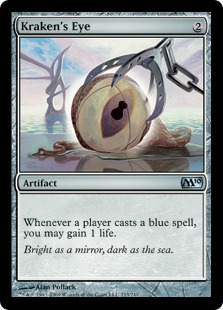 Counterbore on the other hand seems to have been included in a fit of irrational exuberance for countermagic. Lobotomizing another player usually has its greatest effectiveness in Constructed play, where running three-ofs and four-ofs are much more common than in these preconstructed decks. Not the best choice by the design team.

So from the first pass, this deck seems a little flawed. It wants to saddle two horses by having elements of both aggro and control, and ends up doing neither especially well. What Blue mage would squeal in delight topdecking a Cloud Sprite late in the game?

Of course, it’s one thing to poke about the deck at liesure, and entirely another still to see how it holds up under fire. Join me on my next post, where I’ll be taking Thoughts of the Wind on a little test drive. See you then!