It’s our opening tilt for Gatecrash, and we’re excited to begin tearing into the set’s precons. Joining me at the table is the lovely Jimi, and she’s selected a deck close to her own heart. Can Boros Battalion impose order onto the chaotic battlefield, or will it fall prey to Orzhov Oppression?

END_OF_DOCUMENT_TOKEN_TO_BE_REPLACED 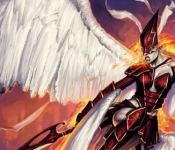 Mark Rosewater notably once wrote that 1998’s Urza’s Saga was “the only time in the eight years that I’ve been working at Wizards that R&D as an entirity got pulled into the president’s office and was yelled at.” As we covered in our review of The Plague, the set suffered from some very serious shortcomings in terms of mechanics and power level, and is likely uncontested in claiming the dubious honour of most broken block of all time. To those of a more optimistic mindset, however, crises can be regarded as an opportunity in waiting, as often one has the opportunity to address the problem head-on. For Wizards, this meant acknowledging the core problem and fixing it.