Duels of the Planeswalkers 2012: Wielding Steel Review (Part 1 of 2) 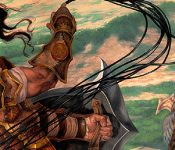 For every point, it seems, there must be a counterpoint. Much of our look at Duels of the Planeswalkers thus far has focused on decks that have either significantly evolved a previously-employed archetype (in Duels 2009), or instead chosen to focus on a different facet of the namesake planeswalker.

Today, we look at a deck that has remained largely unchanged.

Being a traditional White Weenie deck shell, Wielding Steel frontloads its creature contingent with a plethora of cheap beaters. The playset of Elite Vanguards should come as little surprise by now, as they’re a fixture of the preconstructed scene in decks featuring this archetype. They aren’t the only familiar faces. Weapons of the Warrior featured a pair each of the Kitesail Apprentice and Kor Duelist, and this updated list sees little reason to differ. Both of these naturally become better when equipped, not even counting the bonus conferred by whatever equipment you’ve stuck on them.

A new face appears in the form of a pair of Gideon’s Lawkeepers, a functional reprint of the Goldmeadow Harrier and a classic of type in White (see: Master Decoy, Stun Sniper). Tappers fill an important role in a swarm deck, letting you remove an opponent’s best blocker from contention. Of course, this usually comes at the cost of tapping your tapper, so it is not without an opportunity cost in terms of aggressive output.

Moving on to your two-drops, the backbone of the slot is another playset, this time of Glory Seekers. These are the Runeclaw Bears of White, dull but dependable. Kor Outfitters are another Kor creature that has a natural affinity for gear, and again we find a trio included in the deck. Once again, there are echoes of Weapons of the Warrior with the inclusion of the Stoneforge Mystic, even if as before the mana savings you can realise from her activated ability are fairly minimal.

With much of the deck behind us, we find some support players in the three-drops before we climb to the top of the mana curve for the closers. Gideon’s Avenger was another planeswalker-themed cycle card in Magic 2012, and synergised with the aforementioned Lawkeeper. Tap a creature down, the Avenger gets bigger and can attack with one less defender to worry about. There’s a further synergy here with the deck’s other three-drop, the Kor Hookmaster. A spell-on-a-stick, the Hookmaster can lock down an opposing creature for a turn, just what the Avenger likes to see.

Finally, we come to the top of the curve with some of the deck’s closing options. A pair of Serra Avengers are a classic White closer, a five-mana evasive threat. That’s dangerous enough once you land her, as she can support both on offense and defense, but in an equipment-filled deck she’s a natural target.  Finally, there’s a Captain of the Watch. Another holdover from Gideon’s first deck, this does no favours to an argument for differentiation- this might be the least-evolved deck we’ve seen from one generation to the next. 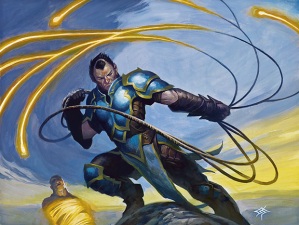 Point it at the Enemy

The central point of Wielding Steel is its suite of equipment- indeed, it’s the deck’s raison d’etre. In the deck’s previous incarnation, we saw Kitesails, Trusty Machetes, and a Pennon Blade, and all three reapppear here in the same quantities. The Kitesails offer some provision for evasion, which is quite useful in a cheap, ground-based-assault deck that is susceptible to stalling in the red zone once an opponent starts bringing their larger threats on-line. Although this is mitigated somewhat by the presence of the tappers, making creatures harder to block without ‘wasting’ a card to do so is always good.

The Machete and Blade both are simple stats-pumpers, with the latter having the distinction of being an artifact that you can play for less through the Mystic. In lieu of a pair of Bone Saws, though, we get an Infiltration Lens from Scars of Mirrodin. This is a solid piece of gear that offsets the tendency of your creatures to be outclassed on the attack by giving you the prospect of free cards if they’re blocked. Although later on your cards are likely to be cheapp creatures given the concentration of them here, sometimes numbers rather than brute strength are what get you there.

There’s also a copy of Strider Harness. Somewhat expensive to play but very cheap to equip, this can help add a touch of aggression to the deck by letting your beaters hit faster. Of course, to get that you have to pay three mana for a card that does nothing on its own, so it’s almost like you’re simply ‘charging up’ and in the end breaking somewhat even.

For removal, again the deck wants to do most of its talking in the red zone. As a result, you’re looking at a trio of Arrests as the full extent of it, and it’s not nearly robust enough to reliably appear from game to game. In that sense, it’s almost like a bonus, but given the presence of the Lawkeepers you’re not entirely powerless to affect the other side of the table. All the same, it’s still better than the Guard Duties that polluted the previous deck.

Finally, there’s a single copy of Brave the Elements, an uncommon from Zendikar. Like many protection spells, this one can serve a number of purposes ranging from countermagic to ersatz removal spell to alpha-strike enabler. As a miser’s copy, it’s a useful inclusion.

Given the obvious parallels between this and Gideon’s previous deck, we don’t expect a lot of differences between how this and Weapons of the Warrior play out. Still, every deck deserves its own day, and we’ll be taking Gideon to war.