Duels of the Planeswalkers 2012: Machinations Review (Part 2 of 2) 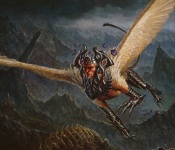 Tezzeret’s back, and he’s looking to prove the power of artifice. To do so, he’ll have to pass through fellow Alara alum Sarkhan Vol and his deck, Dragon’s Roar. Can the machinery stand up to the raw fury of the enraged dragon?

I’m on the play for our opener, and Sam and I trade land drops to kick things off. I then deploy the game’s first creature, an Alpha Myr, while Sam doubles up with a Dragon Fodder. Next turn I add a Pilgrim’s Eye, fetching up a Swamp. Sam then scores first blood, nicking me for 2 with the Goblin token tandem.

Now turn 4, I counterattack for 3 with the Myr and Eye, while Sam responds in kind before playing a Furnace Whelp. Back to me, I swing past with the Alpha Myr to leave Sam at 15, then Shape Anew the Pilgrim’s Eye. I hit an artifact on the fourth card down, an Etched Champion. Over to Sam, she Disfigures the Champion before it can become more than just a nuisance, then plays another Dragon Fodder before attacking in for 5 (pumping the Whelp once).

Looking to bolster my defenses, I play a turn-6 Stone Golem. Sam attacks back for 2 with the Whelp, pumping it once. My next turn is a blank, and Sam simply summons a Voracious Dragon, devouring her way to victory by eating her Goblins and blasting me for lethal.

I lead off with an Island, while Sam plays a Festering Goblin to begin. I then bring out the Alpha Myr, while Sam swings for 1 with the Goblin before adding a Goblin Piker.

Now turn 3, I counterstrike with my Myr for 2, following up with a Snapsail Glider. For her part, Sam drops me to 16 after turning both her creatures sideways. Next turn, I continue the tit-for-tat with my Myr and Glider, leaving Sam at 14. Back to her, she carves off another 3 points with her Goblins, leaving me at 13. When she next tries to pull ahead with a Furnace Whelp, however, I’m compelled to counter it with a Stoic Rebuttal.

Now turn 5, I play a Terramorphic Expanse, cracking it to find my first source of White mana. I then swing in with my two artifact creatures for another 4 before passing, while Sam draws us level at 10 when she returns fire for 3 with the Goblins. A Dragon Fodder then gives her another pair of 1/1’s. Next turn, I add a second Snapsail Glider, activating metalcraft. I then play a Hunger of the Nim on the first Glider, giving it a +3/+0 bonus. Swinging in for 5, it cuts Sam in half. Back to Sam, she Disfigures the newer Glider, then summons a Voracious Dragon, devouring her four Goblins and blasting me down to 2 life. Adding injury to injury, she then kills my Alpha Myr with the triggered ability from the Festering Goblin.

I’m able to claw the damage back, however, with a turn-7 Magister Sphinx, setting my life total back to 10. Back to Sam, she plays a Ruby Medallion and passes. Next turn I add another Alpha Myr, while Sam matches with a Crucible of Fire.

My turn 9 is a blank, while Sam manages another Dragon Fodder. Back to me, I add a Venser’s Journal, giving me at least some prospect of raising my life total- with all of one card in hand. Sam simply plays a Raging Goblin and passes.

Now turn 11, I gain 1 life off the Journal to go to 11, adding a Razorfield Thresher. Sam’s next turn is a blank- as is mine (though I gain another point of life). When Sam tries for a Volcanic Dragon on turn 12, I Undermine it- and that gives me the break I need. With Sam now down to 2 life, she can’t stop both my Sphinx and Snapsail Glider, and I pip her at the finish to claim Game Two.

Sam leads off with Raging Goblins on turns 1 and 2, but I seal off the rush with a second-turn Etherium Sculptor. That’s a setback, but the worst of it for Sam is that she’s stuck on two lands. Her turn 3 is a blank, while I add a second Sculptor. A Ruby Medallion on turn 4 offers some relief, but I continue to lay land while she does not.

Now turn 5, Sam finds a Goblin Piker, while it’s my turn to have a blank. Next turn, Sam’s turn is another blank, while I crack another Terramorphic Expanse for another Plains.

A turn-7 Manic Vandal gets Undermined, dropping Sam to 17. She then attacks for 2 with the Piker, and I’m left at 15 in this slow-to-develop game. Back to me, I then find my Magister Sphinx again, this time setting Sam’s life to 10. All she can do is lamely play a Giant Scorpion after finding a Swamp. I hammer in for 5 with the Sphinx.

Now turn 9, Sam Assassinates the Sphinx, but it draws a Stoic Rebuttal. That’s her back broken, and Sam then scoops.

The inclusion of the Shape Anew and Darksteel Colossus give the deck the feeling of being a bit clever, but on the whole the effect is rather wasted. Without any way to consistently influence the cards in your library- say, with a quartet of Sage Owls or the like- the effect is largely wasted. Sure, every now and again you’ll be able to pull the combo off, but by and large the Colossus is going to be a dead draw rusting in your hand. Cards like this are something of a self-fulfilling prophecy. The defense will often be, “oh, but they really help out in the long game,” not realising that the reason that there even is a long game some of the time is because of cards like this. There are a lot better cards to draw almost all of the time here, and the deck tries to be too clever by half by including either card. They’re both somewhat poor here, as Shaping into a Venser’s Journal isn’t all that great, either.

Still, when you take that element away from the deck, it’s not a back collection of cards. The playset of Etherium Sculptors define the deck much in the same way that the four Heedless Ones did for Nissa’s Guardians of the Woods. The removal is tolerable, the counters a good addition to the deck in the later stages of its development. I has little problem turning on the deck’s metalcraft, though it would have been better served with a few more trinkets and a few less expensive cards like the aforementioned Journal or Razorfield Thresher. That’s partly by design, however, as the deck really does want to run some expensive cards to have the Etherium Scupltors discount. The only problem is, when you don’t find them, the deck can seem a bit bloated.

HITS: Good solid core of an artifact/creature deck, with metalcraft well-placed in cards like the Glider and Etched Champion; Magister Sphinx is a strong card here, and about as expensive as the deck can stomach

MISSES: Too many expensive cards leaves the deck struggling when the Etherium Sculptors can’t be found; the Shape Anew/Darksteel Colossus combo is cute, but not very effective