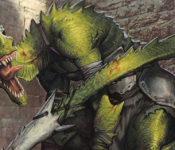 Aside from a brief revisit with the upcoming Strength of Selesnya Event Deck, this is our last review for Dragon’s Maze and, indeed, all of Return to Ravnica block. Can the Gruul send us out on a high?

Sam opens with an Island, while I begin with a Gruul Guildgate. Next turn, she erects a formidable defense with the Murmuring Phantasm, and we swap land drops until my turn-4 Viashino Shanktail.

Now turn 5, Sam plays a Forest. I attack with the Viashino, but Sam blocks. I then add the Saruli Gatekeepers, but forego the lifegain bonus as I don’t have a second Gate. It might seem worthwhile to wait for one, but I’m leery of giving Sam too much time to develop and need another attacker to get past her wall. Next turn, she plays the Opal Lake Gatekeepers, like me foregoing the bonus for the solid play-it-now benefit. I play a Forest and pass.

We again settle in to land-drop swaps, and it’s not until turn 9 that we see any development. After a fast and furious friendly, the glacial pace of this game is a real surprise. Sam’s play is a Crocanura, and she passes after it’s settled in. Back to me, I swing in for 5. Sam blocks my Gatekeepers with her Phantasm, and my Shanktail with her own Gatekeepers. I then bloodrush a Viashino Shanktail onto my Shanktail (yo dawg…), killing the blocker. Next turn, Sam plays Vorel of the Hull Clade, evolving the Crocanura. She then attacks in with it for 2, scoring- get this- first blood. Thanks to the land-heavy Intro Pack environment, I’m able to live the ‘dream’ of a turn-10 10-point Ground Assault, killing Vorel before he has a chance to begin his doubling shenanigans. I go one further, next playing Ruric Thar, the Unbowed. Take that!

Now turn 11, Sam summons a Crowned Ceratok, again evolving the Crocanura. I swing for 9 behind Ruric Thar and the Shanktail. Sam blocks the Shanktail with her Phantasm, then gang-blocks Ruric Thar with her Crocanura and Ceratok. I fry the latter with a Volcanic Geyser, saving my champion and resulting in a major loss for Sam. I then add a Cobblebrute and end the turn. Next turn, Sam finds a Krasis Incubation and wastes not time dropping it on Ruric Thar, even though his triggered ability blasts her for 6- the first damage I’ve landed on her all game. Back to me, I swing for 10 with everything. Sam again blocks the Shanktail with the Phantasm, but can’t stop the remaining 7 from getting through. With her at 7 life, I play a Feral Animist– with enough mana on the board to make him a 16/1 next turn if I chose to.

Sam’s turn-13 Battering Krasis is her last gasp. I alpha strike next turn. She’s got enough to chump her way to life for one more turn, but drawing nothing, she kills herself with a Phytoburst.

This one starts out much like the first. Opening land drops, with me finding a Gate and Sam playing a Murmuring Phantasm. A turn-3 Bred for the Hunt promises something new, while I add a Zhur-Taa Druid. Next turn Sam summons a Crowned Ceratok, while I use the Druid to power out a Cobblebrute, pinging Sam for 1 in the process.

Now turn 5, Sam finds Vorel of the Hull Clade, who is much less of a threat at the moment given Sam’s board state. The Druid again helps me ramp as I tap out to drop down Ruric Thar- a most unwelcome sight for Sam. Back to her, she adds the Opal Lake Gatekeepers and passes. I swing in for 11 with Ruric Thar and the Cobblebrute. Sam again risks a double-block on the bug fella, and a rout is just a bloodrushed Viashino Shanktail away. Ruric Thar claims two more scalps for the mantle, and then is joined by a Feral Animist.

Now turn 7, Sam summons an Elusive Krasis. Back to me, I keep the pressure up with a 13-point swing. Sam blocks the Animist with Vorel, and I pump him to force the trade. Her Phantasm falls to the Cobblebrute, while the Krasis steps in front of Ruric Thar. It’s a total blowout, and Sam meekly scoops after the next draw.

Sam has a much more promising opening this time with a turn-1 Cloudfin Raptor, while I get in a next-turn Zhur-Taa Druid. Back to Sam for turn 3, she then plays a Centaur Courser to evolve the Raptor, swinging in with it for 1. I use the Druid to help fund a Saruli Gatekeepers, taking Sam to 19.

Now turn 4, Sam again finds Vorel, and this time he means business. His arrival again evolves the Raptor, and she sends it in for 2. For my part, I summon a Feral Animist and pass. Back to Sam, she foregoes triggering Vorel to play another Centaur Courser, evolving the Raptor once more. It comes across for 3, and I’m down to 14. I summon a Ruination Wurm, but barring a topdeck I’m a defeated man.

Sam drops a Simic Guildgate on turn 6, then activates Vorel, doubling the counters on the Raptor. It sails in for 6, taking me to 8. I draw nothing, and scoop.

Although I try to be as neutral as I can be for reviewing decks on the site, like any Magic player I do have my own preferences and biases. That said, when a deck that falls into my less-appreciated archetypes blows me away with fun gameplay, it does a lot to recommend the deck. Gruul Siege is just such a deck. I had an absolute blast playing this one, and to my surprise found that a card that came out of nowhere to rank amongst my personal top 10 for Dragon’s Maze, the Zhur-Taa Druid. 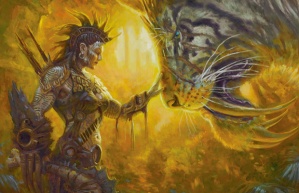 Although the write-up above didn’t showcase it especially well, in the pregame friendly I managed to find Druids on turns 3, 4, and 5. Ramping out my mot powerful cards while pinging Sam from across the table to the tune of 3 a turn felt positively… Orzhovian. With mana burn a thing of the past, that’s guaranteed one-sided damage at the end of an opponent’s every turn, unless you use it for mana (in which case the damage just arrives early).

Ruric Thar too proved to be a treat to play with. Like all symmetrical effects, the object is to warp the symmetry so it affects your opponent less than it does you, and thanks to bloodrush it works exceedingly well. For all that, there’s a certain balance achieved by the fact that he must attack each turn if able, meaning your opponent gets a fair shot at killing him through attrition and turning off the effect. It’s a great centerpiece to the deck, a rug that really brings the room together.

Overall this is one of the better decks from the Return to Ravnica environment. Although some of the bloodrush creatures do feel a bit like filler (hello, Rubblebelt Maaka), you also get aces like the Ghor-Clan Rampager and Viashino Shanktail. The burn package is reasonable for the environment, though the Volcanic Geyser is a nice touch- even moreso in this land-rich environment (same for Ground Assault). Finally, Armed // Dangerous is a dream of a card, a wonderful two-card comb that can end games for a very reasonable five mana. This one’s a keeper.

Hits: Good mix of bloodrush creatures keeps your opponent off-balance; Zhur-Taa Druid is an all-star in the deck; good rare selection with Ruric Thar, though the Skarrg Goliath is a bit pricey; loads of fun to play

Misses: Burn suite underwhelming, and lacks consistency; mana curve a bit on the high side, though it works better than it might otherwise with the Druids, Cluestones, and heavy land count

Read more from Dragon's Maze, Return to Ravnica Block
← Whispers of the Muse: Benjamin M’s “Charge of the Boros”
Duels of the Planeswalkers (2009) Expansion Pack 3: Master of Shadows Review (Part 1 of 2) →
8 Comments Post a comment