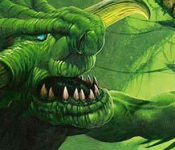 Ten mana will get you quite a lot these days. Regardless of colour, cobble together that much at the very least and you’ve got yourself an Eldrazi, either Kozilek, Butcher of Truth or the Spawnsire of Ulamog. Magic 2013’s Omniscience costs ten- albeit three of it Blue- and lets you play your spells and creatures from your hand for free. It could also get you a Broodstar, crush your opponent’s board with a Curse of the Cabal, blast the board itself with a Soulscour or Decree of Annihilation, or even summon Progenitus itself to your aid. You know what else ten mana can get you?

Wow, not much of a bargain that, especially when ranked alongside some very stark contrasts. And to be fair, The Hive doesn’t actually cost ten, so much as two payments of five. Although even then it doesn’t seem like a very fair offering, it needs to be taken in historical context. The Hive, you see, was the first card to ever create creature tokens, and as such was the only one of its kind in Alpha. For all the brilliance of Richard Garfield in setting up the principles of the game, the perspective of time has indicated that some of the power levels weren’t entirely dialed in at time of print (see: Ancestral Recall, Black Lotus, etc). The idea of a “repeatable” creature maker as a “Mono Artifact” was something to be cautious of, and the card was priced accordingly.

When Arabian Nights soon followed, creature tokens came along for the ride- though still in very conservative quantities. The Bottle of Suleiman could make a 5/5 flying Djinn token, while the Rukh Egg was the first occurrence we see of a nonartifact card generating a token, in this case a 4/4 Bird once the Egg was ‘broken.’ Antiquities then gave us the Tetravus, but it wasn’t until Legends that we saw the concept blossom with five different token-making cards. Whether it be Wolves or Sand Warriors, Minor Demons or Snakes, token creatures had proven their worth and have been a staple of the game ever since. Indeed, the most recent mechanic for the Selesnya Conclave in Return to Ravnica, populate, is predicated on this very thing.

Today’s deck, Swarm & Slam, is cut from the same cloth. Although its involvement is more thematic than mechanic, it asks a simple question- how viable a strategy is it to go in heavy on creature tokens?

Swarm & Slam is an intriguing hybrid of strategies, carrying elements of both Green Stompy and White Weenie. It looks to deploy a range of threats, peaking in the midgame with a substantial endgame package. Add in some mana acceleration, and that is a fairly common Green template. On the other hand, it borrows a raft of combat trickery and removal from the smaller White Weenie archetype. Indeed, the only thing it’s really missing from there is equipment.

The deck opens with a full playset of Gold Myrs. These offer some crucial mana ramping to help propel you into some of the deck’s more expensive options. Thanks to the inclusion of a Myr Matrix– one of the deck’s two rares- they can also become reasonably solid bodies. Though giving your four Myr +1/+1 with the ability to make more might not seem like the best use of a rare slot, there is some method to the madnes as we’ll explore in a bit. You also get two Pteron Ghosts here at this early drop slot. Although you have a number of creatures with reach, this is one of the very few options you have for flying proper- the only other being from the Wirefly Hive.

For three-drops, you have a pair of Viridian Shaman. These 2/2 bodies offer added value by destroying an artifact when they come into play, but the lack of a may clause means that the ability’s compulsory. Given the artifact-rich environment of Mirrodin/Darksteel, however, this presents much less of a problem than it might in others. Moving up to the four-drops, you have a similar lack of options with just a pair of Tel-Jilad Outriders at your disposal. These are silver bullets against much of what you’ll have to face, since their protection from artifacts gives them quite a bit of resilience.

Once you’ve made it to the top of the mana curve, the deck offers the highest diversity in creatures. A trio of Tangle Golems lead the way, 5/4’s which retail for a full seven mana but can be brought out at a discount the more Forests you’ve managed to put into play. Though this isn’t quite the steal in a two-colour deck as it is in a the set’s one-colour offerings (such as the Dross Golem in Mind Swarm), it still should reliably manage to arrive at a solid discount given that two-thirds of the deck’s lands are Forests.

Next up is the Tangle Spider, a 3/4 that can be played at instant speed. This gives the deck a measure of surprise against attackers, and can also be used to ambush an opponent who perhaps didn’t expect to have to deal with an extra attacker when cast at the end of their last turn. It also has the common Spider’s ability to serve as a defense against creatures with flying. Overlapping with that is the Tel-Jilad Archers, who are this set’s version of the classic Giant Spider. For the extra mana you pay above the Giant Spider’s cost, you also get protection from artifacts, which can be invaluable here. Completing the circle is a pair of Infested Rootholds. These 0/3 Walls are fairly pricey at five mana, even with their protection from artifacts. By way of upside, they do offer a source of 1/1 Insect tokens each time your opponent plays an artifact spell, though that conditional benefit doesn’t seem quite enough to justify the pricetag.

Bear a Mark of Power

With only half of the deck’s nonland cards being creatures, that leaves plenty of room for diversity amongst its noncreature package. Because the deck’s principal aim is to flood the board with creatures, clearly a number of these cards must similarly be dedicated towards that end. Nine of the eighteen certainly deliver.

If you’re looking for 1/1 Soldiers, a pair of Raise the Alarms will give you a small squad of them. If, instead, it’s 3/3 Beasts you’re after, the Pulse of the Tangle gives you one on-curve with the promise of more if cast under the right conditions. If the deck is doing what it wants to do, you’ll seldom find an opponent with more creatures than you, so you’ll hope to draw this early when you have the greatest chance of putting it to full advantage.

Neither of these cards gives you much option in what you get, and that’s where One Dozen Eyes comes into play. With the ability to give you wither a swarm of 1/1’s or a single fat 5/5 beater, the card’s entwine is nearly an afterthought. If your opponent has permitted you to get nine mana into play, they deserve all the eyes they’ll get. For repeatable token generation, the aforementioned Myr Matrix can crank out Myr while the Wirefly Hive can spawn volatile Wireflies. Finally, a pair of Spawning Pits can turn doomed, dying, or otherwise useless creatures into 2/2 Spawn tokens.

One can be forgiven for the feeling that this seems all a random hodgepodge, and to a certain degree that’s about right. But Swarm & Slam does have an extra few tricks up its sleeve. the Thunderstaff provides a ward against incoming damage if left untapped, while being able to convert into an offensive power boost when needed. It’s here that we see the grand plan of the deck begin to unfold, for the boost of the Staff can be tremendous if you have enough creatures in play committed to the attack. A bunch of 1/1 tokens might not be too intimidating, but 2/1’s become a very different prospect quite quickly. Alternately, with a Stir the Pride those 1/1’s become 3/3’s with an option for lifelink (or vice versa).

The real joker of the deck, though, is the full playset of Echoing Courage. This card is one of a cycle of five cards in the set, with effects mirroring a staple from their colour. Under normal circumstances, this doesn’t seem especially strong a card. Unless you’re playing something like a Squadron Hawk, which can go fetch its fellows from your library, such a boost will usually be limited in scope- how often can you expect to have four copies of the same creature on the board? This makes the card a conditionally worse Giant Growth. But with tokens, the dynamic shifts entirely. Suddenly those Insects from One Dozen Eyes and the Infested Roothold take on a much greater threat profile- the five from One Dozen Eyes alone becoming 15-power’s worth of creatures. The same goes for those 1/1 Soldiers from Raise the Alarm which, unlike the Insects, can be deployed at instant speed for an extra surprise.

The remaining three cards round out the deck. There’s a hint of removal with an Arrest and Purge, one copy of each. For a creature-oriented deck this is fairly Spartan, but the deck’s aim is to simply overwhelm rather than surgically remove any barriers that stand in the way. Finally, there’s a Test of Faith, which combines damage prevention with creature augmentation.

When compared to the previous two decks we’ve reviewed, Swarm & Slam seems much less cohesive. The strategy seems fairly loose and poorly supported, and it’s questionable whether “make tokens and pump them” will work here. Still, there’s only one way to find out, and we’ll be particularly keen to see how this deck holds up.