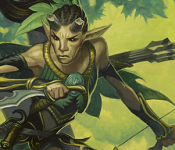 It’s our opening game for the Duels of the Planeswalkers (2009): Expansion Pack 2 review, and I’m joined at the table by Jimi. Long a fan of Red, she’s excited to get ahold of Chandra’s latest deck Heat of Battle, while I buckle in for a return to the tumultuous terrain of Zendikar and its landfall mechanic. Can I take Rhys to glory, or will be Chandra’s day when the ash settles?

It’s an inauspicious beginning for me as I mulligan down to 6 on the play. Nevertheless, I gamely lead with a Sunspring Expedition, while Jimi plays a Mountain and passes. Next turn I drop a Forest, adding a quest counter to the Expedition. Jimi plays a second Mountain.

Now turn 3, another Forest gives me a second quest counter, after which I summon the game’s first creature in the form of a Grazing Gladehart. Jimi matches it with a Fiery Hellhound. Back to me, I play a third Forest to mature my Expedition, and go ahead and cash it in for 8 life. Atop the 2 the landfall gave me from the Gladehart, I’m now sitting pretty at 30 life. I pass the turn to Jimi, and she attacks with the Hellhound for 2. I block it with the Gladehart, as if in challenge, then Harrow in response. Not only does this fix my mana, but it gives me 4 life from the Gladehart, going up to 34. Jimi declines to pump the Hellhound, since it’s already a goner, and both creatures head for the graveyard. Jimi summons a replacement Hellhound and ends the turn.

Now turn 5, I summon a Territorial Baloth and pass. Jimi attacks with her Hellhound and I decline to block. She pumps it three times, and I’m now down to 29. Back to me, I counterattack for 4 with the Baloth, missing a land drop- then to Jimi’s horror I play a second one. For Jimi’s part, she’s also been missing her drops, and is accumulating cards in hand. She blasts me with a Volcanic Hammer for 3 to get down to seven cards in hand, then passes the turn right back.

A Forest on turn 7 lets me turn both Baloths sideways to the tune of 12 damage. Jimi chumps one with her hapless Hellhound, taking 6 off the other to go down to 10. I then play a Steppe Lynx and pass. Over to Jimi, she double-blasts a Baloth with more Hammers to kill it, then ends her turn. Next turn I miss the land drop again, so it’s just 4 off the unbuffed Baloth in the red zone. Down to 6 life, Jimi summons some defense in the form of a Canyon Minotaur.

Now turn 9, I use a Pilgrim’s Eye to grab a Forest, pumping both Lynx and Baloth. I attack with both, and Jimi’s forced to block the Baloth with her creature. She takes 2 off the Lynx, going down to 4. Next turn she draws nothing, and concedes.

On the play, Jimi plays a Mountain and passes, while I once again begin with a Sunspring Expedition. Back to Jimi, she then brings out a Flamekin Spitfire, while I simply drop a land for a quest counter. Defenseless, first blood goes to Jimi as she streaks across the red zone with the Spirfire for 1, while I then plug the hole with a Snapping Creeper.

Now turn 4, a Fiery Hellhound is next up for Jimi, though she wisely holds the Spitifre back. I play a Plains, then pop my fully-loaded Expedition for 8 life to go up to 27. I then attack in for 2 with the Creeper, taking Jimi to 18. Back to Jimi, she attacks with the Hellhound for 2, pumping it 4 more when I decline the block to leave me at 21. She passes, and I send in the Creeper for 2, deliberately withholding the land in my hand so that it won’t get vigilance.

Now turn 6, my gambit pays off as Jimi attacks with both Hellhound and Spitfire. I kill the Spitfire with a Divine Verdict, taking 4 off the Hellhound. It seems an odd play, but given the pinging ability of the Spitfire it was keeping my smaller creature tied up in my hand and had to go. Back to me, I play an Evolving Wilds, attacking for 2 behind the vigilant Creeper. I needn’t have bothered, as it simply eats an Incinerate and dies. I replace it with a Steppe Lynx and pass. Jimi attacks in with the Hellhound next turn, and I block it with the Lynx- cracking the Wilds to hit my landfall and force a trade. For my part, I play a Plains and pass.

A turn-8 Fire Elemental tells me Jimi’s getting serious, while all I manage is a Steppe Lynx. Next turn she attacks in for 5, and I take it on the chin. She follows with a Canyon Minotaur, then end the turn. Back to me, I play a Farhaven Elf, pumping my Lynx up to 4/5 after I also play a Forest. I send it into the red zone, and it swipes Jimi down to 12 life.

Things go from bad to worse on turn 10, though, when Jimi Pyroclasms the board. Her beefier bodies emerge unscathed, and I’m defenseless and they hammer in for 8. Down to 4, I summon a Kor Cartographer and pass. Jimi clinches the match when she kills it with a Volcanic Hammer, paving the way for an alpha strike.

I lead off on the decider with a Steppe Lynx, then attack for 2 with it next turn when I hit landfall. I then add a Fledgling Griffin and pass. Jimi, meanwhile, is just developing her manabase.

Now turn 3, an Evolving Wilds cracked for a Plains lets me attack with both for 6, taking Jimi to 12. It’s a solid advantage, but not one that a Pyroclasm can’t stop as Jimi simply resets the board. Next turn I rebuild with a Snapping Creeper, while Jimi lands a Canyon Minotaur.

Now turn 5, I summon another Fledgling Griffin and end my turn, while Jimi simply plays a Mountain. Right back to me, I find a Plains with a Kor Cartographer, triggering landfall on the Griffin and giving it flying. It soars right above Jimi’s Minotaur and hits in for 2. Back to Jimi, she counterattacks for 3, then blasts me with a Lava Axe to leave me at 12.

A turn-7 counterattack for 6 puts Jimi at 4, after which I summon a Territorial Baloth. Although Jimi’s able to kill the Baloth with a Blaze, she’s been outraced and knows it. She scoops, showing me her frustrating hand of a pair of Ember Shots.

Although not without some rather frustrating faults, Heart of Worlds was a lot of fun for us to play. Although I’d picked the game up with Alpha, after a very long break we all came into it during Zendikar. Landfall, then, has a substantial nostalgia factor for the Lament crew, and having an entire deck devoted to it was a delight- not least because of Zendikar block’s own deficiencies.

After a long and successful run, the Theme Decks were eased out to pasture after the conclusion of Shadowmoor block. With the advent of Shards of Alara in 2008, the Intro Pack was introduced to replace it. Geared towards the novice player, the early run of decks tended to revolve less around an actual “theme” than their predecessors did, instead being a deck that spotlighted different aspects of those particular colours. That’s not to say that they were absent a theme, but it tended to be one element amongst others rather than the defining core of the deck.

This was less noticeable in Shards of Alara block. As a “colour matters” set, the restriction of colours for each deck- along with each shard’s mechanic- essentially was the theme. When Zendikar rolled around, though, the contrast became a bit more apparent. Kor Armory, Rise of the Vampires, and The Adventurers are all tribe-based, centering on Kor, Vampires, and Allies respectively, leaving two. While Unstable Terrain did carry landfall, with Pumped Up focusing on kicker, these had a more integrated approach, where the mechanic was loosely integrated. Consider Unstable Terrain. With about 20% of the deck given to landfall cards, you couldn’t play the deck without having some interaction with the mechanic. Thanks to a deck makeup that was largely singleton, your play experience would vary widely even around that theme.

By contrast, Heart of Worlds takes a much more driven, focused approach to landfall. Almost one-third of its cards feature the ability, a steep increase. Every creature that doesn’t have landfall is there to support landfall, finding land out of the deck- no Coral Merfolk here! Unstable Terrain was not derelict in this duty either, but its options were far clunkier (see: Merfolk Wayfinder, Frontier Guide). In short, Heart of Worlds is everything Unstable Terrain could have been, had it been constructed as a Theme Deck instead of an Intro Pack.

In terms of playability, Heart of Worlds did very well, though it did have some vulnerabilities. The problem we saw was that it tended to act like a weenie deck, fielding lots of smaller creatures, but wasn’t priced aggressively enough to own the early game- while being overpriced for the late game. If your deck is optimised for the early game, you want a flood of cheap creatures bashing in for damage. A turn-1 Steppe Lynx is as good as it gets here, and it’s a superb card that really needed a fourth copy. The Fledgling Griffin is another solid contender here, and thankfully you do get a playeset of these. However, once you start hitting the midgame where your landfall enablers come on-line, you’re starting to lose out on efficiency. Sure that Kor Cartographer just fetched you a Plains to make your Lynx a 2/3 and your Griffin gain flying, but you also just paid four mana for a 2/2. Or three for a 1/1, in the case of the Farhaven Elf or Pilgrim’s Eye. These weaker bodies are great at keeping up landfall, but less useful for anything else. So while the deck can race ahead early on, it can quickly fall behind- even moreso if you’re missing your landfall triggers.

The deck fields two larger threats which can help recover ground in the later game, the Territorial Baloth and the Emeria Angel. What the deck really wanted, though, was the Baloth Woodcrasher. For only one more mana than the Territorial Baloth, you get an 8/8 with trample instead of a 6/6 each time a land is played. Drop and crack an Evolving Wilds, and it’s 12/12 versus 8/8. This better gives the deck some explosive power to compensate for the flagging midgame, and the extra mana cost is perfectly reasonable in a deck that has so much focus on getting you extra land. Too often we’d find this deck getting out ahead early, only to start losing ground that it never got back. Still, it’s great fun, and a superb showcase of its particular mechanic.

Hits: Excellent use of the landfall mechanic gives the deck an unmistakable identity; landfall is a fun mechanic that never quite seemed to get its due; very strong supporting suite to help you hit your land drops

Misses: Removal package is a bit poor (no Journeys to Nowhere?); aside from the utility they provide, the deck’s lend-fetchers are overpriced weenies that offer little impact to the battlefield otherwise; needed a stronger finisher to gain back initiative in the endgame