It’s our first run-out with Mercadian Masques decks as Sam readies herself to challenge Disrupter with the Red/Green Deepwood Menace. For a set long derided for its percieved ‘lack of mechanics,’ will the decks offer something new?

I’m on the play for our opener, and lead with a Subterranean Hanger while Sam opens with a Forest. Next turn I add a Mountain and a storage counter to the Hangar, while Sam finds the game’s first creature with a Vine Trellis.

Now turn 3, I blast Sam’s Mountain with a Rain of Tears, using up the Hangar’s storage counter. She replaces it with a Forest, adding a second Vine Trellis. Back to me, I add a counter to the Hangar, then play a Bog Witch. Sam matches it with a Cinder Elemental.

I lash out at Sam’s hand on turn 5 with a Specter’s Wail, whittling away another Vine Trellis. Adding a second counter to the Hangar, I end the turn. Sam attacks for first blood with the Elemental for 2, then adds Shock Troops. Back to me, I add another counter to the Hangar and end the turn. Sam’s go isn’t much fancier- a 4-point attack from her army, and her turn passes without play.

Now turn 7, again I trigger the Hangar and pass. Sam sends in the troops for 4 more damage, but I Snuff Out the Shock Troops. As expected, Sam pops them in response to blast me for 2. I don’t love burning good removal on them, but I need them off the board. In revenge, Sam plays a Volcanic Wind to the face, leaving me close to death at 6 life. I claw a little of it back when I Sever Soul on her Elemental, going up to 8. This gives me some breathing room, and Sam’s next turn is a blank.

A turn-9 Molting Harpy gives me a creature presence, while I Stone Rain one of Sam’s Mountains. Sam draws, then passes. After paying two mana for the Harpy, I tap the Subterranean Hanger for 1 to play Larceny before attacking in. This takes Sam to 18, and she pitches a Revive from her hand. Back to Sam, she then uses her Trellises to help play Natural Affinity, taking advantage of my being tapped out.  She swings in for 8, and I chump one of her attacking lands with the Bog Witch.

Now turn 11, I counterattack for 2 with the Harpy in the air, forcing Sam to discard. I then play a Cinder Elemental of my own (which is why I was so concerned with her Shock Troops earlier). Back to Sam, she kills it- and me- with a well-placed Lunge.

After swapping land drops for a couple of turns, I lead turn 3 with an Alley Grifters. Next turn, after attacking in for 2 I add an Enslaved Horror, a nice, early play that conveniently sidesteps the card’s drawback. Sam finally finds some legs beneath a Squallmonger.

Now turn 5, I use a Dark Ritual to power out a Larceny, then cast Specter’s Wail to pluck a Squallmonger from Sam’s hand. I then attack in with the Horror for 4, taking Sam to 14 life and forcing another discard (this time, a Forest). Back to Sam, she counterattacks for 3 with her creature, then adds a Deepwood Tantiv. 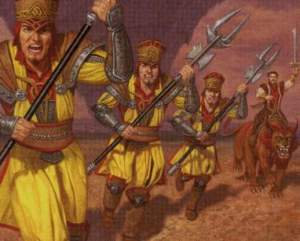 I attack in on turn 6 with both beaters. Sam blocks the Grifters with her Tantiv, taking 4 off the Horror. This sees two more of her cards plucked from hand, straight to the graveyard. I then finish off the injured Tantiv with a Maggot Therapy, and end a very productive turn. Back to Sam, she attacks for 3 more with the Squallmonger, then adds a Horned Troll before passing. I then attack for 4 with the Horror, which Sam absorbs with her Troll before regenerating it. I then summon a Wall of Distortion. For Sam’s part, she attacks in for 3 more with the Squallmonger, putting me to 11.

Now turn 8, I activate the Wall to force Sam to discard the last card in her hand. It’s a Thunderclap, and she chooses to play it in response to kill the offending Wall. Back to Sam, she draws and plays a Forest, then passes. Back to me, I play a Silent Assassin. Sam draws a card, then passes the turn.

Now turn 10, I summon  a Bog Witch before ending my turn. Sam finds a Desert Twister, using it to kill my Enslaved Horror. She then attacks for 5 behind her Squallmonger and Troll, leaving me at 6 life. Back to me, I attack in for 2 with the Grifters, forcing the discard of Natural Affinity. At 8 life, Sam counterattacks for another 5, forcing me to chump with the Bog Witch to reduce the incoming damage to 2. Sam then adds a Cinder Elemental, which I must draw an answer for or lose the game. Alas, I don’t find one, and Sam is victorious. All told, having not played a single Mountain all game I don’t suppose I can complain too much.

On the play, I lead with a Subterranean Hangar, which Sam meets with a Forest. Next turn I play a Swamp and add a storage counter to the Hangar, while Sam finds the game’s first creature in the form of a Deepwood Drummer.

Now turn 3, I use the Hangar to fuel a Rain of Tears on Sam’s Mountain. She attacks for 1 with the Drummer, then adds a Vine Trellis before ending her turn. Next turn, I replace my storage counter on the Hangar, then summon a Bog Witch. Sam matches with a Squallmonger.

A turn-5 Specter’s Wail hits paydirt, plucking a Volcanic Wind from Sam’s hand. Sam returns fire with her Squallmonger and Drummer, carving me up for another 4. She then adds another Deepwood Drummer before ending her turn. Next turn, I drain my Subterranean Hangar to fund a Henge Guardian. Sam answers with a Vine Trellis.

Now turn 7, I play a Swamp, charge the Hangar, and pass. Sam attacks with her Squallmonger alone, and I confidently block with the Guardian. As expected, Sam then activates a Drummer by discarding a Forest, giving her Squallmonger a boost. Having baited out the extra card, I then happily Snuff Out the Squallmonger. Next turn, I summon an Ogre Taskmaster, while Sam adds a Deepwood Tantiv.

Now turn 9, I then bring out a Silent Assassin, attacking in for 7 with my Taskmaster and Guardian. Sam takes it on the chin, going down to 13. She counterattacks for 2 with the Tantiv, leaving us even on life. Next turn I attack in again with the Taskmaster/Guardian duo, and Sam’s now down to 6. She adds a Vine Trellis after another Tantiv attack.

I continue the offensive pressure on turn 11, and Sam pitches a card to a Drummer to make the other Drummer a 3/3, shoving it in front of the Taskmaster for a trade. Instead, I simply Vendetta it to keep my Ogre alive. The Guardian runs into the Trellis, so the only one losing any life this turn is me. It’s far from a loss, though, as I activate the Silent Assassin to kill her Trellis. For Sam’s part, she plays Shock Troops after a Tantiv strike, and again we’re level on life at 6 apiece.

Now turn 12, I Stone Rain one of Sam’s two Mountains, then attack for another 7. Sam blocks the Taskmaster with her Troops, and the Guardian with her Trellis. She then pops the Troops to kill my Assassin, but I respond with a Dark Ritual to fuel the Assassin’s ability for one last use, targeting the Trellis. Again Sam escapes damage, but sees her board position eroded. I then put her on a clock with a Molting Harpy. Sam draws and passes, though at the end of turn I sacrifice a Mountain to fuel a Thunderclap, killing Sam’s other Deepwood Drummer.

Next turn, I pay the tax on the Harpy, then attack in for 9. Sam’s Tantiv blocks the Guardian, while her last Trellis chumps the Ogre. I then use Lunge to kill off the wounded Tantiv, striking Sam for 2 in the bargain. Down to 2 life and unable to answer my threats, Sam concedes the game and match after the next draw.

Although we’ve been at the precon racket for a couple of years now, I wouldn’t say that we’ve become jaded to the format. It would, however, be fair to say that there are some sets we look forward to reviewing more than others. This may not me a surprise to many, but Mercadian Masques was around the bottom of the list. Individual cards from the set never really impressed me when I looked back at them, and as a much in love as I was with the Weatherlight Saga, I thought it more or less went downhill from Exodus. Back in April of last year during Avacyn Restored, we put up a ‘Thoughtsieze’ poll on the site asking readers what set they wanted to see reviewed next out of six possible choices. On top was Lorwyn, with nearly 30% of the vote. Bringing up the rear with less than 10%? That’s right, Masques.

And so it was that in breaking the decks down for the reviews, I began to be a little intrigued. With one exception, these weren’t bad decks at all, and in fact they seemed to defy expectation. The proof, though, is in the playing, and I was excited to get behind Disrupter. In full fairness, this deck hits upon some of my all-time favourite archetypes, namely discard and land destruction. And quite delightfully (and despite results to the contrary), it does so rather well, while being a terrific bit of fun to play.

For one thing, the disruption package was consistent enough to make an impact on each of the games. Time and again I was able to rubbish Sam’s hand or keep her mana off-balance, harassing and harrying her resources. Although I never felt happy maintaining card parity in using Specter’s Wails, preferring two offset the mana payment by going up in card advantage (a la Mind Rot), it was cheap enough that I could cast it without taking up the bulk of my turn in the midgame, while being cheap enough to option early and help me curve out if I needed it. And the landkill seemed just enough to do what was needed, without flooding the deck with them. The burn and removal were spot-on as well.

Of course, all that comes with a cost, and Disrupter’s weakness is in its creatures, which are a wide and varied lot. Although I was able to exert some pressure with the Henge Guardian and friends, what the deck really wanted to complement its strategy in the red zone was evasive threats. It was too easy to run out of gas here, as a lot of the creatures don’t give a lot of body for the buck. Still, for what it’s designed to do it does it fairly well, and we’re excited to see if the rest of the set lives up to this impressive first performance.

Hits: Lives up to the name with a very good disruption plan, consisting of discard, land destruction, burn, and removal; well- balanced for consistency

Misses: Creatures a bit on the fragile or smaller side, making it difficult to take full advantage of the roadblocks thrown in an opponent’s path. It needed either more closing muscle, or better evasive threats