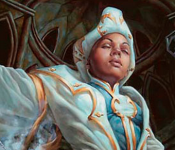 After the initial release of the Event Decks with Mirrodin Besieged, the design of the product moved towards mono-coloured decks. After all, if the idea was to build a budget-conscious deck that had a limited card framework (read: limited rares and no mythics), then swift aggro was a perfectly viable avenue to take. Both New Phyrexia as well as Magic 2012 turned in single-colour offerings, but to continuously offer a rotating stable of such decks would surely doom the product to monotonous predictability.

This fact clearly was not lost on Wizards, and with Innistrad they stuck their colours to the mast and raised them high. For the first time, we’d have available a three-colour Event Deck, Deathfed. This was, admittedly, a bit of an oversell- in reality, Deathfed was a Blue/Green construction that splashed a trio of Swamps in order to flashback Spider Spawning and Forbidden Alchemy– but it was a welcome sign that Wizards wasn’t afraid to mix up the archetypes a bit and present something outside of what had been threatening to become the norm. When the next set brought the Birthing Pod-fueled Spiraling Doom, it all but made it official.

Humanity’s Vengeance actually appears to strike a middle ground. Although it’s Blue/White, it’s not cut from the same cloth most folks normally attribute with that colour (control). Instead, it employs a number of cheap-to-midrange bodies and looks to win the old-fashined way, through the red zone. Add a generous dollop of Phyrexian mana and a pinch of soulbond, and simmer to taste. 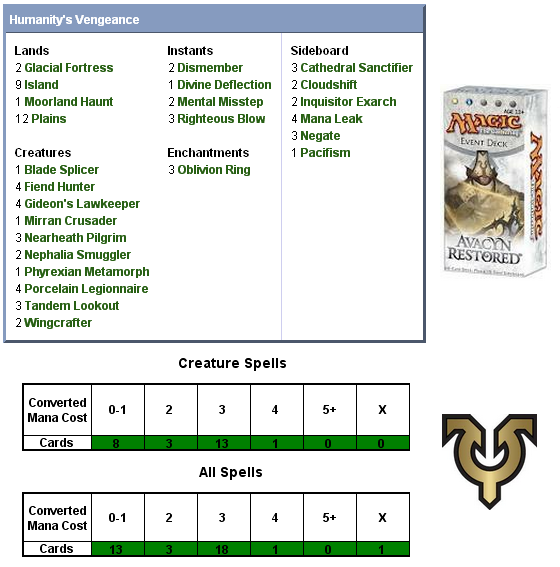 The deck’s one-drops are more or less stage-setters that lay the foundation for the rest of the deck. A playset of Gideon’s Lawkeepers are there to both clear the path for your beaters through the red one, as well as to lock down any significant opposing threats (such as a Titan, for instance). A pair of Wingcrafters with the new soulbond mechanic are an easy way to give one of your creatures evasion, while twin Nephalia Smugglers are the jokers of the deck. A number of the deck’s creatures have enters-the-battlefield abilities or triggers, and the Smuggler gives the deck the versatility to abuse that fact.

The deck’s two-drop slot is fairly threadbare, consisting solely of a trio of Nearheath Pilgrims. Unlike the Wingcrafters, the ability that these convey is somewhat marginal- lifelink. Lifegain generally has a fairly narrow band of utility, being most effective against burn decks, while it’s of much less usefulness otherwise. Add to that the fact that the Pilgrim is rather brittle, and you’ve got a marginal player in the deck that’s taking up valuable space on the bench. Even if you hold the Pilgrim back and only attack with his partner, that’s a creature doing next to nothing for you on its own. In fairness, given the abundance of Phyrexian mana cards in the deck, the Pilgrim can be seen as an attempt to get a bit more mileage out of them by giving you more resources (life) to cast them with. This was similar to the strategy we saw in Life for Death, the Intro Pack that featured the Phyrexian mana mechanic.

This sorry state of affairs is well remedied as we find the bulk of the deck’s creatures in the three-drop slot. For one thing, we get a full playset of the Porcelain Legionnaires, very strong and aggressively-minded creatures. With the ability to deploy them early on turn 2, you’ll always be happy to see them arrive in your opening hand. The same also goes for the playset of Fiend Hunters, which offer high value as being removal-on-a-stick. The 1/3 body they leave behind isn’t world class, but it can still absorb some damage, add in on an attack, and give weenie-filled aggro decks in particular a bit of trouble.

From there we have the Tandem Lookout, another soulbond creature that offers some card advantage of its own. Played before an attack on something either evasive or undesirable to block, it can replace itself in your hand with a single attack and- with hope- build from there. Finally, there’s a pair of rars in the  form of the Blade Splicer and Mirran Crusader. The Splicer is an interesting inclusion. Offering 4 power over two bodies, it’s a solid enough value, but when deployed in combination with a Nephalia Smuggler it can become a Golem-generating machine. There aren’t enough copies of either to reliably depend upon it, but it does illustrate the role the Smuggler will be looking to play in the deck. The Crusader, on the other hand, is just a hefty beater with a couple of useful protections. It, too, has a preferred combo partner, for when paired with the Lookout it can draw you two cards an attack all on its own.

The deck’s final creature is a single Phyrexian Metamorph. The Metamorph is something of a “Swiss Army” creature, able to do a little bit of everything. It can duplicate the best creature or artifact on the board, and kill off the occasional legend you might run into by entering as a copy of it (see: Thrun, the Last Troll).

A Symbol and Hope

Satisfyingly, the noncreature support package of Humanity’s Vengeance is almost entirely devoted to removal, above and beyond the quartet of Fiend Hunters amongst your creature suite. A trio of Righteous Blows deal a Shock’s worth of damage to a combatant creature, while Oblivion Ring simply exiles it altogether. The Ring isn’t limited to just creatures, either, and is your best answer to opposing planeswalkers. A Divine Deflection– another rare- is a curveball selection, filling the role of martyrdom shenanigans that’s been a staple of White since Alpha’s Reverse Damage. In this case, it’s a martyrdom with a bit of punch, as it can send that damage to the other side of the table.

The ace up the sleeve here is a pair of Dismembers. Entirely uncastable outwith a loss of life, the two of these alone with occasionally make you grateful for the Nearheath Pilgrim’s inclusion. They won’t come cheaply, but they can solve just about any threat you might be under.

The final two cards are a splash of countermagic in the form of Mental Missteps. Although extremely narrow in scope, their low cost can help give you some threat avoidance while not rendering you afraid to tie up your mana through casting other spells.

Interestingly, the deck also devotes three of its rare slots to nonbasic lands. It offers some mana fixing with a couple of Glacial Fortresses, a card you’d expect to see here. There’s also a Moorland Haunt as a way to convert your dead creatures into living ones.

Of course, there will come times where you’ll happily wish you could do a bit more to prevent your opponent from playing their best cards. In such circumstances, you’ll no doubt be pleased at the full complement of counters available to you in the sideboard. With a full playset of Mana Leaks and a trio of Negates, you can adjust the mix to suit whatever it is you’re up against.

The lifegain option takes on added significance with a further five cards in the sideboard. Whether needed to outrace aggro/burn or simply ensure delivery of your Phyrexian mana spells against an deck that consistently dish out an uncomfortable amount of damage, you get a trio of Cathedral Sanctifiers alongside a pair of Inquisitor Exarchs. The latter can be particularly useful as they’re also able to dish out some hurt to your opponent.

Finally, there’s one more piece of removal here in the form of a Pacifism, and a pair of Cloudshifts round out the deck. The Cloudshifts are an interesting spell with a lot of options for last-minute trickery with soulbond, but fall a bit flat here. The types of creatures you’d best use with this sort of effect are ones that pump power, like the Druid’s Familiar. The soulbond offerings in this deck don’t lend themselves especially well to last-minute shenanigans, outside of perhaps finding an alternate route to a card with the Tandem Lookout. As such, they’re really not a serious contender for usage.

Overall, we’re not nearly as enthused with this deck as we were with Death’s Encroach as it seems to be a bit less focused, but we’re more than willing to give it a chance on the battlefield before rendering final judgment. Certainly, the abundance of removal will make for an interesting game! In our next piece, we’ll deliver a battlefield report from the perspective of the Black deck, before concluding our Avacyn Restored reviews with a rating for this one. See you then!