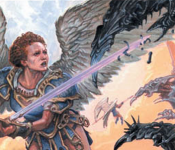 When you think of colours in Magic that seem to have a natural synergy together, White and Green tend to make the shortlist. In Ravnica, this colour pairing would be given the name ‘Selesnya,’ and a guild tailored to build upon both their strengths. Even as recently as Innistrad, we’d find Repel the Dark, a tribal deck representing the beleagured Humans circling the wagons against the creatures of the night.

When these two forces come together, they tend to complement one another quite well. White has small, efficient creatures, while Green both brings the fat. White has spot removal, Green offers mana acceleration. Naturally, both have some surprises in store for creature combat. Notably, there’s a tendency for White to take on the supporting role here, with Green’s ability to draw upon massive beaters putting it squarely in the driver’s seat.

The first-ever Selesnya deck was Tempest’s The Swarm. As we saw in the review, it was by far the most creature-dependent of any deck in the set with just over 70% of its nonland cards being ones that turn sideways to attack. With preconstructed Magic having little to fear from Wrath of God and other such effects, overpowering your opponent with a flood of beaters is a perfectly viable strategy that has little to fear from sweepers (though it’s not to say they’re unheard of). Fans of the archetype didn’t have long to wait, as the following block’s Urza’s Legacy would bring us Crusher. Crusher kept a similar approach of beats-n-backup, but toned down the creature component. This time, just over half of the nonland deck were creatures, though it kept the same dominant Green angle with only the Mother of Runes representing White. The archetype would then take a full block off, going onto mothballs for all of Masques block. It would make its return with today’s deck, Heavy Duty, once Invasion launched in October of 2000.

Heavy Duty resurrected the creature-mob mentality, and pushed it even further. In that regard, it- not Crusher- can best be seen as the spiritual heir of The Swarm. With all of only eight noncreature spells, it yet manages to take a more equitable approach towards letting both colours get in their licks in the red zone. The story of White here becomes the story of third-time-lucky, as it takes on a more involved role in the deck’s strategy. 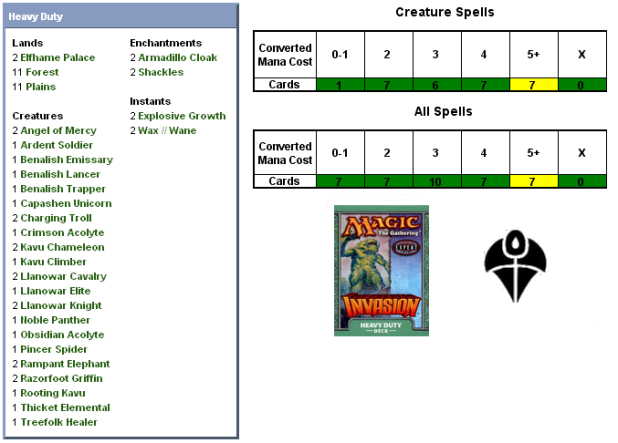 As evident from the deck list, Heavy Duty has a fairly diverse creature allotment, with a lot of singletons and pairs throughout. Indeed, taken as a whole, Invasion would have the highest U/60 (unique-cards-per-60) count of any block prior to the introduction of the Intro Pack with Shards of Alara in 2008. It says something that Heavy Duty can only boast that its the third-highest U/60 in the set at 25.00, with Dismissal (28.00) and Blowout (26.00) edging it out for top honours. While this makes for diverse gameplay experiences (the reason why Duel Decks are so packed with one-of’s), it can hinder the deck’s competitive playability by rendering its pilot less able to predict and rely upon what the next draw could bring.

That aside, you can predict with certainty that Heavy Duty brings one thing to the table: pain, and plenty of it. Optimised for the mid-to-late game, you do have to endure some early buildup, but once you’ve managed to get your manabase in order you can churn out some truly robust beaters that your opponent must solve or die.

Opening as your single one-drop is the Llanowar Elite. A 1/1 trampler, you’ll only ever cast this as-is if you are in dire need of a chump-blocker, in which case the game is already all but lost. Instead, look at the Elite as a late-game play thanks to its (admittedly pricey) kicker cost, which turns it into a 6/6.

It’s at the two-drop slot that we start to see the deck blossom and lay a foundation for aggression. A Benalish Trapper is virtually de rigeur for combat decks, allowing you to nullify your opponent’s best attacker or defender, as needed. As you may recall, this card’s functional predecessor- the Master Decoy– was found in The Swarm. The Capashen Unicorn is a Disenchant on a stick, while the Ardent Soldier is another smaller body that can bulk up with kicker. The Solider is an interesting card, not especially sexy in either its kicked or un-kicked form, but like most of its ilk is one you’ll want to play kicked whenever feasible- a 3 toughness blocks more than you might think.

Finally, the two-drop slot is home to a generous suite of colour-hosers. We’ve never been fond of the protection mechanic in preconstructed Magic, since it whiffs when not playing a targeted colour and can drain some of the fun out of games for your opponent when they are. Still, carrying one each of the Crimson and Obsidian Acolyte helps bestow some measure of security against two of the most removal-heavy colours, and a pair of gold-border Llanowar Knights help drive the point home against Black.

The multicolour shenanigans continue in the three-drops. The Noble Panther is a sizable body that can gain first strike on the cheap. Your Llanowar Cavalry is a Green creature which gains vigiliance for

, while the Benalish Emissary is a White one which can destroy a land for a kicker cost of

. Although a defensive-minded 1/4 Wizard might not be what you’d like to see on the battlefield for five mana, it’s a great situational ability since you can use it when your opponent is suffering a fragile manabase, and ignore it when they’ve got a solid start. For more mono-coloured fare, you have a Benalish Lancer, a slightly-overcosted 2/2 that can become a heavily-overcosted 4/4. Still, you have to play for flexibility in this world (which is why everything costs more in a convenience store), and the Lancer earned a place on the bench for Duel Decks: Knights vs Dragons. Then there’s the Pincer Spider (quick, spot the Coalition symbol hidden in the art!), another creature which can get a modest +1/+1 counter for a kicker cost.

The four-drop slot is just as packed. The Razorfoot Griffin– brought back as recently as Magic 2010- gives you some presence in the skies, however limited, while the Rampant Elephant is the same size for cost but instead of flying has a built-in pinpointable Lure effect. This is especially useful if you don’t get a breakthrough on your opponent’s defenses, as it can pull defenders to it like a magnet and allow your other troops to swing in unopposed (likely mourning the Elephant as they do). You also have a Charging Troll, one of the best-in-slot. A robust 3/3 with both vigilance and regeneration, the card was a rather nettling inclusion in Duel Decks: Phyrexia vs the Coalition. Finally, there’s a Rooting Kavu, a reasonably-efficient creature for its time with an unusual ability to reset your library. There aren’t a lot of compelling arguments for doing so most games, as the increase of spell-to-land ratio in your deck won’t significantly improve your draw quality, but then there’s no harm in doing so either.

In the five-and-up class, we find no shortage of finishers to give Heavy Duty its name. The Kavu Chameleon– besides being an earworm trigger for Culture Club– are uncounterable 4/4’s that can colour-swap nearly at-will. With Dismissal being the only deck with countermagic- and not the best countermagic at that- you’ll find the uncounterability mere window dressing, but changing colours can mean quite a bit in the colour-matters environment of Invasion. Meanwhile, your meager air force welcomes a pair of Angels of Mercy, and the Kavu Climber is right on the money for cost-effectiveness, given that the usual cost for a cantrip effect is

. You also have some damage prevention with the Treefolk Healer, and possible card advantage with the Thicket Elemental. Unfortunately, Green and White don’t tend to dabble much in library manipulation, so getting the Elemental to go off is purely a matter of luck. Still, the results can be quite spectacular, even stealing the occasional game.

It Could Be Worse

As discussed above, having so much space devoted to stables leaves little left over for a tack room, but you still get a solid enough complement of noncreature support to augment your troops. A pair of Shackles gives you some recourse to removal, and offers some compensation for its low quantity by being reusable. A pair of Armadillo Cloaks are a solid value for mana if you overlook the inherent card disadvantage of auras.

As you’d expect, there’s also a healthy dollop of pump effects. A pair of Explosive Growths grow with you thanks to their kicker, and another pair of Wax // Wanes give you further recourse to more combat trickery. Of course, if your opponent happens to be running a particularly nettlesome enchantment (and each Invasion Theme Deck runs a few), you can solve it with Wane instead. As with the other decks, there’s a smidgen of nonbasic land support here in the form of two Elfhame Palaces, but aside from that you’re more or less on your own.

If there’s a weakness here, it’s found where it often is in the mana curve- this is a very expensive deck, counting both the visible curve as well as the invisible one when you cast with kickers. Still, we’ll want to take it into the arena to get a full and proper accounting of its strengths and weaknesses, and will report back in two days with our results!