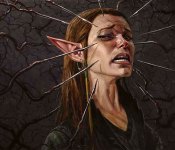 I’m on the play for our match opener, and lead with a turn-1 Putrid Imp. Sam starts with a Mogg Fanatic. Next turn I drop an Ebon Stronghold, then pitch a Sphinx of the Steel Wind to the graveyard to give my Imp flying. I send it in for 1 in the air, then set my life counter to 12 as I Reanimate the Sphinx. Sam wordlessly trots out a Jackal Pup and Mogg Fanatic- truly paling by comparison- and ends her turn.

Now turn 3, I discard an Inkwell Leviathan to give the Imp evasion again, sending both in for 7. The Sphinx’s lifelink puts me back up to 18, while Sam is now at 13. Sam’s had enough and pops her Fanatic to pick off the Imp. Fine with me, for it’s done it’s job as I cast Diabolic Servitude to return the Leviathan to play. 13 power on the board, and this is turn 3. Sam plays a Mountain and passes.

Next turn I swing with both beaters, with Sam chumping her remaining Fanatic to stay alive at 1. She draws, then scoops.

Somewhat shellshocked, Sam begins the second game with a Mogg Fanatic. I play Cabal Therapy, targeting myself and naming “Blazing Archon.” What luck, I have one in hand- what are the odds- and off it goes to the graveyard. Next turn Sam gets in some early damage with a Spark Elemental, sending it in alongside her Fanatic for 4 after playing a Barbarian Ring. Back to me, I bring the Archon back with an Animate Dead. 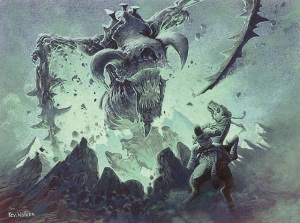 In the absence of removal, that’s more or less game in five turns- Sam lacks flyers, but fortunately for her she does have recourse to burn. On turn 5, she makes her move, frying the Archon with a pair of Lightning Bolts and attacking for 6 thanks to a freshly-played Teetering Peaks. Now at 10 life, I play another Animate Dead and bring back the Archon. Next turn Sam adds a Boggart Ram-Gang, but can’t do anything with her beaters. I chunk in for another 4, leaving her at 7 (she’d used her Barbarian Ring last turn, nicking her for one).

Now turn 7, Sam plays a Cinder Pyromancer. I bring out the trusty Putrid Imp, pitching a Crosis, the Purger, then bringing the Dragon back from the grave with a Diabolic Servitude. Back to Sam, she pings me with the Pyromancer for 1, pops her Mogg Fanatic for another, plays Keldon Marauders to nick me for a third which allows her to untap and retrigger her Pyromancer for a fourth point of damage, then having managed to bring me down to 6 life she concedes the game.

An opening Spark Elemental gets Sam off to the right start, attacking for 3 before I’ve even drawn my first card. As it happens, the first card I draw is an Entomb, and off I go to the library. Every target is tempting, but while I feel some pity for Sam’s predicament I’ve got a game to win, and that means that protection from Red Sphinx of the Steel Wind. Next turn Sam plays the Keldon Marauders, pinging me for 1. Back to me, I cast Exhume, which allows both Sam and I to take the sole creature in each of our graveyards and put it into play. Of course, unlike the Sphix, Sam’s Elemental has an end-step death trigger, so she ends up gaining nothing from the spell.

Now turn 3, Sam resigns herself to a Jackal Pup before passing. I play an Ebon Stronghold, then swing for 6 to put Sam at 14 and me at 22. Next turn sees Sam’s Marauders vanish, pinging me for another. I follow that up with a Buried Alive, pitching Crosis, a Verdant Force, and the Inkwell Leviathan to the graveyard before attacking again.

While Sam’s turn 5 is a blank, I swing with the Sphinx for 6 leaving Sam on the verge of death at 2 life. Meanwhile, I’m up to 34. I then finish her off with a 2-point Sickening Dreams, pitching a Terastodon and Blazing Archon to pay for it.

“You only had to Dream me for 1,” Sam says as she begins to scoop up her cards.”

“The Jackal Pup would have killed me.” I kick myself for not catching this cruelly clever death sentence, but perhaps Graveborn has twisted the knife enough.

When Graveborn was first announced, I didn’t have the highest of hopes. Sure, reanimation can be a powerful strategy, but going on the power level of Slivers or Fire & Lightning I expected the deck to have a somewhat measured take on the strategy with mediocre cards mixed in with some solid ones. I certainly was not expecting games set on the winning path as early as turn 2.

To be fair, the Sphinx was an absolute house against Sam’s mono-Red deck, but then again nearly any one of the fatties packed into Graveborn was up to the task. Even when Sam managed to burn one out (one-for-two’ing herself in the process), my next recursion spell was already well in hand. Indeed, I always seemed to have the recursion- what felt a little less reliable was the ability to get cards into my graveyard. 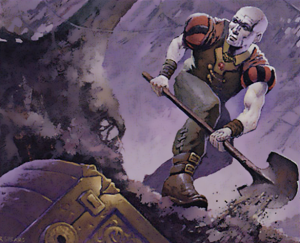 As you might note from the fact that I started on the play in Game One, I did lose our pre-match friendly when I kept a hand that had bombs and recursion, but never found a way to get them into the graveyard. It says something about the deck’s strength that I concluded that starting on the draw and skipping a land drop to force a discard was a viable tactic, though by that point in the friendly we were already well underway. Unable to cheat out a beater, I fell in just a few turns after some early attacks and 10 points’ worth of burn to the face in a single turn. Fire & Lightning is no slouch, however it may appear so next to Graveborn.

Overall, the deck works and works well, and it gives me some enthusiasm about the product line as each release has exceeded the one before it. Although we’re well accustomed to preconstructed decks that have a loose support for its strategy, the tight focus of Graveborn exceeds that of some of the Event Decks, which are themselves at the top of the preconstructed class. As noted in the deck analysis, there’s little wasted space here. When looking to blunt your opponent’s creature-based assault, for instance, you’re not just playing a removal card. You’re either getting a body along with it (Faceless Butcher) or dropping some of your bombs into the graveyard where they belong (Sickening Dreams). It’s not perfect- Zombie Infestation doesn’t feel quite in the same league as the other discard options presented here, and is contingent upon cards in hand, but it’s as tightly coiled a preconstructed deck as we’ve seen.

Still, technical ability is but one part of the equation- is the deck fun? The answer here is a resounding yes! Even players (like myself) who tend to dislike creature combat will take sadistic glee in seeing the look on opponents’ faces when they see their doom land on the battlefield on turn 2. There was certainly the sense in the match above that Graveborn was a cut above, and the minigame of throw-things-out-then-bring-them-back was a blast to play.

Then there’s the actual appearance of the deck. We’re not typically ones who have much interest in foils, but the cards of Graveborn are gorgeous. They feel slightly thicker and heavier than ordinary Magic cards, somehow more solid, and the foiling process makes a lot of these pop- especially ones with a lot of ‘white space’ like Buried Alive, Hidden Horror, and- most especially- Reanimate. The Ebon Stronghold is gorgeous. The box and die are nice for those who appreciate such things, and as mentioned in Part 1 of the review it was nice to see a nonstandard “Spindown” life counter colour. Overall, we have little reservation about recommending Graveborn, even at the MSRP of $34.99.

Hits: Superlative focus on the deck’s recursion engine gives you reliable delivery of outsize beaters well before you’d be able to hardcast them (if even you could); foil cards here are visually stunning

Misses: A few cards seem less ‘choice’ than others (Twisted Abomination seems to pale beside of its higher-commonality bretheren); like any strategy that devotes so much of its energy towards a single creature, can be vulnerable to removal (though ability to bring creatures back from the graveyard mitigates this somewhat)