With one of the themes of Conflux being what happens when shards collide with forces inimical to them, you could hardly ask for a better thematic matchup than Esper Air Assault versus Naya Domain. Sam took on the five-colour Naya deck to give my artifacts a run for their money, and here are the results.

Sam begins on the play, and leads off naturally enough with a Forest. I’m quite happy to play an Arcane Sanctum for my own land drop. Next turn, Sam plays a Plains, then basic landcycles a Sylvan Bounty for a Mountain- next turn she’ll have one of each. For my part, I debut the game’s first creature, a Darklit Gargoyle.

The Gargoyle, sadly, is immediately outclassed by Sam’s menacing turn-3 beater, the Woolly Thoctar– an immediate must-answer threat. Fortunately she’s caught me with an Executioner’s Capsule in hand, and down it comes after a 1-point swing in the sky. When Sam attacks as expected next turn with the Thoctar, I pop the Capsule and solve the game’s first challenge. Alas, I have little time to relax before the next one appears: Matca Rioters, immediately coming down as a 4/4 as Sam’s done a fine job of diversifying her early mana base. All I can manage by way of reply is a Rod of Ruin, but I at least shave another point off her life total with the Gargoyle.

A turn-5 Terramorphic Expanse gives Sam the perfect spread as she cracks it for a Swamp. The now-5/5 Rioters rumble through the red zone and carve off a quarter of my life total. I’ll need an answer, and soon- especially after Sam deploys a Manaforce Mace before passing. My turn 5 is a blank, though I manage an Island. Next turn Sam equips the Mace to the Rioters, thundering in for 10 damage. I shove my Gargoyle in front of them, and they pulp it to buy me some time. At the end of her turn, I ping her with the Rod, a near-meaningless gesture of defiance. I then play another expendable sucker- a Parasitic Strix– and end my turn.

Now turn 7, the Rioters run roughshod over my Strix, then Sam reinforces them in a Kranioceros. Desperate, I play a Faerie Mechanist, which fetches me an Esper Cormorants. Next turn Sam swings with both bruisers, and the Karnioceros gets through for 5. I ping her again as I’ve been doing, and Sam is now at 15 life. Back to me, I play the Cormorants, then basic landcycle a Traumatic Visions for an Island. I have both an Inkwell Leviathan and Magister Sphinx in hand, but I’m just not getting there fast enough. I run out of life the turn after I run out of chump blockers.

Again I luck into an opening Arcane Sanctum, hoping it portends more joy this time around than the last, while Sam drops a Forest. While I continue to build up my land, Sam drops a turn-2 Kaleidostone and lands another turn-3 Woolly Thoctar. As before, I have an answer in the form of an Executioner’s Capsule, which I pop to kill it when Sam swings in on turn 4. She then basic landcycles a Sylvan Bounty for a Swamp, which again gives her one of each land type. 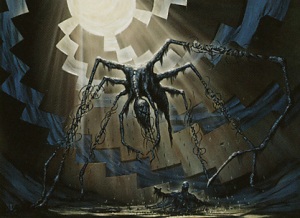 On turn 5 the game finally diverts from following in the footsteps of the one before when a Sludge Strider hits the table. Sam responds on her turn with a Spore Burst, giving her a quintet of 1/1 Saproling tokens. Next turn I add a Windwright Mage, who gains flying because of the Executioner’s Capsule in my graveyard. She also lets me trigger my Strider’s special ability, so Sam goes down to 19 life while I’m at 21. I decline to attack, and pass turn. Sam for her part plays a Kranioceros and passes.

Now turn 7, Sam exiles the Windwright Mage with a Path to Exile, which not only affords me another basic land but also lets me trigger the Strider again. I then add Vectis Agents and pass, using the Strider’s ability one more time. Over to Sam, she decides she’s given me enough time to build up, and swings with everything for 10. I block and kill a couple Saprolings with my two creatures, but still take 8 to end up at 15, two points lower than Sam.

I attack back on turn 9 for 7 with the Strider and Agents, then summon the Esper Cormorants- again triggering the Strider’s ability to syphon 1 life from Sam, leaving her at 9. I then solve the Kranioceros with a Dehydration and pass. Over to Sam, she takes a breather with a Rampant Growth and a Sylvan Bounty, the latter of which restores her to 17 life. Next turn I attack for 3 with the Cormorants, sailing right over Sam’s defenders. I then add a Parasitic Strix, which not only syphons Sam for 2 on its own as I control a Black permanent, but also triggers the Sludge Strider to symphon one more. I then add the Scornful Æther-Lich, syphoning again. By the time the turn is over, Sam’s down to 10 life, while I sit quite happily at 20. Sam’s response? An Aven Trailblazer.

On turn 11 I send in my infiltration units- the Agents and Lich- using their special abilities to ensure they’re unblockable. I also attack more conventionally with my Cormorants and Strix, and send my Strider in for good measure. It’s a backbreaking play as Sam trades her remaining Saprolings for the all-star Sludge Strider, chumps her Aven to the Cormorants, and goes down to 4 life. I end with a Court Homunculus, and Sam scoops after drawing.

Sam’s turn to lead off, and she begins with a Forest off of a Terramorphic Expanse. Next turn she grabs a Mountian by cycling out her Sylvan Bounty, and by turn 3 she’s again springing the Woolly Thoctar on me. I’ve been laying land myself, and while this time I don’t have the Executioner’s Capsule at my disposal, I do have a Remove Soul. That gives Esper Air Assault a perfect three-for-three record of solving one of Sam’s nastiest threats before it ever touches me. For my part, I basic landcycle a Traumatic Visions for a Plains, which I then play before ending my turn.

Now turn 4, Sam fetches an Island off of a second Expanse, then landcycles a second Sylvan Bounty to go get Black. If I’m impressed with Esper’s ability to take care of itself in the early game, I have to also admire the facility with which Sam has managed to get all her basic land types into play. For my part, I use the turn to bring out a Windwright Mage. Next turn, Sam summons Wandering Goblins, then she Paths my Mage at the beginning of my upkeep. I grab a Swamp with a Terramorphic Expanse of my own, then replace the Mage with a Vedalken Outlander.

Sam’s turn 6 is a blank, but mine isn’t. Another Expanse grabs me a Plains, while the Faerie Mechanist snares me an Executioner’s Capsule. I’d ordinarily like to hang onto the Capsule in hand until needed, but with only one source of Black mana in play I don’t want to risk getting caught flat-footed so I go ahead and deploy it. Next turn Sam brings out the Beacon Behemoth, while I add a Parasitic Strix after attacking for 2 with the Mechanist. That puts Sam at 16, with me up to 22.

Sam then adds a Manaforce Mace to the battlefield, then equips it with the Behemoth and attacks in. As expected, I pop the Capsule and kill it. Back to me, I swing for 4 in the sky with my flyers, then add an Esper Cormorants and a Parasitic Strix. With the Capsule gone this second Strix doesn’t grant me a 2-point syphon as I have no other Black permanents in play, but I decide that the pressure in the air is more important than a little extra life at the moment and play it anyway. Sam’s down to 12 life, while I remain unthreatened at 22.

Now turn 9, Sam equips the Mace to the Goblins, giving her 10 power on the board, but it doesn’t matter what she does at this point. Unable to stop my air force from flying over the red zone (or, in the case of the Vedalken Outlander, walking right through it), I swing in with everything for 11 points of damage, then drop and tap a Rod of Ruin for the win.

I was honestly surprised by how much I enjoyed Esper Air Assault. As we identified in the deack analysis, it had a major tactical outline of evasive aggression in the sky, aided with a subtheme or artifact synergy, and that’s exactly what it delivered. The interaction between artifacts was unreliable, but when it was there it could make a serious impact. Most notable here was the Sludge Strider, which was singlehandedly responsible in game two for a 12-point swing in our fortunes (six activations). Beyond that you had the Windwright Mage coming in with flying (though Sam never suffered her to live) and the immediate doubling of the Court Homunculus’s power level. While the deck is capable of operating just fine without it, that synergy gives it a few extra percentage points towards victory when played over multiple games- it’s slight, but all upside. This stands in welcome contrast to the more artifact-dependant Esper Artifice from Shards of Alara, which could struggle if it didn’t find the right cards for this strategy.

The major strategy- taking to the skies- was very effective. To be certain, Sam’s Naya deck was at a bit of a disadvantage, for she has few ways to solve those threats, but Esper Air Assault never needed to rely on dropping its bombs to win- indeed, it’s telling that the only game where I had drawn either one of the deck’s two rares was the game I lost. It’s certainly fair to ask if I might not have had a better outcome had I something more affordable in hand. This applies especially in the case of the ludicrous Inkwell Leviathan, a card which essentially says, “if you’ve managed to stall this long, go ahead and put the game out of its misery already.” Instead, the deck featured a steady stream of decent, affordable fliers which could put the game away, with enough removal and disruption to stall things out on the ground.

The lack of removal certainly is a concern, as you have precious little of it and must really make it count. With a single Executioner’s Capsule and Dehydration, you’ll have to find more creative ways to counter your opponent’s threats. If you’re forced to play on the defensive, the evasiveness of your air force is far less effective, and their relatively smaller size means they won’t last forever. Esper Air Assault, then, is a deck which relies heavily upon momentum. If things are going well, they’ll get better and better, but if you run into difficulties, you may have some trouble recovering.

Hits: Solid aerial theme gives your deck dependable combat presence; artifact-synergy subtheme adds to the power level of the deck without taking away from it if the right pieces aren’t assembled

Misses: Weak removal package means you’ll have little way to deal with pesky noncombatant/utility creatures; Inkwell Leviathan is a dreadful inclusion and almost as good as a dead draw most games