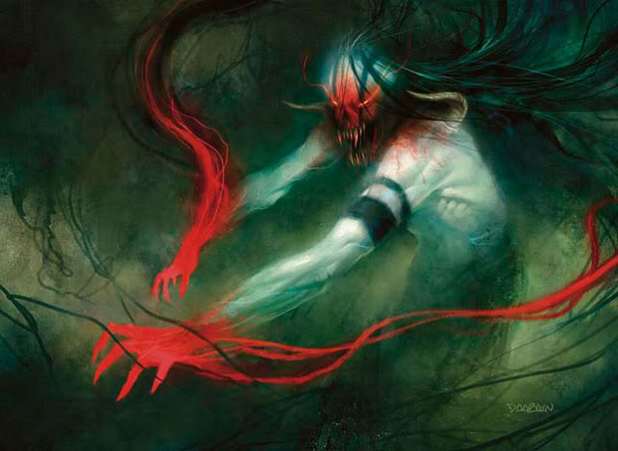 If there’s been one consistent complaint that’s been leveled at the Event Decks, it’s criticism of the value disparity. In essence, it is felt, having one deck packed with value cards and the other quite a bit thinner leads to some shenanigans with regards to pricing. A number of vendors, for exampkle, have marked Illusionary Might down $10, and increased Vampire Onslaught by a similar amount. This was not dissimilar to what happened for New Phyrexia’s round of decks, where War of Attrition’s two Stoneforge Mystics drove prices sharply upward.

In Wizards’ defense, the decks are made well in advance, and as Aaron Forsythe (head of R&D) once tweeted, the Mystics were a $4 card at the time the deck was designed. That might have been a happy accident (for some), but Vampire Onslaught is a much more deliberate case. As previously quoted, Event Deck designer Zac Hill made the case quite clear in his mothership article:

As formats get close to rotating, we’re more likely to try and get one last hurrah out of the previous block’s Constructed All-Star list, whereas earlier in a set’s lifespan we’re more likely to explore themes that have the opportunity to grow more robust with each release.

Today we’ll be looking at this ‘Constructed All-Star’ list with Vampire Onslaught. There are a number of familiar faces here from mono-Black Vampire aggro decks that have bounced around Standard, mainly as second-tier builds.

Feed Before the Sun Rises

As an aggro Vamps deck, Onslaught wastes little time in establishing board presence. As you can see, its creature curve is designed to get you moving right out of the gate, and only truly letting up once either you or your opponent is no more.

Those one-drops are critical towards a successful start. One the one hand, you have a playset of Viscera Seers, the weaker of the two. Their upside is that they reinfoce a ‘waste not, want not’ strategy, allowing you to get one last usage out of a dying creature while upping your card draw quality. Your other option is the much more aggressively-minded Vampire Lacerator, whose drawback should be negligible to those familiar with ‘suicide Black’ strategies.

The two-drop slot is the deck’s most populous, and it does much of its heavy lifting here. A quartet of Bloodthrone Vampires will often give your opponent fits when looking to assign blockers. The price might be steep (sacrificing creatures), but there’s little the Bloodthrone can’t take down. That may be horrible card advantage, but all-in strategies like this one worry less about that sort of thing so long as it enables a quick kill.

A playset of Gatekeepers of Malakir might be more realistically considered a three-drop, since there should be very few times you’ll want to summon them unkicked. An automatic two-for-one for three mana is a solid deal, even if it’s an untargeted Edict effect. The danger with Edicts is that they tempt some players to try to set up the ‘perfect kill,’ but often as not they’ll be worth your while eliminating an early blocker or even a mana creature.

A singleton Vampire Hexmage is here as anti-planeswalker insurance. Kalastria Highborn, one of the deck’s rares, is something of a combo engine that taps into the deck’s heavy vampiric synergy, and can help give your deck some reach to finish off a wounded opponent. Aggro decks are prone to stalling once your hand empties, so having a way to continue the pressure will often prove crucial. Finally, there are a pair of much-anticipated Bloodghasts, relentless beaters that have a hard time staying dead. Indeed, the Bloodghasts are the motive behind the inclusion of a Verdant Catacombs (the deck’s only nonbasic land), to give you recourse to at-will resurrection.

You’ll notice thus far every creature is either a 1/1, a 2/1, or a 2/2. That changes a little as we cross into three-drop territory with a pair of Vampire Nighthawks. From the start these have always been exceptional deals for their mana cost, and they’re a perfect fit here. They’re also your only flyers. Next is the playset of Pawns of Ulamog. No great bargain on their own- a 2/2 for three mana- they give you the ability to churn out 0/1 Eldrazi Spawn tokens every time a Vampire checks out. This is fairly underwhelming as a mana source- with a cheap, aggressive mono-coloured deck you should have few mana worries- but as you’ll see it synergises quite well with some of the deck’s themes of profit from loss.

The final creature in the deck is a trio of Vampire Outcasts, which at least have the potential to become 4/4’s thanks to their bloodthirst. Like the Gatekeepers of Malakir, you should seldom cast these unless you can optimise them, for a 2/2 for four mana here is justifiable only in desperation.

Outside of its creatures, the card selection for Vampire Onslaught is some slim pickings indeed. On the upside, there’s a playset of the scorching-hot Dismember, a Black removal spell which goes into nearly any deck. Although its price has dipped somewhat based on this reprinting (Star City Games has lopped 40% off the price), they’ve more than contributed their share of buzz to the overall deck. As the deck’s only targeted removal, you’ll have the classic aggro removal dilemma to content with in regards to using them: clear out early defenders to let your beaters get through, or save them for when something truly game-changing touches down.

The final three cards are a trio of artifacts. There’s a singleton Mimic Vat as well as a pair of Blades of the Bloodchief, all of which feeds into the deck’s combo engine. As mentioned earlier, the synergies between a number of cards adds a layer of strategy to the deck ordinarily absent in straight-beats aggro. Here’s the deck’s final curve for all spells and creatures:

While mono-Red seldom need worry about such complexity thanks to the abundant burn at their disposal, Black has few ways to directly damage an opponent. Once the red zone starts to clog up, if you can’t go overtop of it (with the Nighthawks), you’ll be left looking for either reach or breakthrough (removing a particularly difficult defender). The combo engine is fairly simple, and has a number of interchangeable parts.

Both the Bloodthrone Vampire and Kalastria Highborn give your creatures the ability to be relevant even after outclassed on the battlefield. If the Bloodthone is out, they’re dinner fodder. If you’ve only managed the Highborn, send the unfortunate expendables towards your opponent in the hopes of seeing them die, then activate the syphon. Altogether, this gives the deck an exciting set of alternate win conditions outside of simple creature beatdown, and should add to its lethality. Of course, as the old chestnut goes, no plan survives first contact with the enemy, so for games beyond the first Vampire Onslaught provides you with a fifteen-card sideboard.

Flesh is Increasingly a Liability

Fittingly, the bulk of the sideboard- like the bulk of the deck- are comprised of creatures. There are a playset of the two-for-one Skinrenders in case you need some extra removal and a few larger bodies. Two more Vampire Nighthawks will help counter an opponent with an aerial finisher like the increasingly-popular Consecrated Sphinx. Up against a deck reliant upon planeswalkers? You’re in luck- three more Vampire Hexmages wait in the wings.

If instead you need to bring in a little more targeted removal, the deck comes equipped with a pair of Go for the Throats. Finally, against other combo engines or decks leaning heavily on a specific card or two, a playset of Distresses rounds out the set.

The deck on the whole looks like a fun one to play, but of course we’ll be withholding final judgment until we’ve had a chance to get the deck into the field. Join us next time when we begin our playtests with Illusionary Might!