There can be little doubt by now that Event Decks are here to stay. With this being the third product release with more scheduled to come, the ‘gateway to competitive play’ design space has been found to be fertile, although Wizards has had to do some adjusting along the way. As expected, we’ve been treated to two different flavours of aggro deck this time around, but each deck has a little twist. The surprise here with Illusionary Might is the deck’s colour, which isn’t one ordinarily associated with its strategy.

In his excellent piece on designing the Event Decks, Zac Hill revealed an interesting rule of thumb Wizards has when crafting them.

As a general rule… we tend to prefer at least one linear, mostly aggressive strategy whose manabase can be made to work with minimal effort. The other strategy will likely be more set-specific and try to play up some interesting block themes. As formats get close to rotating, we’re more likely to try and get one last hurrah out of the previous block’s Constructed All-Star list, whereas earlier in a set’s lifespan we’re more likely to explore themes that have the opportunity to grow more robust with each release.

The Dream Does Not End

The key to Illusionary Might’s strength lies in the name, as the deck explores the power tradeoff represented in the strong-but-fragile Illusion tribe. An absolute steal for their mana cost, these creatures punch well above their weight but disappear like vapour when so much as looked at. This is fairly minor on the lower end of the cost scale- targeting a Phantasmal Bear with a Shock, for instance, would have killed it anyway. When you look at the Phantasmal Dragon, however, the tempo loss can be a bit painful. So long as you’re trading a card for a card you can at least take some comfort there- it’s when your opponent is playing something like a Cunning Sparkmage that you really have to worry.

Illusionary Might also takes full advantage of Phyrexian mana’s ability to help power out a creature even more quickly, and nearly one-third of the deck’s beaters have that characteristic. Taken together, the deck begins to feel almost Red in its philosophy of all-in high risk/high reward. The final piece of the strategic puzzle is the endgame, where the Grand Architect can help power out a few very strong closers to finish off your enemy. Let’s take a look at the creature curve and see what it tells us about the deck.

On first blush that might not seem like the most aggressive curve, coming into its on on turn 3, but bear in mind that eight of its fourteen three-drops can be cheated into play on turn 2 thanks to Phyrexian mana. Looked at from that perspective, that gives us the much more pleasing…

Indeed, the split between two- and three-drops is one of the defining characteristics of an aggro deck, because that determines what you’re going to be doing with that fourth land drop. Hitting that lets you begin to play two two-drops in a turn, whereas you’ll have to wait quite a bit longer to do that with three-drops. This curve is pleasantly aggressive. Next let’s look at the creatures within in.

The one-drop slot is solely occupied by the aforementioned Phantasmal Bears. These are creatures you should be delighted to see in your opening grip most times, because against all but the more dedicated creature decks you should be seeing immediate results. The two-drops are an interesting pair of cards, both of them bolstering the Illusion subtheme, and both of them rare. The Phantasmal Image is a variant of Clone that gives you a copy of any creature on the board, albeit one with the Illusion’s fragile drawback of being sacrificed when targeted. The upside is that it costs half as much, giving you a potentially substantial creature on the cheap. The Lord of the Unreal is the Illusion tribe’s ‘lord,’ a Wizard that not only bolsters their power and toughness, but also shields them from their tremendous vulnrability by giving them hexproof.

Next we arrive at the overloaded three-drop slot, packed with solid options. The playset of Porcelain Legionnaires are a somewhat surprising inclusion, given that we just had a playset of them included in the last pair of Event Deck’s (New Phyrexia’s War of Attrition). Obviously, their power level is quite high, and the deck doesn’t let the fact that it has only one source of White mana (a Glacial Fortress) get in its way. Next is the Blue member of the Phyrexian mana cycle, the Spined Thopter. A 2/1 flyer instead of a 3/1 first-striker, the Thopters are just the ticket when the red zone begins to get clogged up on the ground. Best of all, being on-colour means that you aren’t forced to pay for it in life, though the deck certainly encourages you to do so if it means havign that much more aggressive a turn.

For tempo advantage, you can do worse than the playset of Æther Adepts, who bounce a creature to its owner’s hand when they enter the battlefield. This Unsummon-on-a-stick will often best be used to clear out a particularly nettlesome defender so your ground troops can get stuck in for another round of damage. Finally, a pair of Grand Architects exploit another one of the deck’s subthemes- powering out fat artifact creatures. The ability of the Architect to turn all your Blue creatures into limited Palladium Myr is not to be underestimated, as the right series of plays can find you playing the deck’s Steel Hellkite as early as turn 3. This also helps reduce the cost of the Legionnaires and Thopters, giving you the ability to play multiple creatures at once to flood the board for a huge momentum gain- just watch out for Day of Judgment. That the Architect also boosts all of your Blue creatures an additional +1/+1 keeps him relevant when drawn at any stage of the game.

A trio of Phantasmal Dragons checks in at the four-drop slot as we enter closer territory, and it’s hard to beat a 5/5 flyer for only four mana. From there we have a Precursor Golem, giving you nine power of creatures over three bodies, and the Steel Hellkite. The Hellkite in particular will close games out all on its own if left unchecked, though the environment is still heavy with removal to deal with even it’s substantial size. It’s a bit of a puzzle why the Golem made it into the deck over another, more synergistic rare, especially after its inclusion in New Phyrexia’s Artful Destruction. 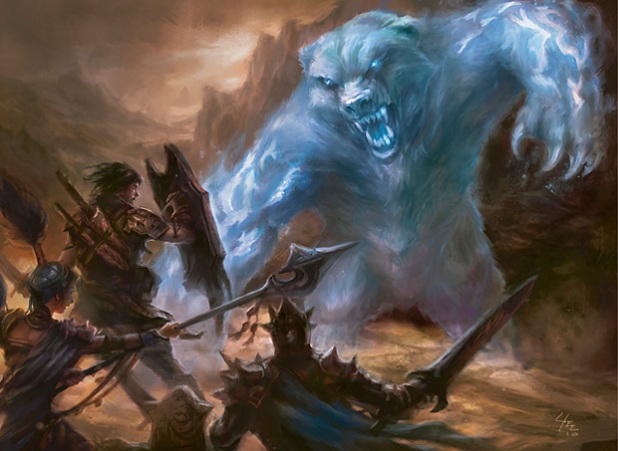 As you’ll see, almost all of the heavy lifting in Illusionary Might comes from its beaters- the noncreature support package is rather simple in comparison. Here, you have access to three different spells- that’s it. For digging through your library to find the pieces you need you are given a playset of Preordains. You get a suite of countermagic with four Mana Leaks (though the deck’s player’s guide sagely warns you that countering a spell that targets one of your Illusions won’t keep your creature alive- it’s already been targeted, and therefore dies). A trio of Mind Controls pull the double duty of eliminating a threat from your opposition, and giving it over to you. As you might expect from a mono-Blue deck, removal is virtually nonexistent, though that’s not to say that you’re helpless in the face of creature threats. In addition to the Mind Controls, the Mana Leaks can take care of something nasty on the way in if need be, and those Æther Adepts will get it out of the way- at least for a turn. Mainly, however, this deck wants to be the beatdown, letting your opponent worry about reacting to it.

One additional complement of support comes from a less-expected source: your land. In addition to the singleton Glacial Fortress, which is there to give you some hope of hardcasting a Procelain Legionnaire (especially when your life total is low), you also have a playset of Glimmerposts. Representing a gain of +10 life (in the unlikely event you land all four on the battlefield), they are there primarily to give you some cushion against the heavy toll the Phyrexian mana creatures can take on your life total.

The Absence of Heat

The sideboard for Illusionary Might is a rather busy affair. you have some additional countermagic in the form of a pair of Negates and a Stoic Rebuttal, the latter a strictly better Cancel that you stand a reasonable chance of getting at its metalcraft discount. There is also a playset of Neurok Commandos, ostensibly to be brought in against slow-to-defend control decks and gain you recurring card advantage.

If instead it’s creature-based damage you’re facing down, a pair of Frost Breaths should help keep things calm, and there’s a fourth Mind Control as well. Finally, a few targeted hosers give you pinpoint advantage. Two Flashfreezes can shut down a Red or Green spell, while a trio of Master Thieves can give your artifact-loving opponent fits (which should nicely complement the fit you’re having for paying

That’s all the time we have today for Blue aggro. Join us agin in two days and we’ll be taking a look at the deck’s companion, Vampire Onslaught, which takes an altogether quite different approach to its aggro construction. Then we’ll be taking the decks into battle against one another to see how well they hold up. Thanks for reading!