Whispers of the Muse: Stric9’s “The Sparkler” 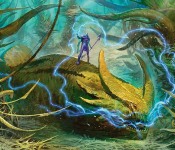 Welcome to the next installment of Whispers of the Muse, the occasional feature where a reader submits their tinkering of a precon deck and look for constructive criticism and feedback from the community. Time to put on the thinking caps, because we’re going way back in Magic’s history! Today we’re hearing from Stric9, who’s begun working on Stronghold’s The Sparkler. Here’s what he had to say:

Speaking of Whispers of the Muse, I finally built up the nerve to crack open my sealed deck “The Sparkler.” Lo and behold! It has a copy of Whispers of the Muse. That’s the first time I’ve owned that card. For those of you who may not know, “The Sparkler” has been mentioned quite a few times in different articles both here on Ertai’s Lament as well as on Quiet Speculation. One of the main reasons it gets any discussion at all is because of its extremely unique nature. Going through the cards, it has only 3 creature cards. Yes, that’s right, THREE creature cards. And, no, they’re not bombs either. Can you imagine buying a pre-con like that today?
But this is old school Magic. This is a deck from the way it used to be played. I’m talking about grinding out an agonizingly slow win against your opponent through domination and frustration. If you never played during the era of Revised and Ice Age when cards like Winter Orb were present then you’ve probably never had the experience of playing a game that has lasted more than 20 turns. Don’t get me wrong, I love the way Magic is played these days. I love racing out the gate and having Terra Stompers do my dirty work on turn 4, but I wonder if this deck could be made viable with today’s cards. It would certainly need to be updated and I could only play it a Legacy tournament, but I would love to give it a chance.
The object of the deck is to counter any and every thing they have so that they’re completely powerless to act. Then, when they finally are able to cast something, you snatch it away and use it for your own machinations or burn your way there is necessary. The deck comes with an insert featuring the basic decklist for players just being introduced to the game (I feel sorry for anyone who wanted to learn Magic by buying this deck) which you can find here. There is also an “advanced” decklist that features quicker counterspells, more rares, and emphasizes using the sideboard to really dominate your opponent. My deck is modeled after this advanced version.
I’m sure this doesn’t need to be said, but recommending power-9 cards won’t be helpful nor will recommending cards that are ridiculously expensive (although I do own one copy of Force of Will in my Alliance’s set). I’m sure this will be a step outside many readers’ comfortable meta-game, but I’d really like to get some feedback since I’ve never been there either. My decklist is as follows:

So a wide-open card pool to draw from, where Stric9’s using most any card in the game. Don’t worry if your knowledge of the older sets isn’t peerless- if you think he should swap out Accumulated Knowledge for Treasure Hunt, or reaplce Pyroclasm with Slagstorm, by all means suggest it!