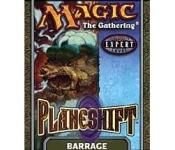 Finally, we come to the last of the Planeshift preconstructed decks as we close on completing the series. As it happens, Barrage is the most seemingly straightforward of the lot, promising unrelenting aggression with a goal of early blowouts. It seems a fair inclusion, as Planeshift’s run has been marked by decks of remarkable intricacy- the kind you see a lot less of today. Not a single one of the deck’s 27 creatures is vanilla- to the last they all have some additional attribute or ability. That seems par for the course.

So what does Planeshift’s version of an aggro deck look like? Let’s find out, beginning as we should with the beaters.

As is apparent from the mana curve, the deck is almost overloaded on the front end with cheap, aggressive critters:

There’s a small dose of utility here with a pair of Apprentices (Thornscape and Thunderscape), but its other one-drops are a miss. The Mogg Sentry– one of the deck’s rares- is a novel card, but as its very name suggests it is optimised for defense. Sure, you’ll get some bonus on attack from the occasional combat trick or instant, but overall there’s too much reliance on what your opponent does or doesn’t do to make him worthwhile on the attack. In a deck designed around blistering aggression, this is a total miss and a waste of a rare slot.

Finally, there’s the LLanowar Elite. While we’re all for the flexibility of a 1/1 trampler that can be kicked into a 6/6, these days a 6/6 trampler costs a lot less than nine mana. When exactly did the designers expect you to have nine mana sitting around in a deck designed to fire right out of the gate and never let up? And how useful is a 1/1 trampler, anyway? It might have been decent for it’s time, and the flexibility is noteworthy, but you have to hope this isn’t a sign for what’s yet to come.

The deck clearly optimises for two mana, packing in a ton of options at that slot. Let’s look at these hyper-aggressive options. Two Nomadic Elves, which are essentially mana-fixing bears? Three Thornscape Familiars, to reduce the cost of Green spells? A Mogg Jailer who very quickly often becomes unable to even attack? A Gaea’s Herald?? Are we joking here?

Anyone who’s ever faced down an aggro deck knows that countermagic isn’t the best solution to their creatures- they’re inexpensive, easily replaced, and become disposable quite quickly. This isn’t where you’re saving up mana after mana to cast some gargantuan beater, only to shriek to the heavens when your opponent reveals a Mana Leak at your moment of triumph. The Gaea’s Herald would be a welcome addition into a Green deck filled with Wurms and other fatties, to preserve your investment, but here it is a dreadful misfit.

Let’s face facts, Barrage: seven of your ten two-drops are ill-suited for your purported strategy, and both your rares are wasted.

The Thunderscape Familiar, having first strike, is marginally better, while only the pair of Horned Kavu offer any redemption for the slot.

Moving on to the three-drops, we snote something else with dismay- each of them is a 2/2. That means that right off the bat we’re getting a bad deal based on power/toughness alone, so they are either conditional or utility critters. The Amphibious Kavu is a fine example of the conditional- a ripoff if you’re not playing against Blue or Black, and an absolute gem if you are. The two Alpha Kavus are poor inclusions- overcosting to compensate for a solid special ability is fine, but pumping toughness at the expense of power is not solid here (pumping power at the expense of toughness is really what’s needed).

It doesn’t get much better from there. The Kavu Recluse is a complete joke- again, overpaying for a nearly useless ability- and the Caldera Kavu’s cost is only justified by the fact that you can pump it with Black mana. Note: this isn’t a Black deck. Sure, you have some mana filters, but hardly enough. Another sour note.

That leaves only the Thunderscape Battlemage, which is fine under the right circumstances but only begins to optimise in the mid-game, like all such Battlemages.

Things start to improve with the four-drops. The Root Greevil, with its hilariously bad flavour text (paging Geordie Tait), is targeted enchantment hate, but too restrictive to be useful. This is another example of a card that would be a reasonable-enough inclusion in a slower deck, but not one that promises to “deal 20 damage before your opponent knows what’s going on.” Sparkcasters and Flametongue Kavus– two apiece- are much more inline what that sort of strategy, and meet with approval.

That leaves the Serpentine Kavu, who also is appropriate for the deck and a fine top-of-curve beater. But overall, this is a very motley crew indeed.

Is there anything that can turn around this dreadful display? There are ten noncreature spells included here, and we’re sorry to say there probably isn’t much that could salvage the deck. There’s the token combat trick (Explosive Growth), and a modest burn package (Singe, Simoon, Scorching Lava, and Magma Burst). Naturally, there’s a pair of accelerants (Fertile Ground), because we all know that a deck with almost 40% of its creatures as two-drops needs to rocket into the mid-game as fast and reliably as possible.

From there, we have a dash of land destruction (Implode), a critter booster (Fires of Yavimaya), and Assault // Battery, one of the split cards that gives added versatility.

All in all, the deck seems a startlingly poor construction. Care must be taken, though, not to be unduly harsh by overlooking the standards of the day. Creatures have in recent years seen a “power creep” in terms of what you get for your mana, and the collection assembled here are well behind it. That being said, these are still some fairly poor choices, and certainly better ones existed in the block.

Our vitriol might well have been reduced if the deck itself didn’t proise to blow your opponent out of the water with blinding aggression. Perhaps in some alternate reality lived at half-speed Barrage might be considered fast. But alas, not in this one. For posterity, here’s your combined curve:

Join us next time when we take it to battle, and see what it’s capable of when put to the test.