Halfway through, Planeshift has asked for some very subtle and/or unusual things of its pilots. Comeback was a deck riddled with enters-the-battlefield and gating shenanigans, while Domain in some respects was not unlike the scene in Braveheart where the Scots deploy the long spears against the English heavy horse. “Hold! …. Hold! …. Holllld!!” as the enemy bears down upon you, before you hit your four or five different basic land types and can unleash to devastating effect.

Today we’ll be returning to a more traditional-style deck, all the more familiar with the return of Kicker (and advent of Multikicker) in Zendikar and Worldwake. For those familiar with cards like Kor Sanctifiers or Gatekeeper of Malakir, the Battlemages should be a most comfortable fit. A cycle of five 2/2 Wizards, each Battlemage has a pair of kickers available to it, one for each friendly colour, that give it some versatility with added enters-the-battlefield effects. A Thornscape Battlemage, for example, is the Green version, and thus has a Red kicker and a White kicker. The Red kicker acts as an added Shock, while the White one destroys an artifact. Dreadfully inefficient if played without kicker (a 2/2 for three mana), they nevertheless become quite versatile indeed from the mid-game on when one (or both) effects can be added.

Scout lays a lot of its force on the backs of the Battlemages, including a package of six of them. These form the nucleus of an otherwise more conventional beaters-n-utility-creatures deck. 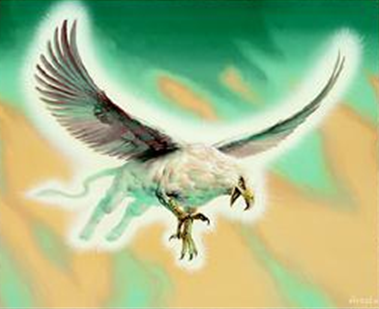 Blessed with Many Options

To begin, let’s take a look at the creature element in total. Here’s the mana curve:

As alluded to above, the creatures of Scout can be rather broadly divided into two categories: utility and beater. There is some overlap between the two, adding a welcome layer of intricacy to the deck, but overall it’s about a 50/50 split.

The utility creatures are where you’ll find your Battlemages, but a lot more besides. In a deck as mana-hungry as this one can be (to take advantage of all those kickers!), the good news is that there is plenty of ramp and fixing available. Singletons Quirion Elves and Nomadic Elf, along with a pair of Quirion Explorers, let you get a little edge on consistently hitting your mana curve. As you’ll see later, the deck also has thought to include a few mana dumps, so even after they’ve served their purpose to get you to the mid-game efficiently, they’ll have some purpose for the rest of the game. Also worth mentioning here is the lone Thornscape Familiar, which reduces the cost of Red and White spells.

Next up are your six Battlemages, two each of the Thunderscape, Thornscape, and Sunscape Varieties. With a removal suite almost nonexistent amongst your noncreature spell options, play these wisely! The Thornscape will be your most reliable Battlemage, as both his kicker abilities (the Shock and the destroy target artifact) are on-colour for this deck. You’re also able to bring out a little enchantment hate with the Thunderscape, and destroy a flying creature outright with the Sunscape. A lot less reliable, but occasionally available, are the off-colour kicker abilities on the latter two Battlemages. Rustle up some Black mana, and you can hit your opponent with some discard courtesy of the Thunderscape wizard. Get your hands on some Blue? The Sunscape can let you draw a couple of cards. Any of the four ramp/fix Elves can snare you off-colour mana under the right circumstances, so don’t count those out.

Finally, we have a trio of misfits, but that’s not to say they don’t have their place. The Thornscape Apprentice is your standard ‘guildmage’ build, but keeping with the Battlemage colour scheme of relying upon allied colours. Cheap and versatile, he’ll be valuable at any point in the game. The Aurora Griffin is an expensive flyer, but for the added cost you get the ability to turn any permanent White until end of turn. This isn’t the most useful of abilities, but there are two of your beaters that ‘gate’ a White creature back to your hand, so you might use the Griffin to return creatures you might not otherwise be able to (a Stormscape Battlemage for recasting, perhaps?). Overall, overcosted and underwhelming. Finally, you have the Slingshot Goblin, which is a similarly poor card. A Blue colour hoser, he’d be a fine inclusion in a deck which could do more to manipulate the colours of creatures (for example, Tidal Visionary from Comeback), but this deck has no such option. If you’re not playing a Blue mage, he’s simply an overpriced bear. 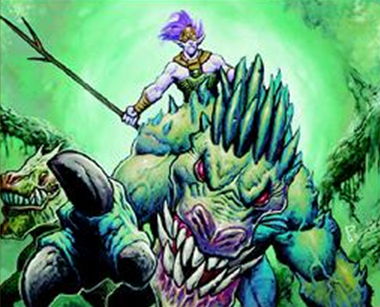 Bring Along Some Muscle

Now we turn to the beefier end of the spectrum for the deck’s beaters- it’s primary win condition. Don’t be fooled by the presence of Green, the “beefiest” beater tops in at a modest 4/4, so this will have something of a swarm/beater hybrid strategy. That said, a lot of these creatures bring tricks of their own to the table, so you’ll still have a wealth of options most of the time.

As mentioned in the previous section, there are a few of the set’s ‘gating’ creatures found in Scout. The stoutest of these is the Steel Leaf Paladin, but you also carry a Fleetfoot Panther and Horned Kavu. You’ll need to strike a balance between playing them early (to get bodies on the board) versus playing them late (to return more tactical critters back to your hand), but it’s always good to have options and the tension adds to the deck’s skill level.

Next up are a pair of creatures that play games with damage. The Radiant Kavu is a fine enough deal- three mana for a 3/3 (albeit a bit particular about the colours)- and that makes its shutdown ability a nice bonus. He’s fine on curve against any deck, but packs a nasty little surprise for your Black or Blue opponents. Then we have the Mirrorwood Treefolk, who has a somewhat pricey damage-redirection ability. That this targets either creatures or players makes it eminently playable, and he’s not the worst deal you’ll find in terms of cost.

That dubious distinction might go to the Viashino Grappler, who is a 3/1 for three mana (with Haste if you throw in a fourth). The Rampant Elephant is a similarly unimpressive deal, but with a somewhat more useful ‘Lure‘ ability. The Amphibious Kavu continues the deck’s happy tradition of hating on Blue and Black, while the Ancient Kavu is a slightly better deal- a 3/3 for four, with a minor colour-dropping trick.

If the deck has anything earmarked as an obvious closer, it’s the trio of Stone Kavus. A five-mana 3/3 is no great shakes, but the ability to dump your leftover mana on both ends of the beastie can make him a very formidable attacker later in the game when you have more to spend and less to do. 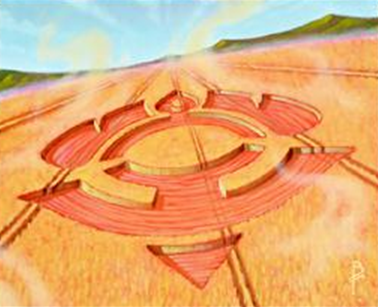 Next we move over to the dozen noncreature support cards, which are a decidedly mixed bag. You have additional ramp/fix options in a Harrow and two Fertile Grounds, and with the game’s (somewhat lamentable) evolution away from land destruction your Grounds won’t leave you very vulnerable to getting two-for-oned like a creature aura might. There’s one of those as well- the Armadillo Cloak– which has a very strong effect for a minor mana cost. In that, it’s at least somewhat worth the risk, but as always deploy carefully.

Next for the mish-mash, you have a pair of combat tricks (Gerrard’s Command), which due to the ‘untap’ part can be seen almost as ersatz removal on their own. There’s a singleton Pollen Remedy, which is a strictly better Healing Salve. An Eladamri’s Call acts as a Worldly Tutor, but for the single extra mana you don’t have to lose a draw- the perfect ‘Swiss Army’ style card to get the rigth critter at the right time. Finally, a Rith’s Charm gives you the usual array of options.

If there’s a disappointment here, it’s in the burn suite. They’re clever, to be certain, but neither the cantrip effect nor the colour shenanigans change the fact that Singe and Zap deal only a single point of damage. That said, don’t forget the ways that this deck hates on Black and you might find Singe a useful trick from time to time. Lastly, there’s Magma Burst, which is terribly costed but with a somewhat reasonable kicker (trading useless late-game lands into more damage). Sadly, you can’t deal both doses of damage to single target, which is probably the ability we’d want to see to be excited about this card.

As you can see, although more straightforward in approach than Comeback or Domain, there’s still plenty going on under the hood. To keep things lubricated, the deck packs in six nonbasic lands- a pair of Rith’s Groves, a Geothermal Crevice and Irrigation Ditch to go off-colour in a pinch, and a Shivan Oasis and Elfhame Palace for simple dual-colour production.

Initially we weren’t all that excited about the Planeshift decks, but the more we dig into them the more nuanced and intricate they appear. We continue to be impressed with the quality we’re seeing, and will be taking this deck into battle shortly. Come back in two days’ time, and we’ll let you know how it held up!