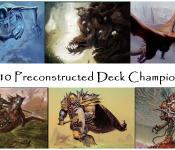 And we’re back, sports fans, with the second half of our thrilling Nagle Division coverage! It’s been a stellar clash right out of the gate, with some early favourites getting short shrift from their upstart rivals, and some strong showings from dark horse contenders like Ears of the Elves and Eyes of Shadow. The Nagle Division was initially thought a little less deep in talent than the others by dint of the fact that all three Duels of the Planeswalkers decks ended up being drawn into this Division, but they’re keen to show what they can do!

These competitors are shuffled up and ready to go, so let’s not keep them waiting!

Ears of the Elves versus Brute Force

Brute Force surprised more than a few with its upending of The Adventurers, but perhaps it’s feeling some “home field advantage” being a Worldwake deck in the Nagle Division, as Kenneth Nagle was the Lead Designer! It seems some measure of overconfidence has set in, however, as the Elves get fast start- Elvish Eulogist, Imperious Perfect, and Jagged-Scar Archers, with the Elven Riders not far behind. Brute Force’s defense of a Borderland Ranger, Giant Spider, and Goblin Roughrider get outclassed early and they never really contend. If Brute Force thought it would be walking through this one, they’ve just received a wake-up call!

After early weenies, Brute Force lands a Canopy Cover on a doublekicked Gnarlid Pack, putting Ears of the Elves on a very short clock. Next turn, with three Elves already on the board, Ears plays an Elvish Champion, putting Force on an even shorter one. Elves love the Green in Force: Forestwalk and a ton of lifegain from the early Wurm’s Tooth. Force gets off a quad-kicked Wolfbriar Elemental, then next turn alpha strikes while Act of Treasoning Ears’s best blocker (a newly-played Elvish Warrior). After Eyeblight’s Ending the Elemental, Force is still putting 19 power across the board, and the Elves are at 19 life. Forced to chump the Champion, the Elves sputter out of gas juuuust shy of winning (Force was down to 2 life). It’s going to a third game!

Brute Force starts early with Goblin Roughrider, graduates to a once-kicked Gnarlid Pack and a Giant Spider. The Elves are blisteringly aggressive and mean business, however, smelling victory. A pair of Elvish Visionaries, a Gaea’s Herald and Talara’s Battalion hit the field in short order. With twin Eyeblight’s Endings in hand alongside a Giant Growth, the ending is a foregone conclusion. Brute Force left everything on the field after being shocked from complacency in Game One, but it just wasn’t enough.

WINNER: Ears of the Elves

Eyes of Shadow vs Teeth of the Predator

With Ears of the Elves defeat of Brute Force, it’s going to be an all-Duels of the Planeswalkers divisional final, and both Liliana and Garruk are eager to see their junior decks advance. A first-turn Rack and devastating Mind Rot (taking a Giant Growth and Howl of the Night Pack while sitting on 6 land), however, aren’t quite enough as Liliana’s critters are scarce. She’s having to make do with a Severed Legion for most of the game. Meanwhile, an early Troll Ascetic and Trained Armodon did the bulk of the heavy lifting for Garruk. Twin Demon’s Horns only delayed the inevitable.

Liliana’s playing the game her way this time, with a pair of Abyssal Specters, a Dusk Imp, and an Underworld Dreams. A Giant Spider holds some of the air force at bay, but quickly Garruk’s hand is exhausted. A Bear and a Civic Wayfinder aren’t nearly enough, and the one threat Garruk does manage- a Spined Wurm– is immediately Terrored. Liliana’s removal is proving the difference, but can she keep it up?

Feeling mometum on her side, Liliana starts fast and never lets up. Garruk stumbles, stuck on two land for a few turns with a Civic Wayfinder maddeningly in hand. His double Wurm’s Tooth would be solid, except you actually have to cast Green spells to benefit from it. An Abyssal Specter and Sengir Vampire with matching Unholy Strengths and a Megrim on the ground wrap things up, and assure Eyes of Shadow a chance at the Divisional title!

Nagle Division Final: Eyes of Shadow vs Ears of the Elves

It’s been quite the path both of these decks have taken to arrive here, but unfortunately only one of them will be advancing on to contend for the Conference title and a shot at winning it all! Thus far, Ears of the Elves has the distinction of being the favourite, but anything can happen on the battlefield.

Unblockable and dangerous are the name of the game, with Liliana’s Severed Legion and an Unholy Strengthed Crowd of Cinders getting in for loads of damage, before Nissa’s Eyeblight’s Endings put a stop to all that. But the damage is done- despite the strong Elven Riders and a late Elvish Champion, a Consume Spirit to Nissa’s face for lethal quashes any hope of a rally.

Nissa redoubles her efforts on the field determined not to let victory slip from her grasp. A turn 2 Elvish Warrior starts things off, and she presses the attack with Elven Riders and even the Drove of Elves… but Liliana seems to have no shortage of removal, throwing around Terrors and Consume Spirits. An Unholy Strengthed Abyssal Specter and a Severed Legion pound in turn after turn, and Nissa can only hold out for so long. But no help is coming, and Eyes of Shadow advances. A shocking upset!

And there you have it! Your Nagle Division winner is Liliana Vess’s Eyes of Shadow from the Duels of the Planeswalkers. She’ll be eagerly watching the Tinsman Division results to see who she’ll be facing for the Rosewater Conference finals and a shot at winning the 2009-10 Precons! Signing off for now, stay tuned for the start of the Tinsman Division action!