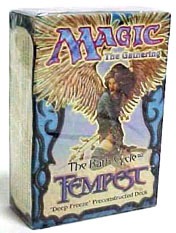 In 1997, a series of events occurred without which there would be no Ertai’s Lament. The first of these events- the overarching theme- was the release in October of the start of ‘the Rath Cycle’ with Tempest. Tempest is, to date, my favourite set, as enshrined, ensconced and untouchable as most any other long-lived memory (I was 22 then), and I had returned to the game relatively recently after taking a couple sets off.

I’d first started sensing something different with Magic during the Weatherlight set. I’d picked up a box of Mirage and Visions which, while intriguing, seemed as loosely-threaded as previous expansions of the game. But beginning with Weatherlight, Magic had the start of something new: a story.

Certainly there were stories before- wasn’t Antiquities about the Brothers’ War? And Legends was almost like a hundred different snapshots of a hundred different stories, characters and spells seemingly from some mythic age. The Dark? Fallen Empires? More of a narrative than a story. No, Weatherlight had something the others didn’t, which was immediacy and continuity- characters whose story was in the midst of being told rather than retold. And then a few months later, Tempest took the concept and ran with it.

There was something amazing then about being able to lay out a number of the cards from the set and watch the tale unfold like a comic book, but while I could eulogise the set for another three columns, I should move now to introducing that second related event that was in essence the seed that brought us to Ertai’s Lament: Wizards released a new product for Tempest, the preconstructed deck.

There were four of them, and the first one I ever picked up was Deep Freeze. I recently had the opportunity to reacquire it, and give it the Lament treatment- to “see it again for the first time.”

The instruction manual write-up for the deck hailed Deep Freeze as a “classic control deck” that would dominate through “counterspelling and creature control cards.” That isn’t to say that it didn’t have a creature complement, but it was somewhat muted (being only 1/3 of the non-land cards in the deck). In both critters and spells, the deck desperately wanted to get to three mana early, as most of the cards came on-line once that threshold was reached:

By today’s standards, Deep Freeze may seem somewhat quaint, but it’s intriguing to see what Wizards was trying to accomplish with these new preconstructed decks (which were obviously a success- they’ve been releasing them for every expansion ever since). In many ways, this deck was a greatly superior product to the precons we see today, for a number of reasons- and not all of them bad.

The deck begins with a pair of two-drop utility creatures, the Master Decoy (we know these today as the Blinding Mage). Of course, its the nature of a good utility creature to be useful whenever it is played, regardless of the stage of the game, and the Decoys provide some lockdown control for an enemy’s best critter.

Following that, we have an abundance of three-drops! The deck packs in a pair of Soltari Lancers, who are a bit underwhleming with the cost and conditional First Strike, but have evasion in Shadow. Continuing the evasion theme, there’s also a pair of Wind Drakes and a Sky Spirit. Board control on the ground is furthered by two Horned Turtles and a Knight of Dawn.

Beyond that there’s little to play with here: a Cloudchaser Eagle for enchantment removal, and one of the deck’s top-end Rares, the Avenging Angel. Although the Angel might not hold up well with age (see: Baneslayer Angel), we should remember that when the game was young, the power of creatures was kept deliberately low so that they did not overrun the game. It would take some years’ experience for Wizards to begin to grasp the true cost/benefit pricing for this most ubiquitous permanent, and in a permission deck a recurring critter is not a bad fit.

It is, however, in its spells that the deck truly blossom, for while creatures are its only win condition, it places a high premium on protecting them.

“There is Nothing You Can Do That I Cannot Simply Deny”

The bulk of the non-creature offerings in Deep Freeze fall into one of two amply-represented categories: countermagic and removal. The removal suite runs deep and varied, with no less than eight options available (nine if you count the lone Disenchant). This is how it’s done! Modern decks have tended to place the aim of ‘showing off’ the features of a set first, and being actual, effective decks second. The inagural four decks began with these priorities reversed, giving you plenty of muscle to deal with an enemy’s beaters. Two Gaseous Form, two Repentance, three Pacifisms and a Time Ebb ensure that at most any point in the game, you’ve either got removal in hand or are about to draw into some.

Protection for your plans comes in the form of an equally generous serving of courters. With three Counterspells, two Dismisses, two Power Sinks and a Spell Blast, you had a much better than average chance of disrupting your opponent’s best laid plans, and protecting your assets on the ground.

The deck to its core grapples with that element most modern preconstructed decks wantonly ignore: variance. By giving a smaller number of cards a greater presence through multiple copies, it allows its pilot to have greater draw consistency and therefore, a more predictable play experience (contrary to how this sounds, predictability is a good thing in Magic if you are looking to win). We’ve been pleased to see variance decrease with the Scars of Mirrodin decks, and hope for a return to this trend in future sets!

Join us next time when we take Deep Freeze up against another of the Tempest precons, and see how well this first-of-the-series matched up against its rivals!