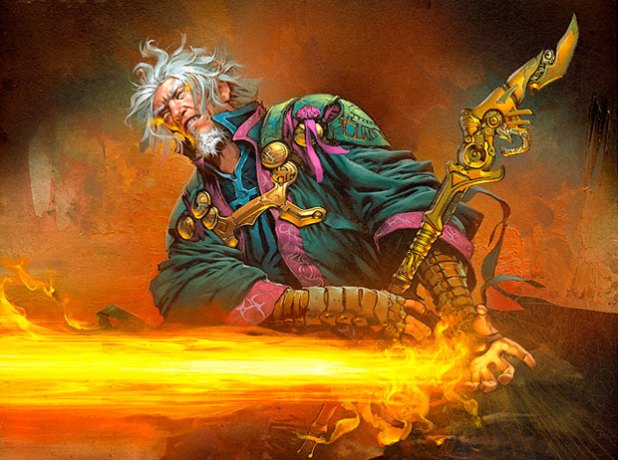 Like any high drama, Phyrexia vs The Coalition puts its heroes in something of an underdog role. Having set the stage for the villains- the Phyrexians with their mono-Black artifact-heavy deck- we now turn our attention to their foil, The Coalition. A five-colour deck under even the best of circumstances can have quite a task cut out for it, and by most any yardstick, a five-colour versus a mono-colour can indeed be quite the underdog.

This assumes a certain relative parity in power level, of course. A mono-Red deck featuring the very worst of the Goblin cards throughout Magic’s history will probably come up short against a five-colour control with full dual land suite. But as we touched upon in the previous column, the designers of this Duel Deck had to give particular attention to balance.

For the Phyrexians, this manifested in subtle “drags” on a traditionally rapid start: only two Dark Rituals, lots of mana sinks, etc. For The Coalition, it’s even more fundamental: it’s a five-colour deck.

We typically gloss over the lands in a particular preconstructed deck, because they tend to be very straightforward: here’s a big stack of X, a smaller stack of Y, and a singleton specialty land for variety. However, for The Coalition, the land is the perfect place to start, for without a solid grasp of the deliberate mana base any pilot will be at a severe disadvantage.

A World Possibly Not Born

“Effective use of terrain is a lesson good commanders learn quickly.”

In descending order, let’s first review the basic lands included in this deck:

This tells you a number of things about the deck right away:

1. It’s primarily Green (obviously). It could be no other way: only Green has the consistent tools to make this level of five-colour deck work. Witness these critical mana fixers: Nomadic Elf, Quirion Elves, Yavimaya Elder, Fertile Ground, Harrow

2. Blue and Black are included for just a splash of utility (as well as helping bolster Domain cards and allowing for flexibility with the Battlemages, more on that later). Indeed, there are only three Blue and Black cards in The Coalition: Allied Strategies, Evasive Action, and Exotic Curse. If you noted that all three of these are Domain spells, bonus points for you. In addition, they are necessary for two of the three Legendary Dragons and their respective Charms (Darigaaz, the Igniter and Treva, the Renewer).

3. The presence of only one Swamp and Island in the deck suggests a “toolbox” approach here, relying upon fetch-effects to bring them into play rather than just probability. This is vital to understand: under most circumstances, you should have an adequate supply of Green. Use early fetches to round out your White and Red, and use later fetches when they arise to grab the Swamp and Island as needed. Woe to the player who neglects their Plains and Mountians just to bring a Blue or Black spell online- this will usually be a poor decision. The fetch-effects are plentiful, and are as follows: Harrows, Yavimaya Elders, Terramorphic Expanses (three of them, actually)

In addition, the deck complements its basic land collection with a pair of duals: Elfhame Palace and Shivan Oasis (again, Green is the common thread).

Although daunting, the deck is well-constructed, and should find little restrictions on playing most of its spells- albeit somewhat more slowly than Phyrexia. The key for The Coalition, then, is to weather the early rush and get itself established, where it’s higher back-end power level can take control of the game.

The Banner of War

Like Phyrexia, the bulk of The Coalition’s creatures are not esepcially robust- the 2/2 (or less) tends to run the field. And in a further similarity, the bulk of the deck’s forces are concentrated in the 3-drop slot. The curve, though, is relatively healthy:

Broadly speaking, the creatures in the deck can be devided into three broad categories: Mana Fixers, Utility, and Beaters.

The Mana Fixers are as important to the deck as the land, and relying upon land draws alone will spell a quick demise. A pair of Nomadic Elfs and a Quirion Elves offer very useful flexibility with mana. The two Yavimaya Elders offer at the very least card parity, and often card advantage with their put-into-graveyard replacement. The two-Green requirement for the Elders represent a unique position in the deck- nothing else is as colour-dependant, but being of the deck’s primary colour this should provide little hindrance.

The Utility critters are one of the deck’s real midgame strengths. With a host of optional kicker-based effects, the Battlemages (Sunscape, Thunderscape, and Thornscape) are something of a Swiss-Army-Knife-styled approach to your foe. Just by paying kicker costs, each 2/2 body can also select up to two of the following effects: destroy a flying critter (though Phyrexia runs few), draw two cards, force your opponent to discard two, destroy an Enchantment (again, very few in Phyrexia), destroy an Artifact (huge) or deal two damage to a critter. With Artifacts being heavily employed by Phyrexia, the Verduran Emissary’s kicker is an added bonus, and the pair of Thornscape Apprentices can aid combat or tap down an opponent’s beater.

By the time you’re transitioning into endgame, you’ll likely have stabilised your land situation and used your Utility critters to strong effect to claw back some tempo from the still-quick Phyrexians. Now it’s time to pull out the beaters and finish the job, and The Coalition gives you four solid choices (Charging Troll is listed here, but barely). The deck packs in three Legendary Dragons: the aforementioned Treva and Darigaaz, as well as Rith, the Awakener. Not only are these 6/6 Flyers, but they also have some added optional special abilities for a little extra kick. And really, what Coalition would be complete without Gerrard Capashen? 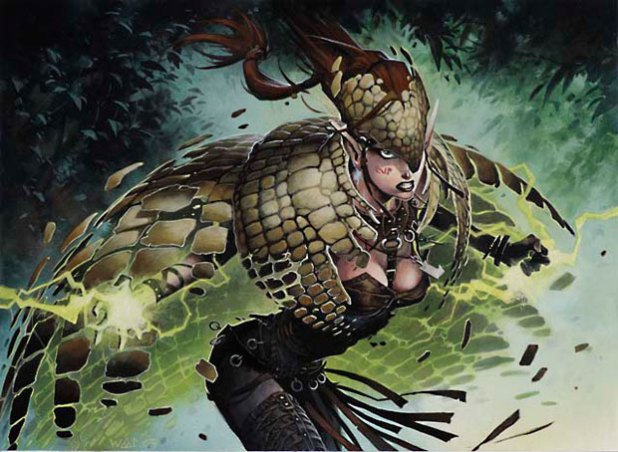 The Best and the Rest

Unusually for a preconstructed deck, The Coalition packs in more noncreature cards than creatures. Part of this is obvious and was discussed above: mana fixing (Fertile Grounds, Harrows, and Coalition Relic). The rest are a mixture of utility and Domain spells, including three Charms with tremendous flexibility.

The Coalition is somewhat light on removal, though this is offset by some degree by the direct-damage capabilities of the Battlemages. You’ll still want to make every removal spell count: Tribal Flames and Urza’s Rage are your only direct-damage spells (and Rage is really in here for flavour more than usefulness. It’s uncounterability is useless against mono-Black Phyrexia, and if you have survived long enough to have the mana to pay it’s massive kicker you should already be winning the game). Exotic Curse is another, more circumspect way to kill a critter.

Most of the deciding, then, will be done in the red zone, either through combat tricks (Gerrard’s Command, Darigaaz’s Charm, Rith’s Charm and- arguably- Narrow Escape) or creature enhancements (Armadillo Cloak, Power Armor). Evasive Action and Allied Strategies give you a splash of Blue for two of Blue’s specialties: countermagic and card drawing. For the curious, here is how the whole deck curves out:

Overall, the deck shows enough balance and promise to work provided it can establish itself beyond the first few turns. Pilots should take care to hold on as best they can- Phyrexia’s early rush can be ferocious, but long games will tend to favour The Coalition. The deck is very neatly designed. Given that so much of it had to be alotted for mana fixing and fetching just to be viable, the designers packed it full of cards that have various effects, giving tremendous flexibility on a per-card basis. You should have an answer somewhere for most any problem you face- the real challenge is lasting long enough to draw it.

Join us in our next column when we pit the two decks against one another and see how they stack up, starting from the Phyrexian perspective.