Archenemy: Scorch the World with Dragonfire (Part 2 of 2)

Welcome back to the last installment of our Archenemy review series! Over the past two weeks we’ve mucked about in the graveyard, tinkered with gears and cogs and danced in the rubble, but today we’re taking wing and soaring aloft on some of Magic: the Gathering’s most beloved and iconic creatures.

In short, here be dragons!

And not just any dragons, mind, but a clutch that will scorch and torch their way across the red zone, causing your opponent’s life to drop almost as quickly as his Llanowar Elf soiled itself watching them fly past. 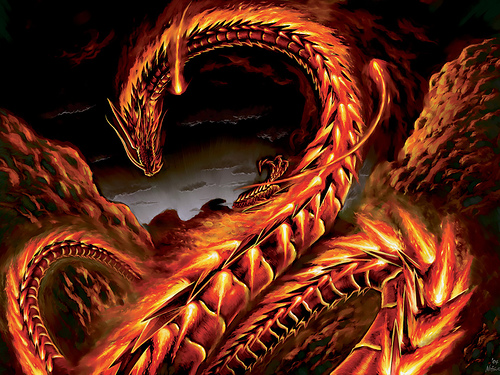 Two-Headed Dragon: The disruptor of the bunch, it can’t be blocked by less than two creatures, making it much harder to chump. Should you find yourself (momentarily) on the back-foot, it can block up to two critters as well. Oh, and it has firebreathing.

Flameblast Dragon: This one’s a nasty sniper, adding some targeted removal (or just some extra damage to your hapless opponent) to its arsenal.

Kilnmouth Dragon: Another dragon with a snipe-effect, this one uses the Amplify mechanic to hideous advantage.

Hellkite Charger: Not only equipped with haste (surprise!), the Charger can let you get in two attack phases each turn.

Ryusei, the Falling Star: Ryusei’s abaility triggers when he heads for the graveyard, a very lethal kiss goodbye.

Imperial Hellkite: A utility trickster, the Imperial has Morph and can be used to tutor up- guess what- another dragon.

And there they are, the crown jewels of the deck. But they’re far from the only dragons present- Scorch is absolutely silly with them:

Well, those last two aren’t precisely dragons, but their Changeling ability ensures that they, too, can be used for Amplify or tutored by the Imperial.

Although pricey, it’s a strong tribal assortment which is rounded out by a few utility creatures (most notably Dragonspeaker Shaman, Fierce Empath, additional Morph beaters to sufficiently camouflage the Morphing dragon). It has a daunting mana curve, as is to be expected, but Scorch does a lot of things right in giving you the ability to deploy your air force at a competitive pace. 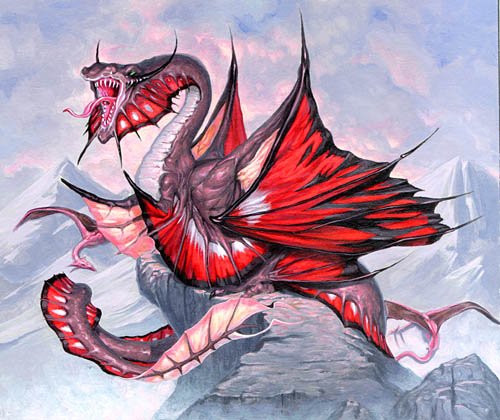 Over Here’s the Runway

So if the dragons are the apex of the deck, what constitutes its support structure? A solid deck trajectory can be constructed thusly:

Blow Up the Early Game: Your opponents will generally want to squeeze about a crop of one-to-three drop creatures to harry you with. Let ’em. Sweeper effects like Savage Twister, Volcanic Fallout, Breath of Darigaaz and Fireball will punish them. Chandra’s Outrage and a pair of Branching Bolts will provide spot-removal. The Skirk Commando and Marauder pull double-duty, acting as damage and a body. And in a pinch, Dragon Fodder can deliver a few chump-blockers while you get through the crucial early game.

Ramp: While slinging fire and keeping their attackers’ heads down, don’t forget to ramp for the dragons. A turn 2 Gruul Signet is optimum, and the Thran Dynamo can help, too. A Dragonspeaker Shaman is a gift, use him wisely by keeping him out of harms way between your third and sixth land drop (or equivalent mana base via artifacts). A pair of Seething Songs can also get a Dragon out by themselves as early as turn 4.

Rule the Skies: By now you should now start to break even, with your enemy’s ranks thinned and some ways to get those critical dragons out of your hand. Play early ones with the Whelps when you can, then drop the bombs. Dragons are deal-with-or-die creatures, and all of them reward you for aggression.

There aren’t many extraneous cards in Scorch. Battering Craghorn, Gathan Raiders and Dragon Breath seem to be there just to fill spots. The Breath is particularly disappointing- essentially Firebreathing + Haste in a deck where a number of the creatures allready come with Firebreathing as a standard feature, with the usual vulnerability of being a Creature Aura. 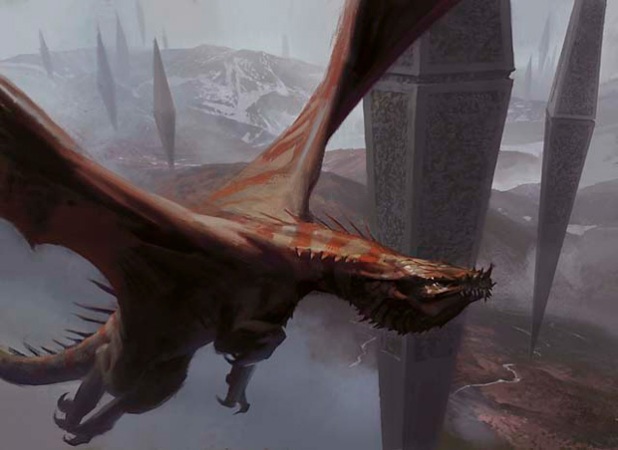 What You See Is What You Get

Like Trample Civilization Underfoot, this deck is very straightforward, and in keeping with the flavour of red can be very much feast or famine. Fast, aggressive decks in particular can eat your lunch with a bad draw, or if you don’t get a dragon out in time. On the other hand, an early Seething Song and/or Dragonspeaker Shaman can put your opponent on a very fast clock. If taking the occasional shambling loss in exchange for some glorious, wings-of-death victories is a draw to you, you’ll feel right at home with this deck. As for me, I tend to prefer a bit more consistency.